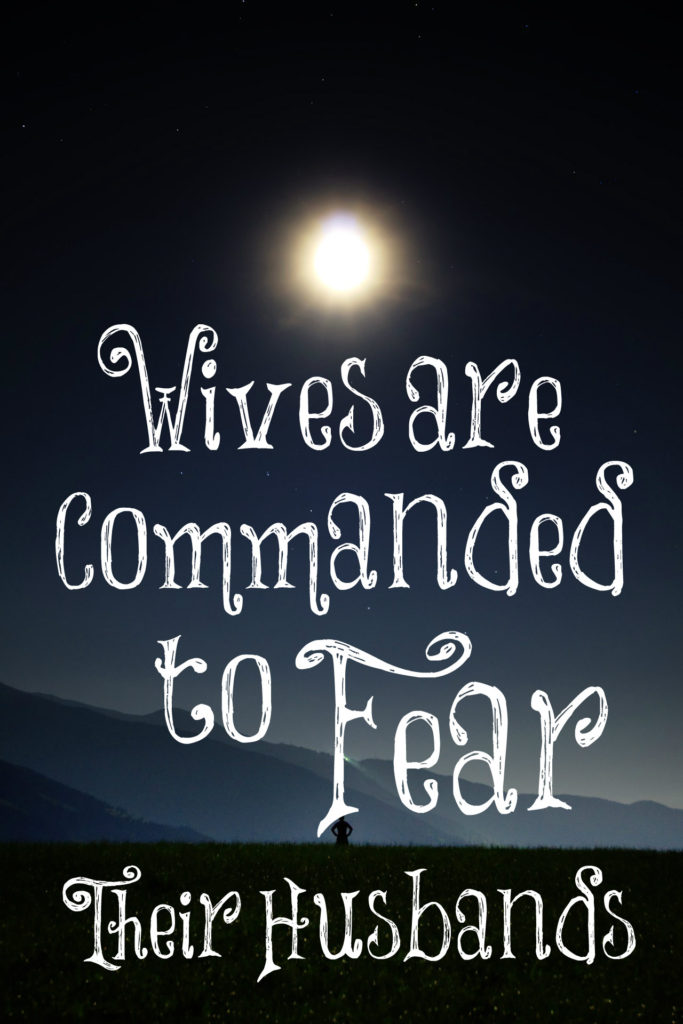 How are godly women to win their disobedient husband? By being in subjection to them without a word while they (their husbands) behold your chaste conversation coupled with fear (1 Peter 3:2). This “coupled with fear” stood out to me recently so I went to the commentaries to figure out what this meant.

Pulpit Commentary: “The close connection with the word ‘chaste, and the parallel passage, Ephesians 5:33 (‘the wife see that she reverence her husband’), make it probable that the fear here inculcated is reverence for the husband – an anxious avoidance of anything that might even seem to interfere with his conjugal rights and authority.”

Included in this list of conjugal rights of a husband as a godly wife, would be to build her home up instead of tearing it down with her own hands. Part of building her home up would be pursuing peace within her home. Most husbands don’t want to fight with their wives. They also want well-disciplined children who are pleasurable to be around.

“Coupled with fear; with reverence of their husbands, giving them due honour, and showing all proper respect; or with the fear of God, which being before their eyes, and upon their hearts, engages them to such an agreeable conversation.” (Gill’s Exposition of the Entire Bible)

Ultimately women, we will one day answer to God for how we treat our husbands for when we reverence and fear our husbands, we are showing reverence and fear towards God. Knowing this, we won’t argue with our husbands because when we are arguing, we are showing disrespect and are usurping our husband’s God-given authority over us. We need to be agreeing with them a lot more than we are disagreeing. If we disagree, we state our opinion once and then let it go. Hammering them over the head with our opinions all of the time is not showing them the respect they deserve.

“Fear—reverential, towards your husbands. Scrupulously pure, as opposed to the noisy, ambitious character of worldly women.” (Jamieson-Fausset)

Women of the world today are incredibly noisy. They want to be known, their voices heard, and their wants fulfilled. They march for godless principles, watch ungodly shows, and speak filth. This is opposite of what the Lord wants from us. We are to be known for having meek and quiet spirits. We rest in the Lord’s will and are at peace, not fighting for what we want but living out godly values instead. We trust the Lord to handle things so our faith becomes strong and we pray continually.

“That she entertain a high esteem for him, be desirous of pleasing him in all things lawful, reasonable, and proper, and fear to give him unnecessarily any just offence in anything, persuaded that it is the will of God, and the law of the relation in which she stands to him, that she should thus conduct herself toward him.” (Benson)

Godly wives only seek the best for their husbands and dwell on the good in them. Their hearts are set on pleasing them and making their lives better. They are careful with their own lives and words so they don’t do or say anything that will embarrass them. A wife is her husband’s glory (1 Corinthians 11:7) so her behavior reflects good or badly upon her husband.

“Fear, in the sense of reverence, spontaneous, obedient regard; cf.the frequent application of the verb to the fear of God.” (Expositor’s Greek Testament)

Just as we trained our children to cheerfully and immediately obey us when they are young, a wife who cheerfully obeys her husband when he asks her to do something brings joy to him just as Sarah obeyed Abraham: Even as Sara obeyed Abraham, calling him lord: whose daughters ye are, as long as ye do well, and are not afraid with any amazement (1 Peter 3:6).

8 thoughts on “Wives Are Commanded to Fear Their Husbands”