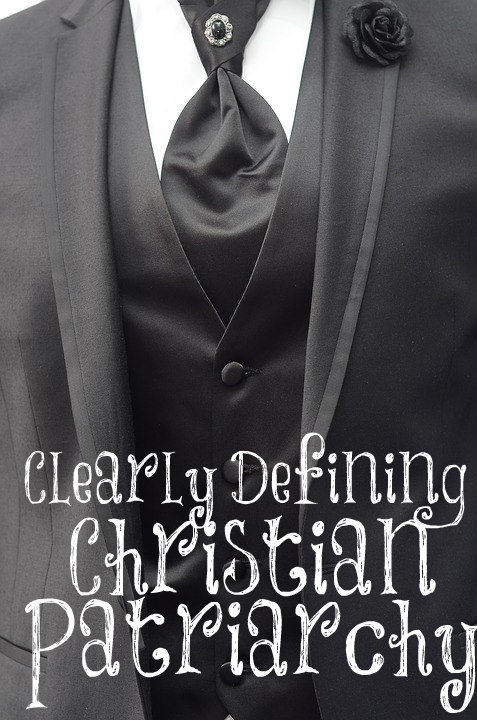 I got a bunch of requests to respond to the following list called “The Tenets of Christian Patriarchy.” I did but my brain hurts. This is a special type of stupid.
Anyways, here you go… 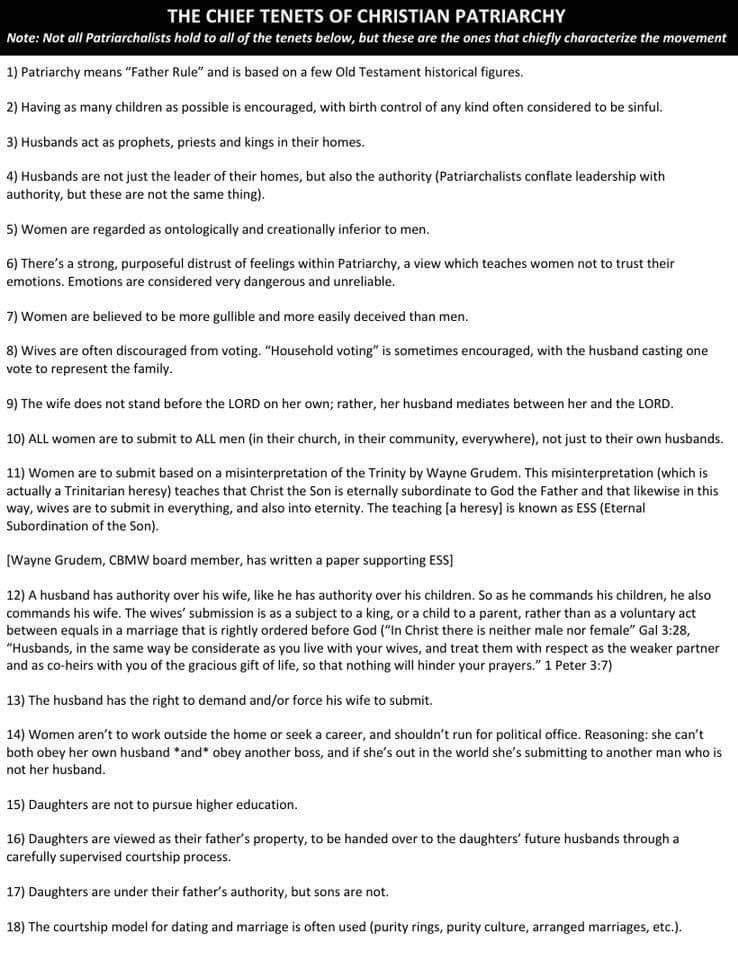 1. Patriarchy means “father rule” and is rooted in the nature of God’s created order. It means that men are the head of the home, church, and society. We see this reflected in the federal headship of Adam, patriarchal nature of the covenantal promises, the fifth commandment, and many other places in many other ways.

2. One of the purposes of a marriage is “the increase of mankind with legitimate issue” (WCF 24.2). Thus, children are to be seen and received as a blessing from the Lord. There is a good bit of disagreement among Christian patriarchalists on when, why, and if a married couple should limit their fruitfulness.

3. All are believers, male and female, belong to a “royal priesthood” (1 Peter 2:9) and live out that reality in light of their God-given station.

4. Husbands are the head of their household. The head of household’s authority is delegated to them by God and must be exercised according to His ways and purposes. Thus, it is a limited authority.

5. Men and women equally bear the image of God but are to live according to their distinctive God-ordained sexualities.

6. Emotions are gifts from God and, like all things, should be expressed in a way that honors His design.

7. It was not Adam who was deceived, but the woman. Some believe that women are more easily deceived (see Patrick Fairbairn, Commentary on the Pastoral Epistles) but not all are agreed on this point. But I don’t know many guys into horoscopes or essential oils. Just saying. [I absolutely agree that women can be more easily deceived. This is one of the two reasons given why women are not to teach nor be in authority over men in 1 Timothy 2:12-14.]

8. The qualifications to vote among Christian patriarchalists differ quite a bit. Some do head of household voting but even then many would allow a widow (i.e. a woman) to vote if she was the head of her household.

9. There is no mediator between mankind (male and female) and God besides Christ Jesus.

10. Men and women are to defer to one another in a way that acknowledges their God-given sex and station. That being said, the marriage-relationship is unique and doesn’t extend to the whole mankind’s relationships.

11. There is not a universal position regarding Eternal Subordination of the Son (ESS) held by Christian patriarchalists. Personally, I reject ESS. (“ESS is for Eternal Subordination of the Son. It’s a doctrinal position that states that God the Son was eternally subordinated to God the Father – essentially that they have always had a hierarchy of authority within the Godhead. This is in contrast to the idea that Jesus only took on a subordinate role when He became incarnated as a man in order to become the sacrifice for sin.” – Lindsay Harold)

12. Man is the head of the household and his wife is helpmate. She is equal in that she equally bears the image of God. There is a hierarchal structure to the household. In this sense, she is inferior. However, men, like William Gouge, still saw the wife as a near equal in terms of authority.

13. An authority can and should require submission to biblically just actions to anyone God has placed under their leadership. All authorities should exercise their office with wisdom and skill. A husband should not attempt to physically force his wife to submit.

14. “Working outside the home” is a post-industrial construct pregnant with feminist presuppositions. Men and women both should labor to be productivity and the center of that productivity is normatively within the home for wives (see Titus 2).

15. All covenant children must receive a Christian education. The form of that education is not mandated by Scripture. That being said, the work of keeping and building a home requires that a woman be wise and capable. A good education is recommended.

16. All children are the responsibility of a father and he, assuming he knows Christ, would lay his life down for them in way distinct from all of “belongings.”

17. Both sons and daughters are to honor and obey both their father and mother.

18. Some patriarchalists are pro-courtship but not all. I, for one, think it’s biblical roots are questionable and are insanely unrealistic in post-Christian culture. I dated my wife, no purity ring. We kept it in our pants and then got married.

P.S. This whole list is stupid. And if you think it reflects patriarchy… well, you are at the very least naive and unread.
Read William Gouge, Stephen B. Clark, William K Mouser, and stop listening to some crazed screenshot drama queen (Christine Blackerby Pack from Sola Sisters).