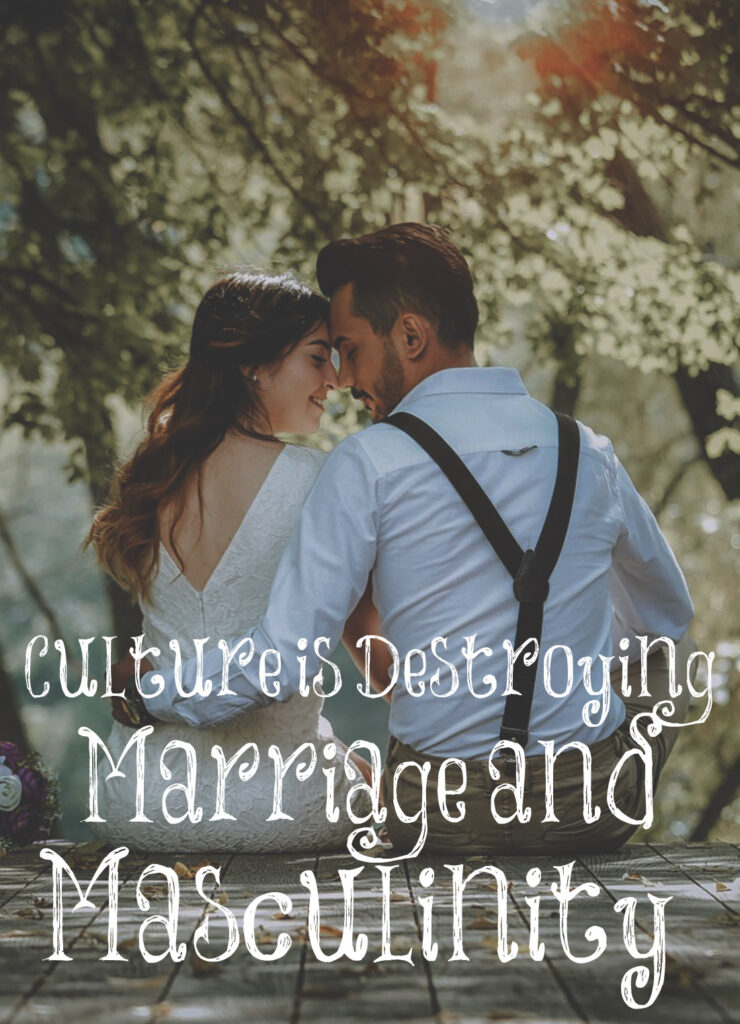 Two articles recently caught my eye. One was titled The Married Will Soon Be the Minority and the second one Traditional Masculinity Officially Labeled Harmful by the American Psychological Association. This past summer, I wrote a few posts about the harm of psychology. This article should seal the deal for all of you.

God never intended any of this for His children. Fornication is a sin against one’s own body. I listened to a fantastic sermon by Costi Hinn recently on sexual purity. He taught that young people need to be taught to be sexually pure in order to please God. Pleasing the Lord should be our aim in life. His ways are for OUR good! Just as children who have been deeply loved and diligently disciplined by their parents grow up wanting to please their parents, those same children who have been also taught the depths of the riches of the Lord will grow up to want to please the Lord.

Our culture is trying to idolize singleness, and the Church isn’t doing much better. Singleness is an affliction for those who desire marriage, who love the Lord, and who burn. God created marriage and called it good. He said that it was not good for man to be alone, so God created a help meet for him. Marriage is God’s design for humanity. Stable nations have stable families. When the family falls apart, so does the nation, as we are witnessing in our nation.

Not only has our wicked culture tried to water down the definition of marriage and even do away with it, they have also tried to get rid of Patriarchy and masculinity. From the above mentioned article: “‘Traditional masculinity ideology has been shown to limit males’ psychological development, constrain their behavior, result in gender role strain and gender role conflict and negatively influence mental health and physical health,’ according to the 36-page report, featured in January’s issue of Monitor on Psychology…The APA also invoked a series of of sobering statistics to emphasize that ‘traditional masculinity — marked by stoicism, competitiveness, dominance and aggression — is, on the whole, harmful.'”

They essentially want men to be women! Feminism’s goal was for women to become men. It’s all so messed up! We wouldn’t have had this once great nation without masculine men. They were created by God Almighty to be the providers, protectors, and builders of societies. Solid intact families who love the Lord and His ways are the ones who must be raising up godly, feminine women who love God’s roles for them, and godly, masculine men who also love God’s roles for them. This is what we need! We don’t need less marriage and less masculinity. We need more solid, biblical marriages and more godly masculinity. These were created by God, but, of course, a wicked culture wants to get rid of them.

Strengthen your marriage, women, by becoming the wife that God has called you to be. Show the world how marriage is done! Let your man be a man. Don’t try to make him into your girlfriend. Men are wired differently for a reason, and it’s good. Let him lead and guide your family as God has commanded him to do. God’s ways are perfect. Trust Him.

And he answered and said unto them, Have ye not read, that he which made them at the beginning made them male and female, And said, For this cause shall a man leave father and mother, and shall cleave to his wife: and they twain shall be one flesh? Wherefore they are no more twain, but one flesh. What therefore God hath joined together, let not man put asunder.
Matthew 19:4-6