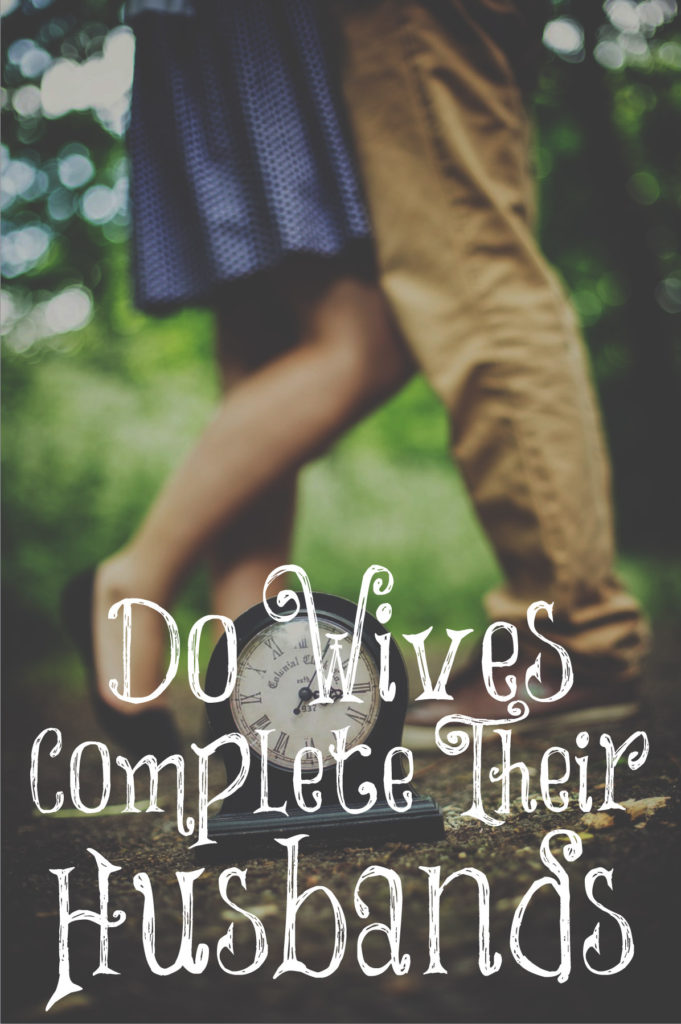 Many Christians who love God and His Word believe that complementarism is a good way to define marriage compared to egalitarianism where men and women are “equal.” I don’t agree. I don’t like the term complementarism, and I don’t believe its biblical.

The definition of complement: “Something that completes or makes perfect; either of two parts or things needed to complete the whole; counterparts.” Was Eve created to complete Adam? Do wives complete their husbands? No, or this would mean that the great Apostle Paul wasn’t complete, because he never married.

Marriage is an example of Christ and His Church. Does the Church complete Christ? No. Christ didn’t need the Church for anything. He chose the Church, His bride, and even gave His life for the Church, but the Church in no way completes Him. He is complete in Himself.

Patriarchy is a much better word to describe Christ and His Church and marriage. Christ is in authority over the Church. He is head over the Church, and the Church is to willingly submit to and obey Christ, just as wives are to their husbands. God is a Patriarchal God. He designated men to be in charge. They are to be the leaders in the churches and in their homes. I believe they are to be the leaders everywhere since this is how it was in God’s Word, except for Deborah which was because Israel was in rebellion.

How does complementarians view Patriarchy? “Nowadays, people regard Patriarchy as the oppressive rule of men. ‘Patriarchy’ is regarded as a misogynistic system in which women are put down and squelched. That’s why we rejected the term patriarchalism.'” This was written by Mary Kassian who helped invent the word complementarianism. In other words, they catered to feminism’s definition of Patriarchy instead of God’s. Guess what? Feminists regard the word “submission” in the same way, so are they going to have to eventually get rid of this word too?

Many, like Mary Kassian, don’t like the word “Patriarchy” or “authority/submission” because they believe that abuse always happens under these. No, abuse happens because of evil men. Patriarchy and authority/submission are God’s recipe for order. It has nothing to do with value, but everything to do with order and how He created men and women. He created men faster, stronger, and bigger. They are the ones called to protect and provide for women. He created women to bear and raise children in their homes where they are protected. They have the emotional nature to do this. This is God’s perfect will, and it’s good.

How do complementarians view authority or headship according to Mary Kassian? “Men have a responsibility to exercise headship in their homes and church family, and Christ revolutionized the definition of what that means. Authority is not the right to rule—-it’s the responsibility to serve.” Does Christ simply serve the Church? No, he leads the church. Yes, Jesus served His disciples by washing their feet, but He spent most of the time with His disciples leading and teaching them.

The definition of authority should read, “Authority is not the right to rule — it’s the responsibility to lead.” But complementarians want to take away all of men’s right to lead or be in authority. To them, it only means that they serve their wives. This is where the term “Servant Leader” comes from. They simply take out the term “leader” and you’re left with “servant.”

When female preachers talk about submission as the “subjugation” of women, they don’t know God’s Word, and they are false teachers. Subjugation is something forced upon women (like in “The Handmaiden’s Tale”), and this word isn’t in the Bible. Submission is what a wife willingly chooses in obedience to God.

SUBJUGATION: The act of subduing and bringing under the power or absolute control of another.

SUBMIS’SION:  The act of submitting; the act of yielding to power or authority; surrender of the person and power to the control or government of another.

Let’s go back to God’s Word and not try to water it down to make it more palatable to the masses. His Word will never be palatable to the masses. Only those who love Him and His will will find it to be good just as it is written. The teaching that wives or husbands “complete” each other has caused a LOT of turmoil in marriage. We look to Christ to complete us, not our spouse because they never can. Christ is the only one who can fully satisfy and complete us.

According as his divine power hath given unto us all things that pertain unto life and godliness, through the knowledge of him that hath called us to glory and virtue.
2 Peter 1:3

One thought on “Do Wives Complete Their Husbands?”