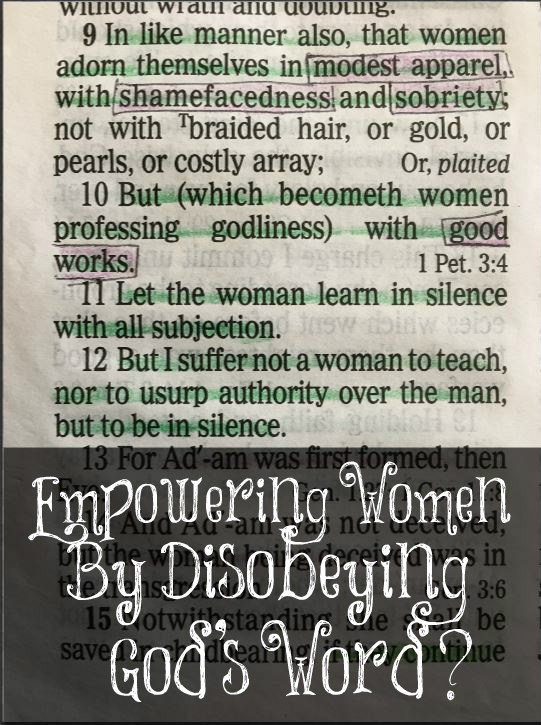 There is a new president of the Southern Baptist Convention. Sadly, he supports female preachers. “The reality is that complementarianism is in the process of being redefined. J.D. Greear teaches that women can preach even in the church. He will likely be elected the next President of the SBC and has already called for ‘a new era’ of complementarianism,” wrote Pastor Tom Buck. The thinking behind this is that women need to be “empowered.”

How is breaking God’s commands empowering women? Empower means “to give legal or moral power or authority to.” God doesn’t empower women to have authority over men or teach them so why should anyone who claims to be a believer in Jesus Christ? God is clear in His Word that women are to be silent in the churches, that it is a shame for them to speak in the churches, and they are not to have authority over men nor teach them.

All this empowering of women is doing is weakening the churches and causing them to become lukewarm. We can’t live in direct disobedience to the Lord and expect anything good to come out of it! I don’t understand how women who study the Word of God can think that their preaching to men is okay. I have heard the argument that if the male leadership of a church thinks it’s okay, then it’s okay. God is our final authority, not the leaders of the churches.

I have a great desire to obey the Word of God as closely as possible. I seek to be as pure and holy as I can and please the Lord in everything. I don’t want to do anything that is against the clear teachings of God or live a compromising Christian life. Yes, I fail at times, but my desire is to obey God in everything. I don’t need to be “empowered” by teaching in the churches. I only want to be empowered by His Holy Spirit for the ministry that He has clearly given to me, namely teaching younger women biblical womanhood. I will not learn from anyone who has no problems disobeying God by teaching men and watering down God’s Word to mean something that it does not. I prefer to learn the Bible from men since God ordained them to be the elders of the churches and teach the Word.

So then because thou art lukewarm, and neither cold nor hot, I will spew thee out of my mouth.
Revelation 3:16