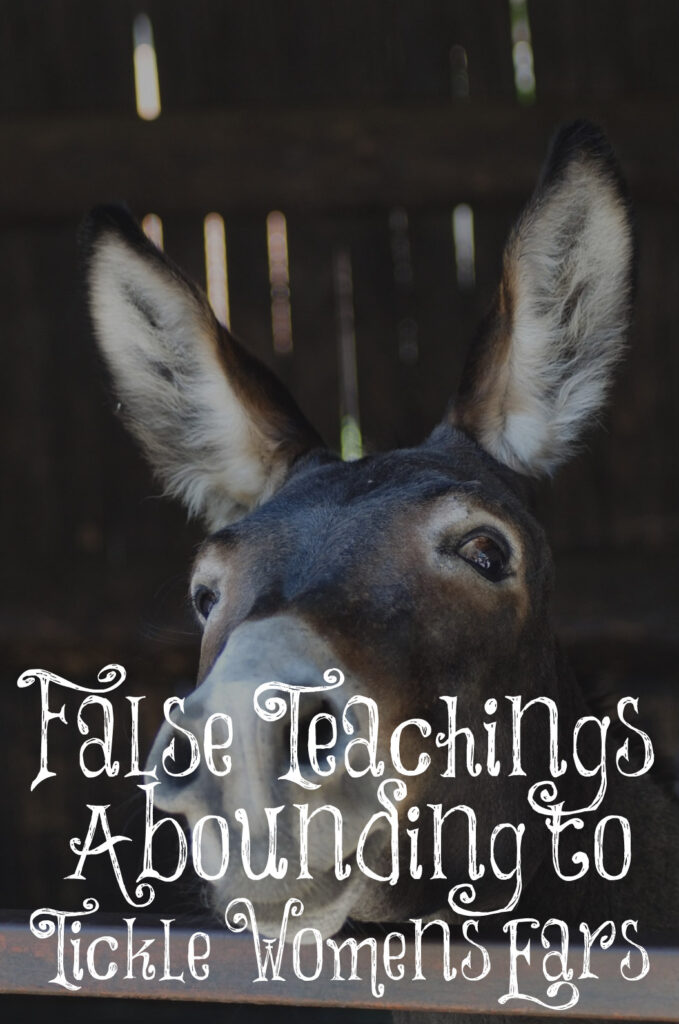 He was raised in a home with an abusive father. Now, his ministry is to stop abuse from happening which is honorable BUT in doing so, he has watered down the meaning of submission to mean honor. God would have used the word honor instead of submission if he only meant honor. He does command wives to reverence their husbands in Ephesians 5:33, but He also commands them to submit to and obey their husbands multiple times. This man came to my Facebook page last week and wrote the following comment in quotes which my husband responded. There are far too many who want to nullify the clear teachings of Scripture based upon their experience like this man did.

Last week, a man came onto my wife’s TTW’s Facebook page with some good things to say about the relationship between a Christian husband and wife, yet in his desire to clarify submission, he essentially destroyed it’s meaning. The following shows his comments (in quotes) and my responses:

“Biblical submission is not under or as if under a spouse from a subservient position.”

Very True! Never has this page taught submission as subservience but rather a willful desire on the part of a wife to follow her husband with love and respect.

“But rather, biblical submission in marriage means to honor—through behavior that reverences their Savior: ‘Submit to one another out of reverence for Christ’ (Ephesians 5:21).”

No, submission does not mean to honor. There are perfectly good Greek words God could have chosen if he wanted to say honor but instead He chose the word “submission” which means to place oneself under the leadership of another.

“Neither the wife or the husband submits their agency or identity in Christ to the other. That’s idolatry not submission. She, a wife, does not lose her Christ identity and authority through submission but rather because of her identity, which is independent of marriage, she, and he, are compelled to honor God’s plan for marital behavior.”

Excellent! Each spouse is indeed to find their New Life and true identity in Christ as such both “are compelled to honor God’s plan for marital behavior.”

“As Ephesians 5:21 tells us, the husband is also commanded to submit to his wife through behavior that reverences Christ.”

This is such an obvious fallacy pushed upon the modern church that “mutual submission” is somehow to exist in a marriage, yet that same passage is never applied to children and parents, servants and bosses, or elders and the Church. Are elders not to rule over the Church as commanded by God, and are we not to obey them? Do you realize that the poor Colossians never got the memo as they are told “Wives, submit to your husbands, as is fitting in the Lord” (Colossians 3:18) with never a mention of “submit to one another.”

“What evidences a husband is submitted to his wife through behavior that reverences Christ? The Bible tells us: ‘Husbands, love your wives, just as Christ loved the church and gave himself up for her to make her holy, cleansing her by the washing with water through the word, and to present her to himself as a radiant church, without stain or wrinkle or any other blemish, but holy and blameless. In this same way, husbands ought to love their wives as their own bodies. He who loves his wife loves himself’ (Ephesians 5:25-28).”

There is zero need for a husband to be submissive to his wife in order to have behavior that reverences Christ. All of us as believers should live lives of love and do all things like Christ in our relationships, particularly in our marriages, but this has nothing to do with forcing the false idea of mutual submission in marriage. A husband’s love for his wife is much as he loves his own body and to live sacrificially towards her is God’s command to husbands but not submission. Actually, this kind of love that God requires is far greater than submission, in that a husband is to lay down his life for his wife in a way that brings her sanctification.

There are many times in a marriage where a husband must lead and make tough decisions for the family, ideally not without consulting his wife and trying to defer to her thoughts and desires, but he is not to submit to her will, but instead to make the right decision for his marriage and family. Christian leadership does not try to have its own way, but often goes along with what wife and family desire, but the very nature of the leadership God has given a husband is to move forward into what he believes God desires even when wife and family prefer another path. Mutual submission is just another was of saying that a husband is not to be head of his wife, even as God has made him head and the one to whom she is to submit with reverence.

“Mutual, not subservient or one directional submission, is God’s plan for marriage, and Ephesians 5:21-33 spells out what mutually submitted behavior looks like in a marriage for the husband and the wife. There is no mention of subservience, disempowerment or ownership in the marriage covenant (Ephesians 5:21-33). Submission does not make either spouse subservient or beneath.”

You got this part right again yet why create the straw man of subservience? No one on this site, and few in the Church itself would ever say that a wife is to be subservient to a husband. Rather we use the word God uses submission or subjection. No wife should be beneath her husband, but instead a good and loving helper just as God designed her role from the Garden. There should be no such thing as mutual submission in a Christian marriage. Someone in God’s structures always has the final say and leadership. The clarity by which God ruled in Israel, and now Christ his Church is unambiguous: Christ, Elders, Husbands, Wives, Children, Masters, Servants and yes, all should be living authentic Christian lives filled with the fruit of the Spirit as they lead or follow, depending on where they are in God’s organization plan.

“Likewise, a biblical head is the servant (Mark 9:35), not ruler over but a ruler under those they serve. A husband’s headship in marriage is purposed to serves his wife as Christ serves the Church.”

True again! But why muddy the waters concerning submission by pointing to the husband’s role of leadership? When do you get to the point where you actually tell Christian wives that God desires and requires that they submit to their husband and respect him as the leader of their home and family? Is all this defensiveness simply a false flag intended to keep you from never saying what the scriptures actually say to wives?

Do you realize that the same passage where you try to create mutual submission closes with a command only to wives: “Now as the church submits to Christ, so also wives should submit to their husbands in everything” (Ephesians 5:24). What about everything is unclear?

For that matter, God makes this even more abundantly clear when he tells wives “Likewise wives, be subject to the own husbands so that, even if any are disobedient to the word, they will be won over without word by the conduct of the wives” (1 Peter 3:1). Can you see mutual submission in this passage or rather a requirement to submit even when a husband is not doing his part of loving and leading like Christ?

“A husband and wife are joint heirs of the grace of life, they are not in slave (wife)/master (husband) relationship: ‘Husbands do likewise, dwelling with them according to knowledge, as with a weaker vessel, with the female, rendering honor as joint-heirs also of the grace of life, so as for your prayers not to be hindered’ (1 Peter 3:7).”

True again, and I love these verses as teach them to the men I mentor… but you are now just trying to create a smoke screen because you don’t want to believe God at His Word. Are we trying to tickle the ears of those who want to take scissors to the Bible and cut out the verses they don’t like? What other verses are being cut out or watered down to fit the modern-day feminist agenda that has infiltrated the Church? When do you tell wives that they are to be submissive to their husbands?

“A husband and wife have equal responsibility for behavior that reverences their Savior.”

No, husbands have the greater responsibility to model Christlike behavior and love for their wife and family. God always holds the leaders more accountable, but this does not mean that the followers are not also accountable to follow and obey in everything that is not sinful.

“When submission is defined from a toxic patriarchal perspective, attitude or mindset, submission gets falsely associated with a woman’s role as opposed to behavior of a husband and wife that reverences or shows a deep and profound respect for Christ.”

Is it not ironic that you are the one defining a toxic patriarchal perspective that does not exist on this site or in most of the Church. Yes, both husband and wife are to reverence Christ in their behaviors by doing all things Christian in their home, but this does not nullify the husband’s specific responsibilities as head and lover of his wife, nor a wife’s responsibility to be a helper and lover to her husband as a submissive, respectful wife.

“We have to be careful to define and defend what submission means in marriage according to Ephesians 5:21, not toxic patriarchy, for both the husband and wife, so that neither the husband or the wife confuse submission with anything other than behavior, reciprocated, that reverences Christ. And both spouses are equally responsible for——not just the wife.”

Do you realize you have focused much of your argument on one verse that says “submit to one another” while never addressing the other six verses that specifically tell a wife to submit to her husband even “in everything?” What is it about the need to make a defense of one verse yet ignore all the others that are far more unambiguous? It’s a pretext. You and many like you are trying to do everything to avoid actually telling wives that God’s Word says they are to submit to their husband.

We have now a modern Church that has gone along with the flow of culture and now tries to justify that God didn’t really mean what He explicitly states with emphasis in multiple passages of His Word, “Wives submit to your husbands.” Yes, God’s desire is that as each husband loves His wife and that the wife shows her love and respect to him by her submission and godly behavior. But even when he is not perfect or right; even when disobedient to God’s Word, the godly wife is to win him without a Word by her godly submissive behavior (1 Peter 3:1).

This verse completely blows and idea of God’s intention for mutual submission in marriage out of the water. If you really want to help Christian marriages, start defining for wives what submission truly should look like instead of trying to find a scapegoat in a husband’s behavior. Wives love to use there husband’s behavior as their excuse not to obey the Word, yet you have said it clearly when you write: “ “A husband and wife have equal responsibility for behavior that reverences their Savior.” Now start teaching both sides of this important issue as our future Church and families depend upon it.

For the time will come when they will not endure sound doctrine; but after their own lusts shall they heap to themselves teachers, having itching ears.
2 Timothy 4:3