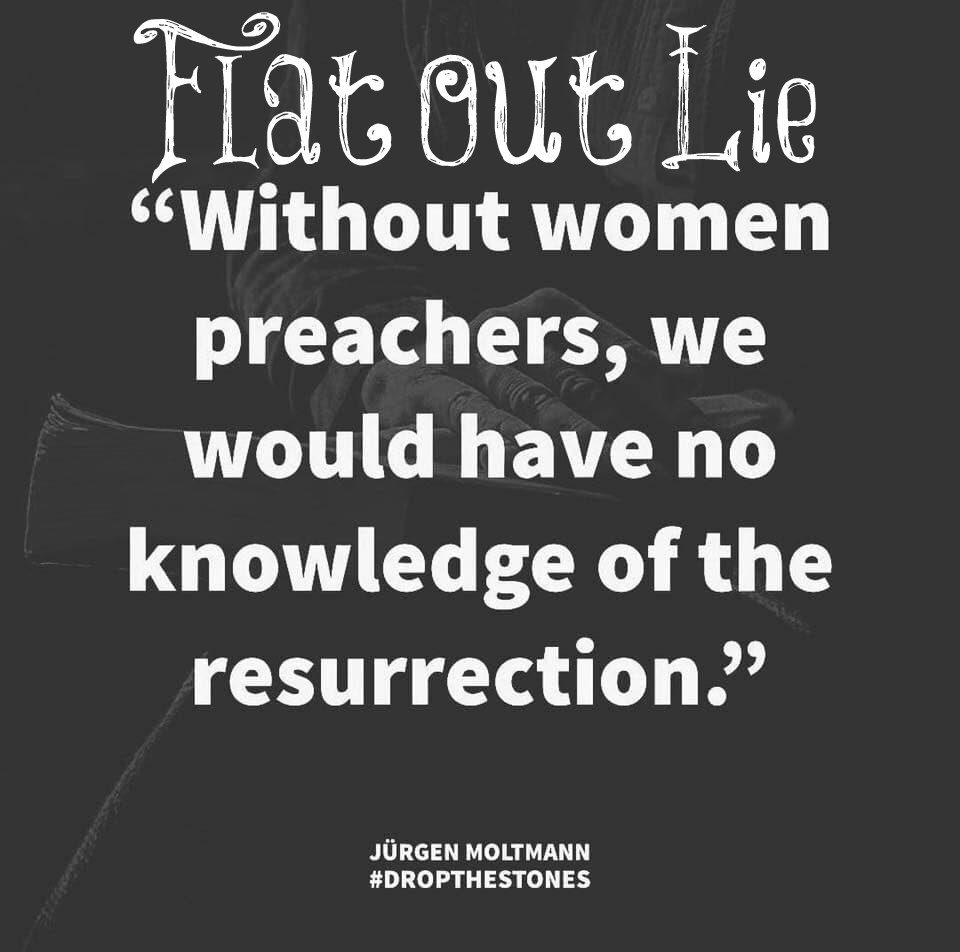 This meme was posted on Facebook and it’s a flat out lie yet many women believe it to be so! They wouldn’t be listening to all of the female preachers if they believed it to be a lie. Every single female preacher that I have heard try to justify why she can preach and teach the Word of God uses this excuse, “It was women who went and preached to the disciples that Jesus had risen from the dead!” The Church had not even been established at this point and Paul had not written the instructions to the Church yet, so there were no elders/pastors at this time in history and relaying information isn’t preaching.

The wise women in the chat room had their opinions about this meme, too. They accept the Word of God as perfect and don’t try to twist and water it down in any way.

Sarah: “Just because I share my testimony with a friend doesn’t mean I’m a preacher. Mary was just telling her friends what happened. If something that wild happened to me I’d definitely tell my friends, too. And regardless, we would still have knowledge of the resurrection because God wanted us to know. Jesus still appeared to many people after all this. She could have said nothing and they still would have known.”

Guisel: “My response or lack thereof depends. If it’s a man, I keep scrolling because I can’t be a hypocrite and teach him that he is incorrect. If it is a women, I’ll generally say, ‘That’s inconsistent with scripture’ and insert the scripture(s) that disprove whatever absurdity is being pushed.

“Sadly, many ‘mature’ Christians are falling for the many traps that Satan is laying. It’s why it is critical to put on the armor of God every single day and not let our guards down so we are not deceived. The never ending deluge of false theology shared on social media is one of the many reasons why I wanted to quit. We’re being fed this rotten fruit so much that we start to confuse it with truth.”

Michaela: “People would have most certainly known. His ascension is 40 days after His resurrection. Lots of people saw Him. Mary just happened to be the first. It doesn’t make her a preacher.”

Lindsay: “Women, like all believers, are to speak truth and tell others the message of the gospel. But they are not to hold church authority over men by preaching or teaching in the church gathering or holding any position of church authority over men. Why is this distinction so difficult for people to grasp? I think it’s because they don’t want to make the distinction so that they can dismiss what the word of God says.”

Let your women keep silence in the churches: for it is not permitted unto them to speak; but they are commanded to be under obedience as also saith the law. And if they will learn any thing, let them ask their husbands at home: for it is a shame for women to speak in the church.
1 Corinthians 14:34, 35