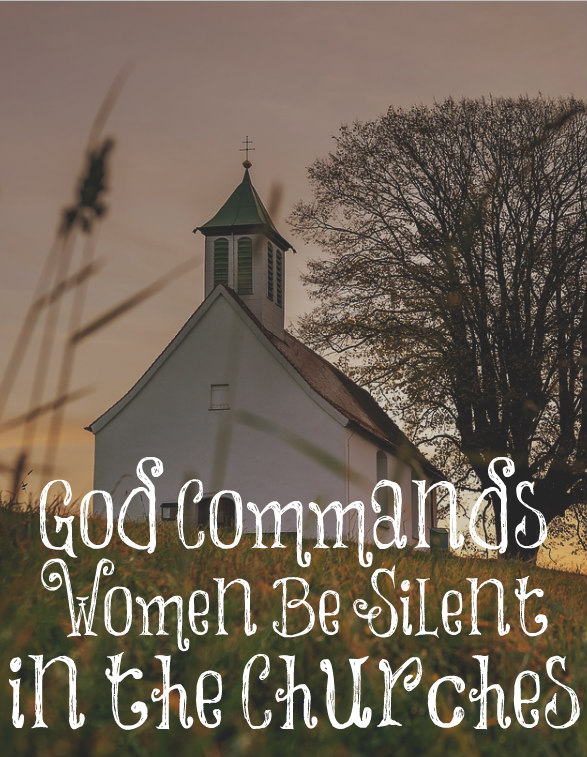 “For God is not the author of confusion, but of peace, as in all churches of the saints.

“Let your women keep silence in the churches: for it is not permitted unto them to speak; but they are commanded to be under obedience as also saith the law.

“And if they will learn any thing, let them ask their husbands at home: for it is a shame for women to speak in the church.

“What? came the word of God out from you? or came it unto you only?

“If any man think himself to be a prophet, or spiritual, let him acknowledge that the things that I write unto you are the commandments of the Lord” (1 Corinthians 14:33-37)

“Let the woman learn in silence with all subjection.

“But I suffer not a woman to teach, nor to usurp authority over the man, but to be in silence.

“For Adam was first formed, then Eve.

“And Adam was not deceived, but the woman being deceived was in the transgression” (1 Timothy 2:11-14)

In these verses, women are once again reminded to be in silence in the churches. We are also told that women are not to teach nor usurp authority over men in the churches. Then we are the reasons why. Adam was created first, therefore, this was God’s authority structure from the beginning (Patriarchy), and Eve was deceived.

These verses are as clear as day for all who want to hear. Many don’t want to hear, and this is why there are so many female preachers/teachers in the churches and no one seems to care. Women are breaking God’s clear commands and “preaching” His Word in the churches. They are in sin. Do not be deceived by them and if you have a female on the elder or deacon board, I encourage you to find a new church.

When I was growing up, no women spoke in the churches that I attended. There weren’t female worship leaders who gave little mini-sermons and prayed in between the songs, essentially being in authority over the men. There weren’t even women giving announcements. It was all done by the men, and no one thought anything of it since most churches were this way.

We must live according to God’s principles no matter how out of date that they appear to be. They are good and perfect for us, women. Trust that His ways are best and obey Him. Find a church that obeys His Word without compromise.

For we are not as many, which corrupt the word of God: but as of sincerity, but as of God, in the sight of God speak we in Christ.
2 Corinthians 2:17

32 thoughts on “God Commands Women Be Silent in the Churches”