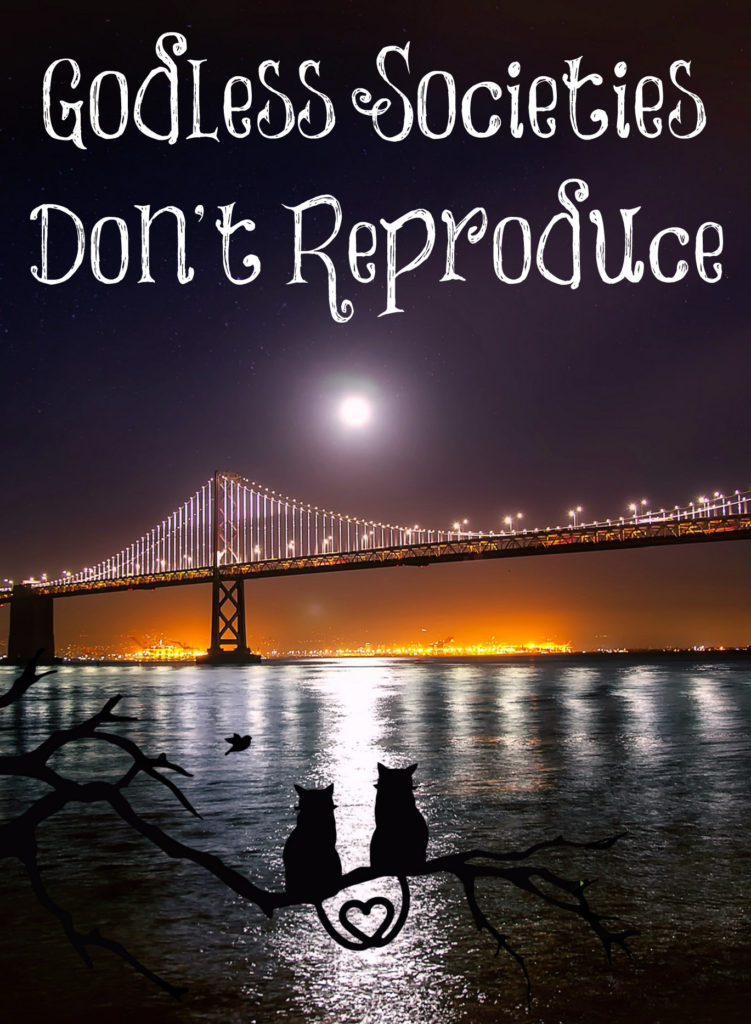 God commands young women to “marry, bear children, guide the house, give none occasion to the adversary to speak reproachfully” (1 Timothy 5:14) therefore, if you are a young woman who loves the Lord, you should be obeying this command to the best of your ability. Too many Christians have been swayed by the culture they are living in instead of reading and obeying the Word of God. This world needs children and no, it is NOT overpopulated as the left wants you to believe. They have left out God so they believe they know better than Him but they don’t. “Godless societies don’t reproduce. The death of God is the death of reproduction.” (Dennis Prager)

The New York Times has an article titled Where Have All the Children Gone? “The share of children in San Francisco fell to 13 percent, low compared with another expensive city New York, with 21 percent. In Chicago, 23 percent of the population is under 18 years old which is the overall average across the United States.” California has the lowest birth rate since the Great Depression. San Francisco has as many dogs as children, the article states, but I bet it has more dogs than children since people value pets more than they value people. In 1970s, a quarter of the people in San Francisco were children. The city is doing what it can to bring back children but to no avail because godless societies don’t reproduce. They are more into their pleasures than into sacrificially raising children. “Mr. Florida, the expert in urban demographics, said a lack of children made a city ‘a little bit more of a colder or harder place.’..the city seems detached from the life cycle.”

I don’t know about you but I wept when I read this article. (Yes, I weep more in my older age.) Our children have brought so much joy into our lives and if I hadn’t gotten so sick, we would have gladly welcomed more into our family. Now, we are enjoying our precious grandchildren who make us laugh and fill us with joy just as our own children did when they were young. My oldest granddaughter calls me “Mommy” once in a while but the last time she caught herself and said, “Ooppss, I called you Mommy!” I told her it was okay since I am her Mommy, her Grandmommy! I just have a grand in front of it! 🙂

Christian women, you need to begin having children and raising them in the wisdom and the knowledge of the Lord. You saw the depravity of the so called Women’s March and it’s the product of children being raised by a godless government run school system that has taken God completely out of the schools and replaced it with securalism. They worship the creature instead of the Creator and it has caused havoc. Take your children out and you be the one to train them in the ways of righteousness. The Lord has given you this job, not an unrighteous institution. Have children, lots of them and enjoy them. Love your time at home. Sure, there will be difficult days. I raised four children while being sick as a dog but God gave me strength all along the way and now I am blessed with four great children who married precious spouses and are having children.

There is nothing in life better than loving the Lord and living for Him by obeying what He has commanded us to do. His ways are perfect for us because He is our wonderful Creator. If you think you don’t have enough money to have more children, the Lord owns everything and He is our provider. If you have a hard-working husband, the Lord will provide for you. All He asks of us is that we step out in faith, obey what He has told us to do, and He will provide and give strength to accomplish His perfect will. If godless societies don’t reproduce, godly people cheerfully reproduce if they are able because God’s command to be fruitful and multiply has never been rescinded!

Behold, children are a gift of the Lord,
The fruit of the womb is a reward.
Like arrows in the hand of a warrior,
So are the children of one’s youth.
How blessed is the man whose quiver is full of them.
Psalm 127:3-5