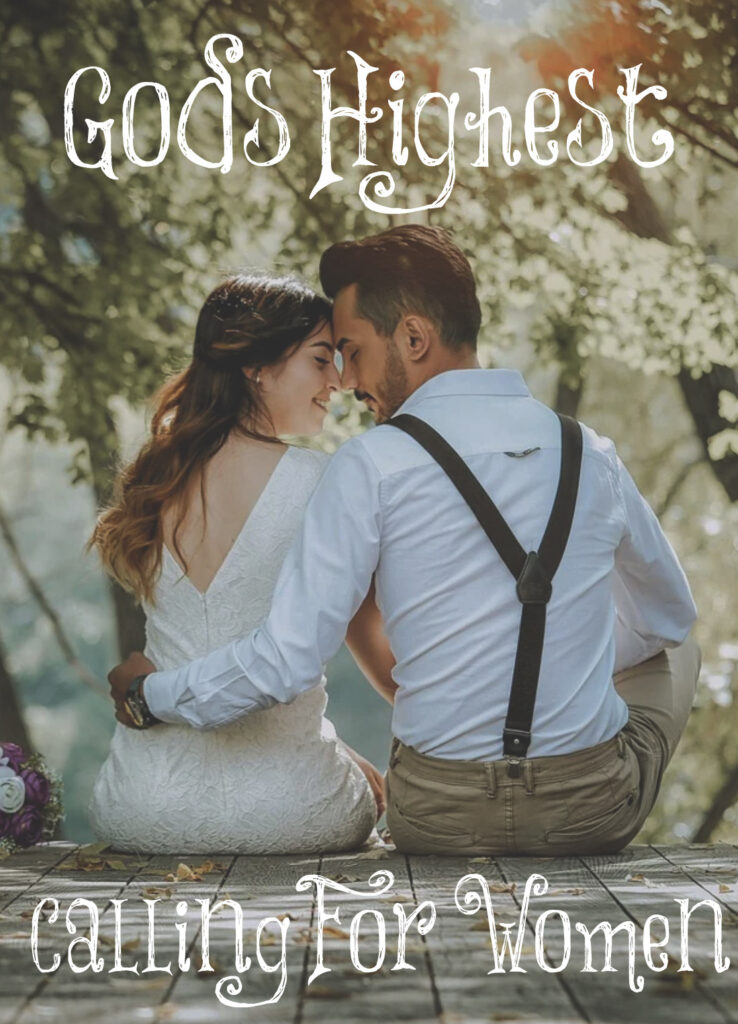 “Marriage and motherhood are not a woman’s highest calling. The NT explicitly tells us in 1 Corinthians 7 that only those who burn with lust need to marry so as to avoid sexual temptation. Getting married is a kind of gift to glorify God and according to Paul, it’s but ONE kind of gift.” (Ariel Gonzalez Bovat on Instagram).

In the beginning, God created Adam. God said it was NOT good for man to be alone, so He created Eve to be his help meet (helper suitable for him). Then God instituted marriage and commanded that they be fruitful and multiply. God has never rescinded this command. This was God’s perfect plan for humanity.

We are told in 1 Timothy 2:15, “Notwithstanding she shall be saved in childbearing, if they continue in faith and charity and holiness with sobriety.” All women who continue in faith will be saved, but childbearing refines godly women and makes them more like Christ. It is the ministry that God has given to women; being help meets to their husbands and raising godly offspring.

Is singleness a gift? No, it is actually an affliction for many who want to be married but are not. Doug Wilson wrote an article titled Seven Reasons Men Should Marry Before Their 23rd Birthday. It’s fantastic! “Men need help, and they need help as soon as they have assumed the full responsibilities of adulthood. Women were given by God to help men because men needed the help, and that help has to do with their vocation and calling. If a woman is called to be the wife of a doctor, she can step into that calling by being the wife of a med student. God does not say ‘it is not good for man to be alone after grad school.'”

Paul wrote about singleness by “permission and not of commandment” (1 Corinthians 7:6). If a man doesn’t burn (which most do) and wants to live a life like Paul (which most single men are not doing), then yes, he has the freedom to do so. Many these days act as if singleness is God’s will for us. That it’s far superior to marriage. This just isn’t true if you take the Bible as a whole and understand God’s original design for us.

Why do you think Satan and feminism have fought so very hard against God’s will for women? Satan doesn’t want women marrying. He doesn’t want them bearing children and raising godly offspring. This thwarts his wicked plan for us as we are seeing in our nation. He wants young women going off to college and working for a career during their most youthful and fertile years. Do you know that college educated women initiate divorce 90 percent of the time? (This is one of many reasons that I will NEVER advocate for women to go to college. It has caused FAR more harm than good.) Divorce has skyrocketed. Broken homes and families are common. This isn’t God’s will for humankind!

What about single and barren women? Here’s a great post I share often to encourage them. We live in a fallen, wicked world where God’s perfect will isn’t happening for many. Feminism has caused a lot of this damage. Many godly, single and barren women grieve over their circumstances, but even in their grief, they need to remember that God is good, and His plan for them is good. They must learn that godliness with contentment is great gain.

Marriage used to be common, so did women having children and being home to raise them. Now, it’s a minority of the population doing this. There are a LOT of singles now. Is this a good thing? NO! Marriage matures us. It teaches us many good and beneficial things. The Apostle Paul even wrote that the elders of the churches must be “the husband of one wife.” If singleness was fantastic, he would have encouraged elders to be single like the Catholics do. I am sure Paul understood why God said that it wasn’t good for man to be alone, and why He created marriage.

Yes, God can use single and barren women in powerful ways, but this doesn’t negate God’s perfect will for women. Doug Wilson ends his article this way: “Feminism is a toxic mess. The best and only complete answer to it is for men to find a woman early, love her completely, feed and educate her children, and bring her as much happiness as you are capable of bringing someone. As one Puritan put it, and man should first choose his love, and then love his choice. Young Christian men should marry in such a way as to make celebration of a 75th anniversary a much greater likelihood.” And women need to be taught by older women to LOVE THEIR HUSBANDS until death do they part.