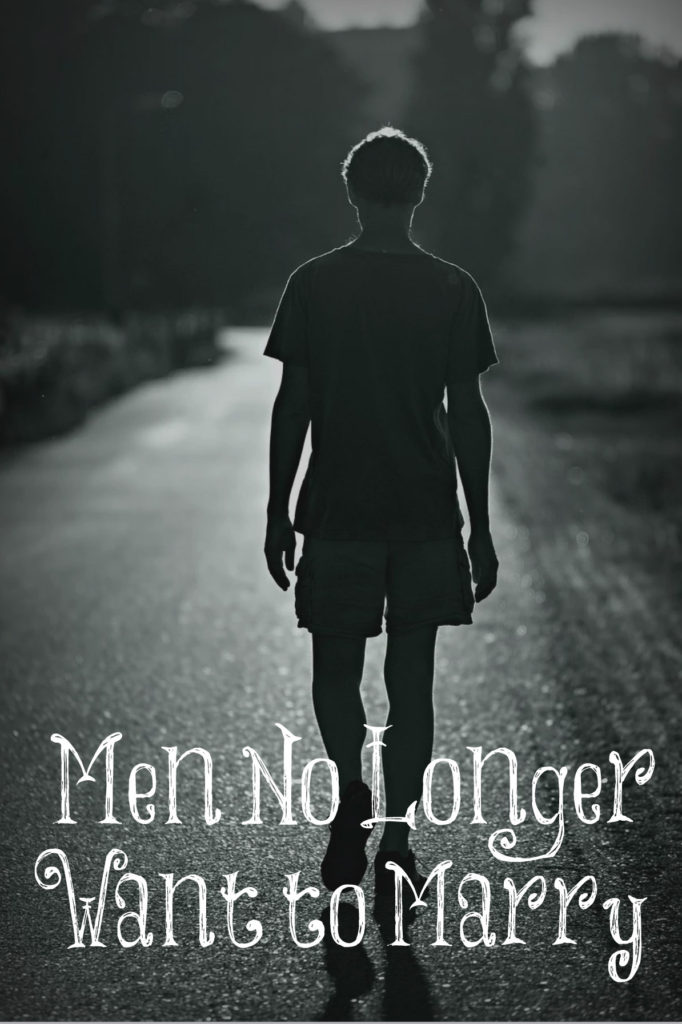 Evie published an article named “Millions of Men No Longer Get Married, and You Can Thank the Government For That.” No, you can thank feminism and its fight for “equal rights” for that. The government just obeyed what women wanted. Feminism is satanic, and the opposite of God’s will for women.

“Marriage is on the decline, and it’s a scary thought. Imagine dating a man for years, cohabitating, and giving the relationship your all without him ever having to ‘put a ring on it.’ No matrimony, no wedding dress, and no big celebration with family and friends. What about the thought of having children without marriage?”

Young women, I hope you can easily spot the problem with this statement. WHY should a man marry a woman who is already fornicating with him and acting like his wife with NO commitment? This is foolishness, women! Don’t give your virginity away until your wedding night. If men weren’t getting sex and having a make-believe wife so easily, they would still be getting married!

“Philip Cohen, a sociology professor at the University of Maryland, says, ‘Women’s independence and gender equality is a huge factor in the long-term decline in marriage.'”

Of course, they are! Feminism’s goal was to convince women that they don’t need men. They need careers and paychecks more than they need a husband and children. They convinced women to store their treasures (careers and paychecks) upon this earth where moth and rust destroy, rather than storing them (husband and children – family) in heaven; those things that last for eternity. Also, men don’t want to marry women that act like men. They want to marry feminine women. These are the women who will make good wives, not feminists who demand their own way.

“There has also been a rise in men’s rights groups such as Men Going Their Own Way (MGTOW) and the Manosphere, where men in droves complain about men’s unfair treatment in relationships and family courts. They’re tired of being brow-beaten by women and the gender bias laws against men. For this reason, millions of men don’t want to get married and are opting out of marriage altogether.”

This is where biblical womanhood comes in, women. If a man who has gone MGTOW meets a godly, young woman who has a kind and submissive spirit, he will most likely change his mind. The problem is that most men aren’t meeting women like this. They are rare indeed. “Who can find a virtuous woman? for her price is far above rubies” (Proverbs 31:10). But if you want to marry, you must learn to have a meek and quiet spirit instead of loud, contentious spirit that wants to dominate and control men. Feminism has produced the opposite of what men are looking for in a wife. Become a wife that a godly man will want to marry.

“Divorce rates are sky-high: 45% of marriages end in divorce, and women initiate 80% of them. Ultimately, men know they could lose a lot, from losing their freedom to being financially exploited to losing custody of their children. It’s common knowledge that the courts favor women over men. They’re renowned for favoring women regarding the division of assets, child support, and alimony even if they aren’t married.”

In women’s fight for their rights, they have destroyed the greatest institution known unto men and created by God Almighty, marriage. All feminists have fought for is themselves. In the process, they have greatly harmed not only themselves, but men and children too. And once the family is destroyed, the nation is destroyed. We can see the consequences of this all around us. The only way this nation has a chance of surviving is if women will turn away from feminism and begin to build up their marriages and homes, as God has commanded that they do.