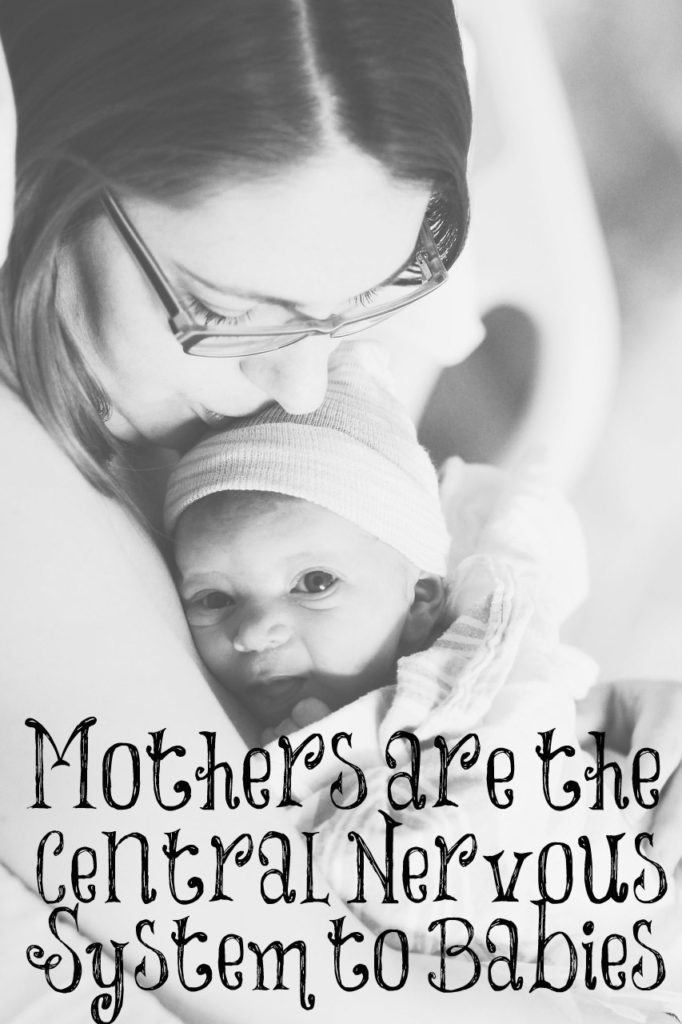 It’s surprising to many when science backs what God has commanded. It’s not to me. Why would it be? He’s our Creator and knows what is best for us. He knows that mothers home full time with their children is best for all involved. Ms. Komisar, a Jewish psychoanalyst and liberal Democrat, discovered the importance of mothers being home with their children and wrote a book about it. James Tarnato wrote about her findings in the article The Politicization of Motherhood.

“The premise of Ms. Komisar’s book—backed by research in psychology, neuroscience and epigenetics—is that ‘mothers are biologically necessary for babies,’ and not only for the obvious reasons of pregnancy and birth. ‘Babies are much more neurologically fragile than we’ve ever understood,’ Ms. Komisar says. She cites the view of one neuroscientist, Nim Tottenham of Columbia University, ‘that babies are born without a central nervous system’ and ‘mothers are the central nervous system to babies,’ especially for the first nine months after birth.”

Isn’t God amazing! He created women with wombs, ovaries, and breasts in order to bear and nourish their babies and now we find that mothers are the central nervous system to their babies! This is His perfect and awesome design. His will is that mothers be the ones to raise their own babies and be there for them continually since they are perfectly created to do this.

“Women produce more oxytocin than men do, which answers the obvious question of why fathers aren’t as well-suited as mothers for this sort of ‘sensitive, empathetic nurturing.’ People ‘want to feel that men and women are fungible,’ observes Ms. Komisar—but they aren’t, at least not when it comes to parental roles. Fathers produce a ‘different nurturing hormone’ known as vasopressin, ‘what we call the protective, aggressive hormone.'”

People have gotten angry with me for suggesting that God wants mothers home with their children full time, not fathers. God is the One who commanded women be keepers at home, not fathers, and now there’s proof to why mothers are better than fathers with their children full time. God created women more emotional and sensitive than fathers for a very good reason. Who are we to question His perfect will?

“As Ms. Komisar ‘started to put the pieces together,’ she found that ‘the absence of mothers in children’s lives on a daily basis was what I saw to be one of the triggers for these mental disorders.’ She began to devour the scientific literature and found that it reinforced her intuition.”

This is exactly what the author of the book Home By Choice found. Those children who are raised by their mothers full time are much more secure and emotionally stable than those children who were not raised by their mothers full time. It makes perfect sense when we understand the mother’s effect on her baby’s central nervous system and the oxytocin that comes from her towards her baby.

“When she was shopping for a literary agent, she tells me, ‘a number of the agents said, ‘No, we couldn’t touch that. That would make women feel guilty.’  Another time she was rejected for a speaking gig at a health conference. She quotes the head of the host institution as telling her: ‘You are going to make women feel badly. How dare you?'”

I was told the same thing many years ago when I wanted to teach about women being keepers at home to a group of women at my church. I was told it would make working women feel guilty, thus I was not supposed to teach them what God had instructed me to teach them. Sadly, few older, Christian women are teaching the younger women to love their children and be keepers at home and the women and children are suffering.

“You can see why tradition-minded conservatives welcome Ms. Komisar so warmly. Think about how they are stereotyped—as backward, superstitious, hostile to science. She shows that science validates what they know as common sense.”

Unfortunately, it’s not common sense anymore, even among Christians, or else so many wouldn’t fight against what I teach. Yes, women are commanded to be keepers at home and raise their own children. Their children desperately need and want their mothers. No one can take the place of a mother in a child’s life. These teachings aren’t backwards and superstitious. They are what is best for the children. Children, the most innocent among us, are suffering so terribly in our country right now.

I don’t agree with Ms. Komisar’s conclusion that the solution to this problem is more government funding for maternity benefits which simply increases the tax burden on everyone, especially upon the men who are the sole providers of their families. Mothers need to stay home with their children as long as their children are under their roofs. Children need their mother’s protection, their care, their guidance, training, and love. No one can replace a mother in a home or in a child’s life.

4 thoughts on “Mothers are the Central Nervous System to Babies”