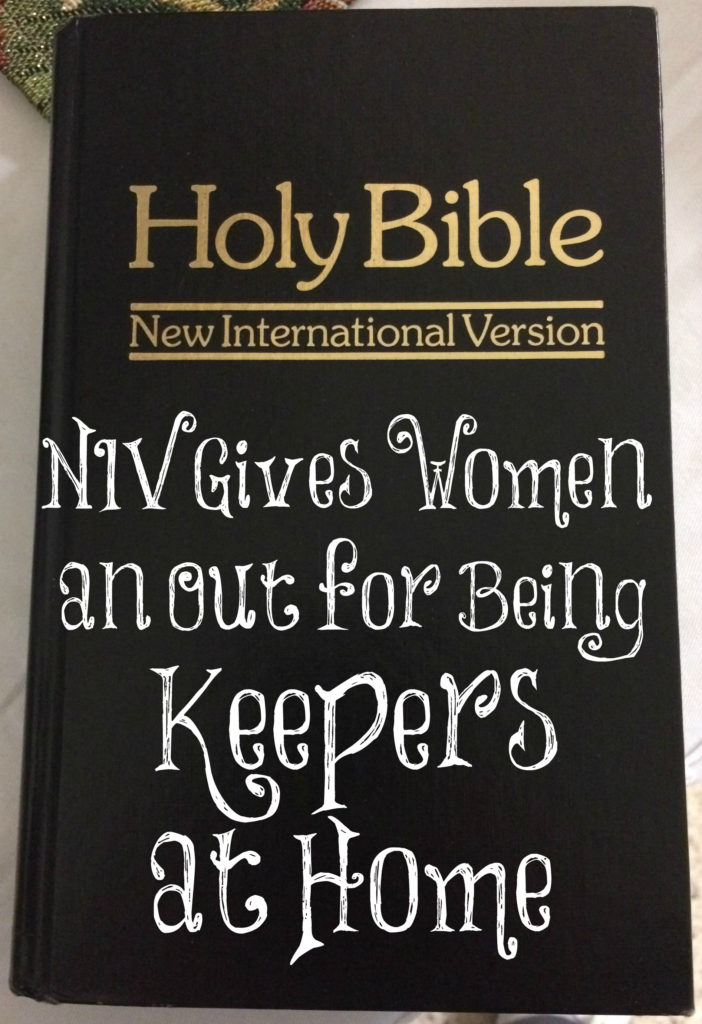 Did you know that the NIV doesn’t use the word “keepers at home” in regards to married women’s role? No, they have redefined it as meaning “busy at home.” William Einwechter wrote an incredible article about the evolving quality that this term originally meant to the way it is used today. Many have mocked me for teaching that married woman should be keepers at home but I trust God knows what He meant when He instructed older women to teach the younger women this principle.

“Nonetheless, in accord with the spirit of our age that looks in disdain upon the notion that the sphere of a married woman’s work is her home, many in the church have rejected the earlier consensus understanding of ‘keepers at home.’ Instead, to be ‘keepers at home; is interpreted to mean that a wife and mother is ‘to be busy at home’ (NIV), i.e., she ‘should not be idle or derelict in fulfilling home duties.’ In other words, ‘keepers at home’ does not define the married woman’s calling or the sphere of her work, but is simply an admonition not to neglect her domestic duties. Therefore, a wife and mother may pursue a career outside of the home — as a lawyer, teacher, sales clerk, etc. — as long as she fulfills her responsibilities in the home.”

Then Mr. Einwechter gives a lesson on the Greek concerning the term “keepers at home” and it becomes very clear what God intended. “The Greek word translated ‘keepers at home’ is oikourous. This word is derived from two Greek words. The first, oikos, means a house, a dwelling, or, by metonymy, a household or family. The second, ouros, refers to a keeper, watcher or guardian, i.e., one who has the oversight and responsibility for something. Thus, the basic significance of oikourous is that of a ‘housekeeper,’ that is, one who watches over a household and family, seeing to it that all members are cared for, and all things maintained in good order. Oikourous is used only in the New Testament in Titus 2:5; therefore, in seeking to accurately discern its meaning we must look to the Greek literature of the New Testament era. There, the word oikourous meant watching or keeping the house. It was employed in reference to a watchdog who guarded a house, but more germane to the context of Titus 2:5, oikourous also meant keeping at home, and was employed as a substantive, ‘housekeeper,’ to indicate the mistress of the house. Furthermore, it was specifically used in praise of a good wife. Interestingly, oikourous is utilized contemptuously of a man who refused to go out to war, designating him a ‘stay-at-home’ man.

The verbal form of the Greek stem oikour-, oikoureo, meant to watch or keep the house. It was used of women to indicate those who were at home to watch over the affairs of a household, and of men to designate those who stayed at home to avoid military service. Other words based on this same Greek stem such as 1) oikourema, meant keeping the house and staying at home, and was used to refer to women as the ‘stay-at-homes’; 2) oikouria, referred to women as those employed in the work of housekeeping; 3) oikourios, meant the wages or rewards for the work of keeping the house, but also designated, significantly, keeping children within the doors of the house, i.e., keeping them at home.

On the basis of this word study, it is concluded that oikourous was primarily used in the positive sense to indicate both the nature and sphere of a married woman’s work. The nature of her work is to manage the affairs of her household, and the sphere of her work is the home. It is important to note that oikourous and its cognates all included the idea of staying at home. Therefore, we believe that the ‘keepers at home’ are those who stay at home for the purpose of managing their households.”

God definitely intended for women to be keepers at home and it means exactly what He said. He doesn’t need to use a lot of words to help us to understand better. He’s perfectly clear. “Thus the roles assigned to the married woman by God confirms that ‘keepers at home’ refers to those who remain at home so that they might properly attend to their duties of caring for their family and managing its everyday affairs. When her duties are understood in all their scope and significance, it becomes clear that only by being ‘keepers at home’ can a wife and mother fulfill her high calling from God to be a helper to her husband, a mother to her children, and a manager of her household.”