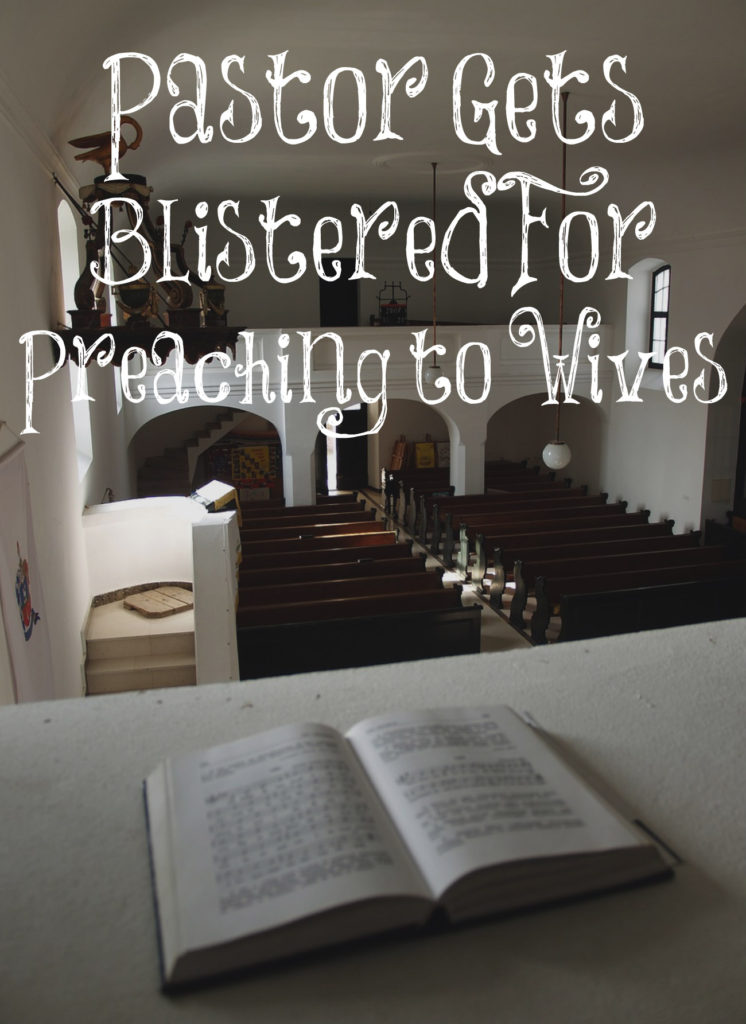 There’s a viral video of a pastor who actually preached to wives. This is SO uncommon. How many of you have ever heard a sermon preached to only wives by a man? So, here’s one who finally does and explains clearly men’s battle and what they would love from their wives, then he gets blistered. Sure, he could have stated some things a bit differently and left out a few things, but over all, he was spot on.

The title under the video is “Malden, MO Pastor tells women they need to stay attractive so men will not stray.” I listened to the entire thing to make sure what I write is true.

Here’s a summary of what he said:

“Wives, be attractive for your husband. Men are visual so dress to please him” which included their clothing, hairstyle, and makeup.

“After marriage, women tend to let themselves go, but the chase isn’t over! Don’t look like a butch. Men want their wives to look like women at home and in public, so don’t let yourself go.”

He did say that one man has a “divorce weight.” He didn’t give his opinion about this, but THIS is wrong! I definitely disagree with this.

His wife used to be heavy but has lost her weight. He quoted her as saying, “Food never tastes as good as skinny feels.”

I was wondering if he would get to the inner person of a woman, and he did. He quoted Proverbs 31:30, “Favour is deceitful, and beauty is vain: but a woman that feareth the Lord, she shall be praised.” He expounded on this a bit.

He then goes to 1 Corinthians 7:4, “The wife hath not power of her own body, but the husband: and likewise also the husband hath not power of his own body, but the wife.” He did joke when he told men to get their Bibles out and read this verse to their wives if their wives were defrauding them. He goes on to say that “men need sexual intimacy. Sex is the main reason he married you! He also has the need to be admired by you.” He never did say that wives need to stay attractive so their husbands won’t stray, that I heard.

He did show a provocative picture of Melania Trump while talking about a “trophy wife” and telling wives that they don’t need to be like this. I wasn’t a fan of this and felt it was inappropriate, but most of what he preached was truth, yet many women were offended by this. They don’t want to be challenged nor told what their husbands would like.

God’s Word is clear about caring for our temple, since the Holy Spirit lives inside of us (1 Corinthians 6:19,20). We are not to be gluttons but only eat our portion and not allow food to master us (1 Corinthians 9:24-27). (Yes, I can see that the pastor is overweight and should take this admonition for himself too, but men are MUCH more visual overall than women, and he’s preaching solely to women.) We are commanded to not deprive our husbands sexually, so nothing he said was necessarily unbiblical but in these “modern” times, this type of sermon is unacceptable to many.

Women, take what you want out of this sermon and learn from him, since many pastors fear teaching this type of a sermon to wives. We should always be learning how to be disciplined and more godly wives. It’s also good to learn to not get offended easily. Life is a whole lot easier then.

I shared this video in the chat room, and here’s how one woman responded to it: “I listened to the sermon and was quite convicted by it! Why would I not want to know what men want in a wife? I seek this information.” She had a lot of “likes” on her comment since many women in the chat room have soft, teachable hearts that are not offended easily.

22 thoughts on “Pastor Gets Blistered For Preaching Sermon to Wives”