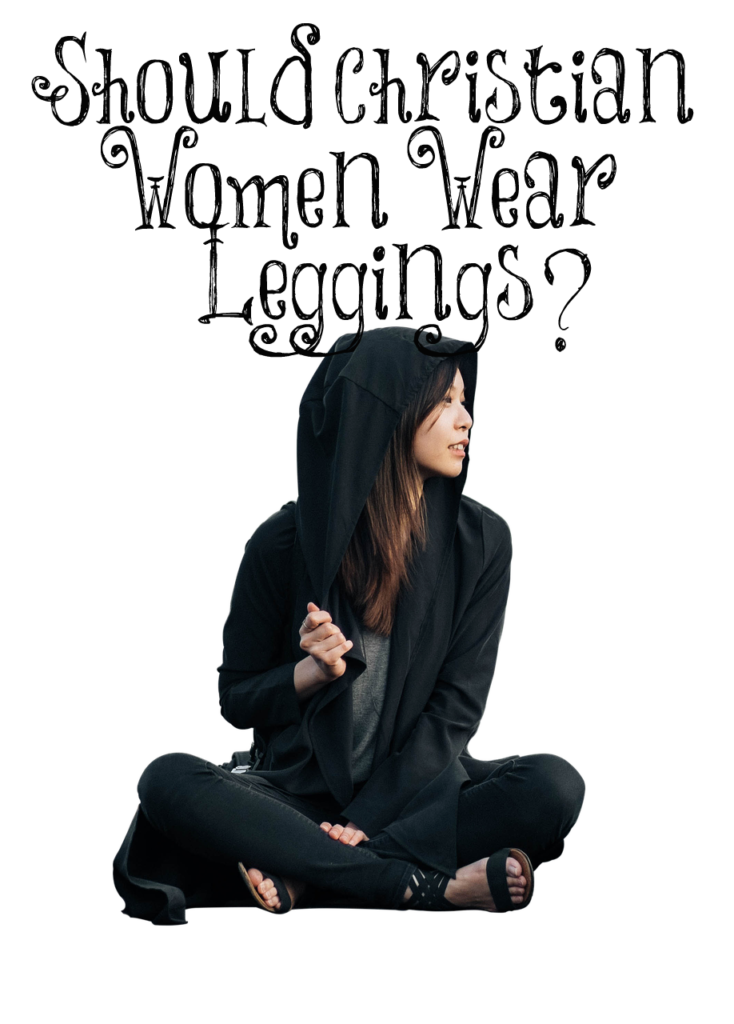 Recently, I asked the women in the chat room this question: “Would your husband say that leggings or yoga pants that don’t cover up the back and front side are immodest and if so, why?”

Amanda: “Mine thinks they are trashy in public. At home, when worn for him, he likes them quite a bit. Lol.”

Kelli: “Mine too!! He likes them at home but not for others to see ? If I wear them, I wear a long top. I have always been a modest dresser so I wouldn’t dare wear them any other way.”

Bethany: “Yes, mine loves them for his eyes only.”

Sarah: “Absolutely. Anytime I wear anything above the knee, or too tight pants/leggings, etc. hubby always lets me know and asks me to change. I’m very thankful he does this because sometimes I don’t even realize and he is helping me protect my modesty and my body so other men aren’t staring at it! And I don’t want them staring; it’s only for my husbands eyes. He also says we need to set an example and not look like the world.”

Heather: “I live with my husband and two single men. We just discussed leggings/yoga pants and they were all in agreement that they are immodest and decision making in the presence of a woman wearing them is difficult.”

Kayla: “Yes, my husband only ever complains about women wearing yoga pants and leggings and says you can see everything and it’s ridiculous.”

Verna: “Yes, he thinks they’re immodest because they show pretty much everything.”

Sarah: “My husband prefers me in skirts and dresses.”

Crystal: “My husband despises those pants. Our daughter has to wear shorts or a skirt over them.”

Diane: “A few years ago when women started wearing them my husband couldn’t believe it. He told me he doesn’t know where to look.”

Amy: “I’ve never owned either kind. Our daughter wears leggings maybe a few times a year under an above the knee dress or very long top. He doesn’t mind. She does occasionally wear leggings with a T-shirt to bed, and of course no one sees that outside our house, so again, that’s fine. We don’t really talk much about how other women dress, so I don’t know what he’d say if I asked him. And in our area, yoga pants have been so out of fashion for YEARS, so he wouldn’t have a clue what they are.”

Heather: “His answer: I’m old school. I absolutely think it’s immodest. Why? Well for one, it leaves zero to the imagination. You can see everything if you look. I look away. But like I said I’m old school.”

Jennifer: “My husband never said anything to me about leggings. (I only wear them around the house) but when our daughters hit puberty he banned them outside the home. Unless under a dress or skirt.”

Robin: “Yes, mine would. He says they show too much and are immodest. He also said he doesn’t need to know what kind of undies women are or aren’t wearing under them and also says some ladies just shouldn’t even be wearing them. He does allow them in the winter under our skirts for warmth.”

Rachel: “My husband also thinks leggings are immodest. Similar to a woman rolling out of bed and walking down the street in her pajamas, a little strange. I wear them at home in the privacy of our home, as I’m pregnant and they’re the most comfortable thing to wear.”

Bethany: “Yes, because you can see every detail. If I’m around the house in just leggings he enjoys it so he wouldn’t want other guys seeing that.”

Tiffany: “My husband LOVES me to wear them at home but I don’t think he would approve of anyone else seeing me in them. As is I only wear them to A-work out or B-sleep in.”

Terry: “My husband thinks that not only are immodest but also inappropriate without a long top or skirt or dress. They reveal every crease and crevice of a women’s private parts. I would never disrespect myself or my husband by wearing them in public unless they are under a knee length loose dress. My husband also thinks that dresses with spaghetti straps without something to cover the shoulders is immodest as well as low cut clothing with the breast falling out all over the place. He said he is uncomfortable talking to a lady that is barely clothed. ?”

Paulina: “Absolutely. It was always a major turn on for him.”

Sarah: “He says leggings and skinny jeans are immodest unless the shirt/dress covers the butt. I wear leggings in public occasionally but only with dresses or very oversized shirts.”

Tammy: “Yes, my husband hates them. He says it’s no different than being naked with spray paint covering you. I don’t wear them or allow our daughter to wear them either.”

Markie: “Our rule is the shirt must cover our buns and front.”