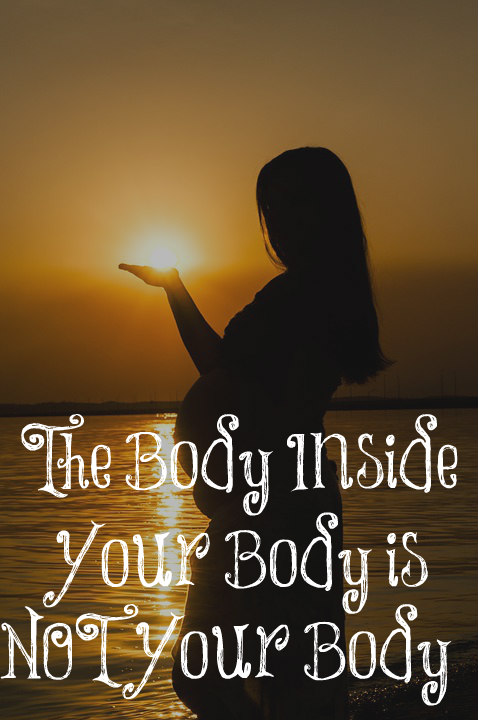 Writen by Joel Ohman, Executive Director of AbortionFacts.com and author of the bestselling (and controversial) Other Bodies, a secular fiction book that presents the Christian pro-life viewpoint in compelling Young Adult thriller form.

Pregnancy is beautiful, powerful, amazing. Where there was one, now there is two. God creates, and in His astonishing generosity, He grants women the opportunity to share in this new, generative, life-forming process.

A new body is formed.

But with this wonderful opportunity comes weighty responsibility, because beginning at conception, every pregnancy involves two or more bodies.

No matter how you spin it, women don’t have four arms and four legs when they’re pregnant. Those extra appendages belong to the tiny human being(s) living inside of them.

The slogan, “My Body, My Choice,” betrays a tragic misunderstanding of what is taking place inside the womb. At no point in pregnancy is the developing embryo or fetus simply a part of the mother’s body.

There are a number of clear biological facts, and all sorts of legal precedents, that easily refute the claim that the embryo or fetus is simply part of the mother’s body.

It’s a hard truth for many to hear though.

Sometimes the best way to communicate hard truths is to do so in story form. Aesop used fables. Jesus used parables. Even the nursery rhymes of “Mother Goose” contain deeper, sometimes darker meanings.

It wouldn’t be my first time. I’ve written the #1 bestselling YA dystopian trilogy, Meritropolis, so I was well aware of the process, and I love to write, so that wasn’t the issue, and yet…

I didn’t want to write this book. I fought it, but the idea kept growing inside of me, and it wouldn’t leave me alone. It was a crazy idea, really. But, when I tried to sleep, it whispered to me. When I tried to write something else, it tugged on the peripheries of my consciousness, daring me to look it in the eye. If I were to do so, I knew what it would mean though. Career suicide, most likely. Too controversial. Too ambitious. Delusional, really.

Let’s be honest; I’m a middle-aged, white guy writing a book about abortion, set in the inner city, and told from the POV of a young girl, all in a dystopian, futuristic America that’s eerily similar in many ways to the world we find ourselves in today. Not to mention, there are complicated issues of reproductive rights, teenage pregnancy, feminism, classism, assisted suicide. One could be forgiven for thinking I’m in way over my head.

And then there’s the hate mail. If I can be transparent, I like getting emails from my readers at 3 a.m., telling me they stayed up late, reading my books, and then, in all caps, WHEN IS THE NEXT BOOK COMING OUT? Those emails are nice. The emails (and reviews) that are not so nice are the ones where I’m accused of being a lunatic, fundamentalist, backward, woman-hating, white-privileged, out-of-touch cis-male Christian. And those are just the words that I can print. The other adjectives are … even less nice.

But the idea was still there, tempting me, taunting me to look it square in the eye and just describe it for what it was: a hard truth about a hard, broken world. I don’t claim to have all the answers, and what answers I might have are not easy. But I think we can do better; we have to do better. I’m a Christian, so the words in the Bible, the words Jesus says, they mean something to me, of course—because I know him. I know what he’s done for me, given his very body for me—he has made the ultimate sacrifice for all other bodies—and I have the simple joy just to say he knows me. And yet, the truth of this idea, it seemed to be so fundamentally basic that we can all agree on it, whether believer or unbeliever, atheist, agnostic, searcher, dreamer, or skeptic.

The hard truth is this: the body inside your body is not your body.

That’s it. When coupled with the truth implicit in all civilized society—we don’t harm other bodies—then even the most atheistic naturalist among us has to admit, when we look at the ultrasound—even a young child knows; we all know—there’s another body in there. Where there was one, now, there are two. So, to delude ourselves into thinking it’s just my body, my choice betrays a tragic misunderstanding of reality.

To intentionally harm either of the bodies, mother or child, is wrong. Point blank.

But what if the pregnancy might do harm to the mother’s body? Of course, when two lives are threatened and only one can be saved, doctors must always save that life. But, if it is merely an inconvenience and not life-threatening, then the right to not be killed supersedes the right to not be pregnant. It is reasonable for society to expect an adult to live temporarily with an inconvenience if the only alternative is doing permanent and fatal harm to another innocent human body.

We don’t harm other bodies.

And, if being a feminist means believing that we are all equal—different but no less equal—then how can one claim to stand for women everywhere while refusing to stand for the little one inside of her?

I will praise thee; for I am fearfully and wonderfully made: marvellous are thy works; and that my soul knoweth right well.
Psalm 139:14