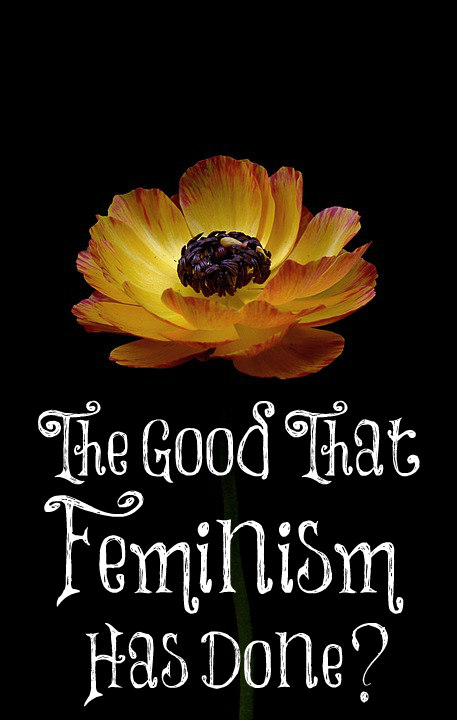 Many women through the years have tried to convince me that feminism has done a lot of good so why can’t I write about that. I don’t believe it has done any good, only harm. Did you know that the founding feminists were agnostics or atheists? “Outraged by the role religion had played in keeping women in submission, many feminist leaders of the early Feminist movement identified as atheists and agnostics. Almost every traditional religion puts women in an inferior or even degraded role compared to men.” The bottom line is that they hated God and His ways.

Whenever Mother Dearest comments on one of my blog posts, I want to make a post about it. Here’s her take on all of the good that feminism has done for us. It was a comment she left on my post Traditional Wives Set Feminism Back.

Feminism’s attempts to solve women’s problems is like ridding a barn of mice using a nuclear bomb: toxic and very far reaching for generations to come.

I firmly believe that nothing good has come from feminism which couldn’t have come about by godly means and moreover without the attendant destruction of individuals, families, and nations. Feminists claim that they eradicated the abuse of women, their failure to own land, their lack of a voice in the political process, etc. However, wherever the Gospel is preached and obeyed, women are treated as image bearers of the living God. They are honored and crimes against them are dealt with swiftly and justly. Women owned property even in the Old Testament (Zelophehad’s daughters).

Women who raise their children themselves rather than being serial delegators of motherhood have a profound effect on their children and can influence the political process of a nation for generations to come. This is why most accomplished men of yesteryear credit their otherwise obscure mothers for their guidance in their formative years. This is why when a camera is stuck in front of a gold medalist, a renown author, or pretty much anyone who has done well, we hear, “Hi, mom.”

Whatever genuine injustices (not the fabricated nonsense we hear of today which simply boils down to “stuff I don’t like”) women suffered before the dawn of feminism, were rooted in the sin of not loving our neighbor as ourselves. Rather than clearly preaching the Word, some misinformed men aided and abated the discontented perpetrators of feminism and now here we are, wading through the muck and mire of it all. (Mind you, it’s weak-willed men still propping feminism up rather than uniting to declare that the empress has no clothes and should “go home!”)

Thanks to feminism, women can fornicate and joyfully participate in the desecration of their bodies by multiple men. I would say “with no consequences” but I don’t want to speak lies. Thanks to feminism, women can kill their unborn children either by abortion or contraception. They can abandon their nursing babies to go back to work. They can enlist in the army and soon will be plastered all over far flung war fields. (I cringe to imagine the plight of female POW but I’m sure feminists reckon it would be just like SATC sans the big apple backdrop for all the fornication they condone today). Thanks to feminism, women can watch in horror as Bruce Jenner is declared the “Woman of the year” because being a woman has been stripped of dignity and inherent worth, so much so that a man can throw on a frock et voilà and he’s a woman.

Praise God for His Word. It is still active and still rescuing women from the very teeth of feminism today. By the power of His Word, God is sanctifying us – changing us in heart and conduct. I am one such woman and I don’t hesitate to tell every woman I know where I found the Living Water so that they too may never thirst again. Maranatha.

10 thoughts on “The Good That Feminism Has Done?”