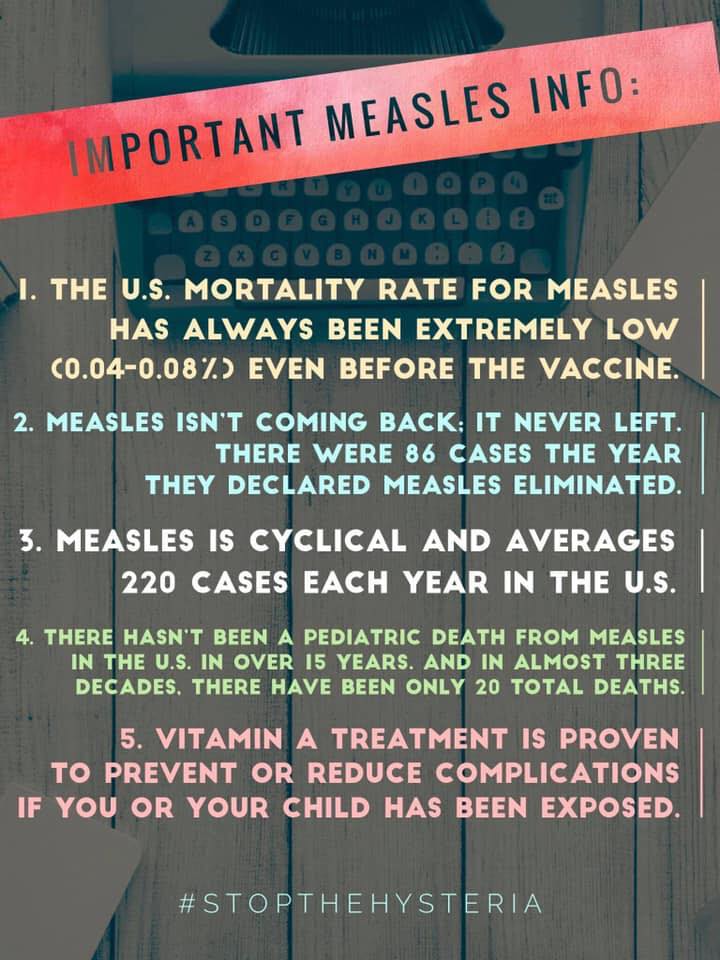 On Thursday, I posted this chart on my Facebook page. I didn’t create it and I tried to find out who did with no success but hysteria broke out among many of those who commented. “Where are the links to support these claims?” It didn’t take long for me to find links to support some of these claims, so I thought I would share them with those who are interested. Truthfully, it’s difficult to know who to believe on the issue of vaccinations because even the government seems to be in the pockets of the pharmaceuticals. I just know that there are a lot of toxic ingredients (like mercury) in them and aborted fetuses in some.

This was before the vaccine was widely used. “These data suggest that the chances of dying from measles in the US in the late 1950’s was probably closer to 1 in 10,000” from this article published by 2020 Science called What is the Risk of Dying If You Catch Measles. I could find this statistic on other sites, too.

In 2000, measles was declared eradicated but “In 2000, a provisional total of 86 confirmed measles cases were reported to CDC by state and local health departments, representing a record low and a 14% decrease from the 100 cases reported in each of the previous 2 years” from the government’s own website on measles.

It’s difficult to find when the last year a child died from measles since Google has taken down all sites against vaccinations so I went to Yahoo and was able to find a site that states that there’s only been one confirmed death of measles in the last 27 years! “A 13 year old transplant patient on immunosuppressive drugs. No other case of measles could be found in the area, so how it was transmitted is a mystery. CDC did not report if it was a wild strain or the vaccine strain.”

“The CDC attributes the drop in reported measles cases and deaths in the U.S. to use of the measles vaccine beginning in the mid-1960’s, however, published measles morbidity and mortality data give evidence that death rates for measles had dropped significantly in the U.S. before the measles vaccine was introduced in 1963” from this article What is the History of Measles in America.

“The World Health Organization (WHO) and the United Nations International Children’s Emergency Fund (UNICEF) issued a joint statement recommending that vitamin A be administered to all children diagnosed with measles in communities where vitamin A deficiency (serum vitamin A <10 µg/dL) is a recognized problem and where mortality related to measles is ≥1%” from this article Vitamin A Treatment for Measles.

I encourage you to do your own research. (You may have to use Yahoo or some other search engine to find articles about this topic.) As believers in Jesus Christ, this issue ought not to divide us. We should be able to discuss it in a kindly manner; for they will know us by our love. There does seem to be something extremely dark and foreboding when big corporations and social media platforms are shutting down any discussion against vaccinations and mayors are insisting that their citizens be vaccinated against their will. Just how powerful is the pharmaceutical industry?

Behold, I send you forth as sheep in the midst of wolves: be ye therefore wise as serpents, and harmless as doves.
Matthew 10:16

***Here’s a video that proves that before the measles vaccination, there was NO hysteria over getting the measles.

36 thoughts on “The Hysteria Over Measles”