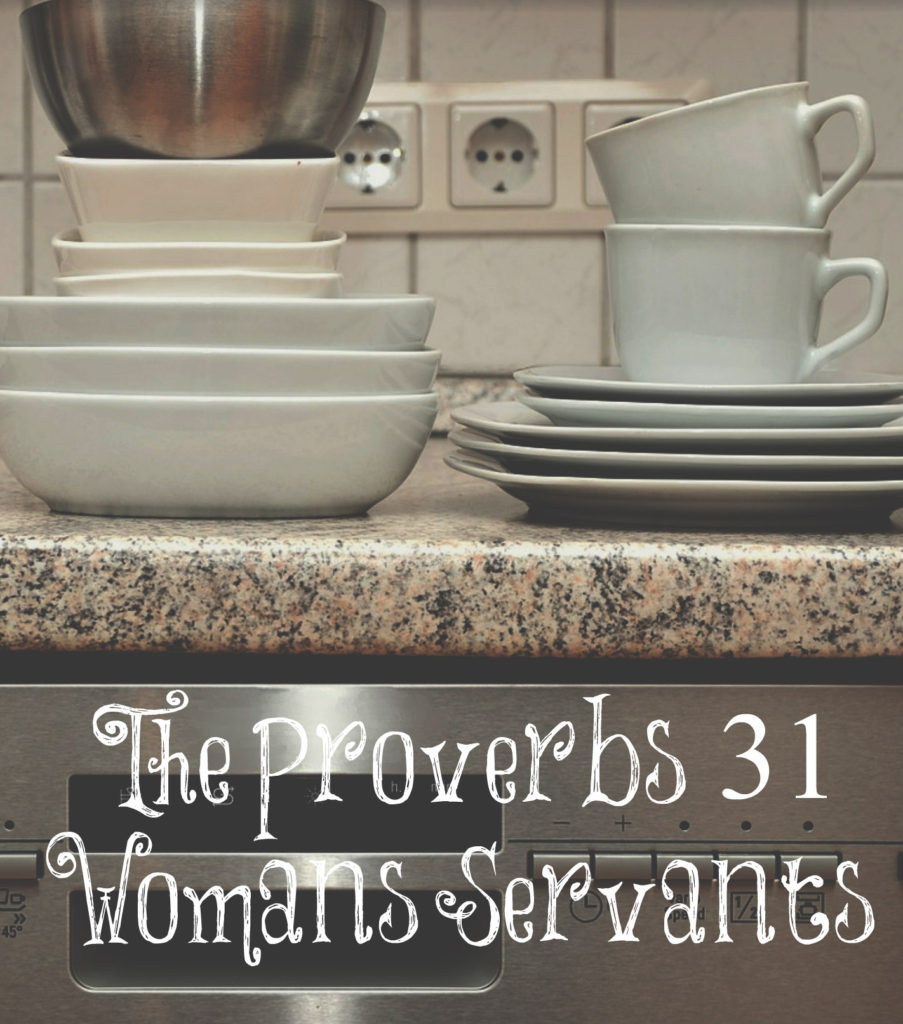 “The Proverbs 31 Woman was a career woman! After all, she had servants and these servants watched her children so she could have a career. Besides, these servants are career women. There were absolutely career women back in biblical days!” Yes, the modern woman wants to justify having a career that keeps her away from home all day long, putting her children in day care, and working for a boss, so they scour God’s Word and make up women who are like this.

Here’s the verse they use to justify the Proverb’s 31 woman having servants. “She riseth also while it is yet night, and giveth meat to her household, and a portion to her maidens” (Proverbs 31:15). According to the Webster’s 1828 Dictionary, maidens are “young women or virgins.” Therefore, they were most likely unmarried or without children. They were probably both. They helped the Proverbs 31 woman with household chores.

We must remember that back then, there were no refrigerators, freezers, washing machines, dryers, running water, indoor plumbing, toilets, dishwashers, toasters, electricity, heating at the flip of a switch, and so on. These are all our “servants” or maidens nowadays. There was a LOT more to running a home before the industrial revolution. Women had to work hard in their homes to keep it going.

The reason these maidens didn’t have children is because there was no birth control. Once a woman married, she had children, if she was able, and had to stay home with her children. These maidens were being trained how to be good keepers at home while they worked for the Proverbs 31 woman. As soon as they married, they went home to care for their own homes. If I was to guess, all of the “maidens” that worked for the Proverb’s 31 woman were not married, since it took so much to run a home back then. If they were married, they would need to be tending to their own homes.

We all are blessed to have these servants or “maidens” with modern technology. A lot of our work is simply at the flip of a switch! Housework takes a lot less physical labor than it did back in biblical days. There was no way for a woman with a family to put her children in day care (there were none), go to work in an office building or factory (there were no factories where she could have made clothing), and work for a boss.  She was known for looking well to the ways of her household and not eating the bread of idleness (Proverbs 31:27). She was a keeper at home.

It’s foolhardy for women to take women from Scripture to justify their lifestyles. God wants women at home caring for their husbands, children, and home. This is the safest place for women and children. Their children need them full time. Take God’s commands to us as is, and don’t try to twist them to say something they are not. The best place to be is in the center of God’s will. If you can’t come home full time yet, keep asking the Lord to provide a way. He wants you home, and with Him nothing is impossible!

Favour is deceitful, and beauty is vain: but a woman that feareth the LORD, she shall be praised.
Proverbs 31:30

12 thoughts on “The Proverb’s 31 Woman’s Servants”