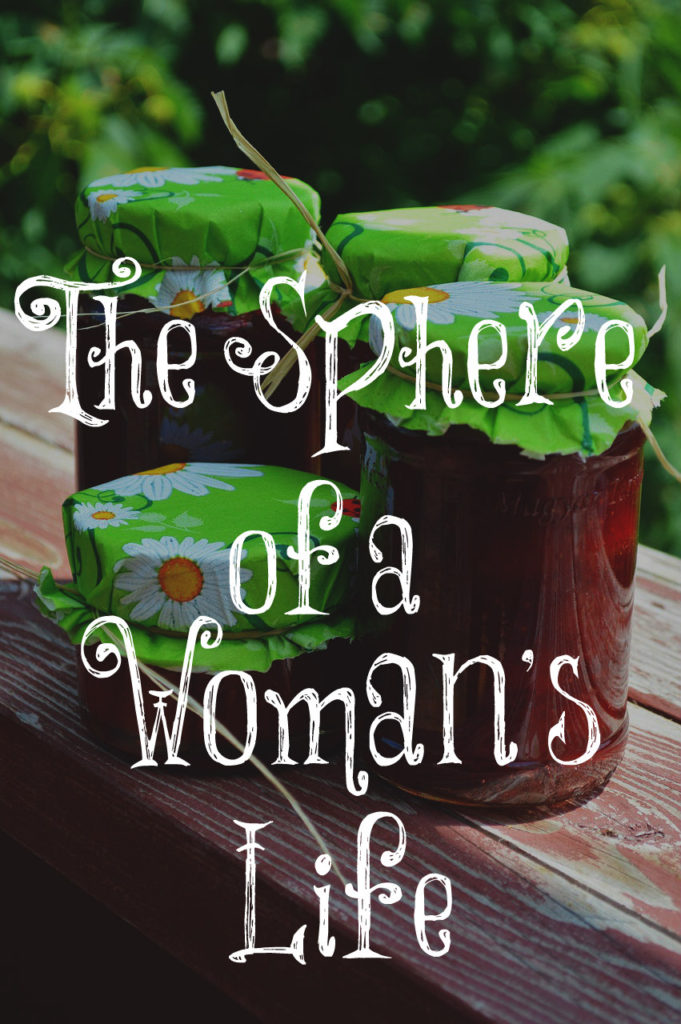 In 1996, Dr. John MacArthur taught a series on God’s Patterns for Wives. He went through Proverbs 31 and Titus 2:4, 5. When he finally got to the part about women being keepers at home, he knew it would be controversial since he wrote “now we get down to the nitty-gritty.” I know some of you are frustrated by the way I teach women to be “keepers at home” so I thought I would give you another teaching on this topic from a well-known and solid Bible teacher:

And then, number five, and now we get down to the nitty-gritty. They are to be workers at home. We’ve dealt with the attitudes of a woman, love toward husband, love toward children, wisdom and purity. Now, we turn to the very important issue, the sphere of her responsibility, workers at home, oikourgos, literally a house worker. This is the sphere of a woman’s life. It is her domain. It is her kingdom. It is her realm.

The word is derived from the word “house” and the word “work.” A house worker. It doesn’t simply refer, by the way, to scrubbing floors and cleaning bathrooms and doing that. It simply connotes the idea that the home is the sphere of her labors, whatever they might be. It is not that a woman is to keep busy all the time at home. It doesn’t mean that she can never go out the door. It doesn’t mean that she’s always to be doing menial tasks. But what it does mean is that the home is the sphere of her divine assignment.

She is to be the home keeper, to take care of her husband, to provide for him and for the children, all that they need as they live in that home. Materially, she is to take the resources the husband brings home and translate them into a comfortable and blessed life for her children. She is to take the spiritual things that she knows and learns and to pass them on to her children. She is a keeper at home.

God’s standard is for the wife and mother to work inside the home and not outside. For a mother to get a job outside the home in order to send her children even to a Christian school is to misunderstand her husband’s role as a provider, as well as her own duty to the family. The good training her children receive in the Christian school may be counteracted by her lack of full commitment to the biblical standards for motherhood.

In addition to having less time to work at home and teach and care for her children, a wife working outside the home often has a boss to whom she is responsible for pleasing in the way she dresses and a lot of other matters, complicating the headship of her husband and compromising her own testimony. She is forced to submit to men other than her own husband, likely to become more independent, including financially in fragmenting the unity of the family. She is in the danger of becoming enamored by the business world or whatever world she’s in, and finding less and less satisfaction in her home responsibilities.

Many studies have shown that most children who grow up in homes where the mother works are less secure than in those where mother is always at home. I think that should be obvious. Her presence there, even when the child is in school, is an emotional anchor. Working mothers contribute so often to delinquency and a host of other problems that lead to the decline of the family. It’s not that mothers who stay at home are automatically or categorically more spiritual. Many mothers who have never worked outside the home do very little in the home to strengthen their families: gossiping, watching ungodly and immoral soap operas and a host of other things can be as destructive as a working mother. But a woman’s only opportunity to fulfill God’s plan for her role as wife and mother is in the home.

Now, when children are grown, there is an opportunity for some kind of endeavor outside the home. Certainly, that option is viable, if it doesn’t compromise her as a woman, it doesn’t compromise the headship of her husband, it doesn’t put her under undue temptation, it doesn’t put her in an environment where she is going to be subject to the actions and the words of ungodly men. It may be that when the children are grown she can work part-time; she can even work full-time in an environment which is salutatory to her and which increases her godliness and strengthens her as a wife.

But the home is still her domain. And even widows or women whose husbands have left them are not expected to leave their domain and children to work outside the home. Paul declared this in 1 Timothy 5:8, “If anyone doesn’t provide for his own and especially for those of his household, he has denied the faith and is worse than an unbeliever.” And this means to provide not only for his family immediately, but his extended family.

The basic premise then is that even a woman without a husband, even a woman who may not have children still has the right to be cared for. I shouldn’t say not have children, but whose children are older, still has the right to be a part of the home. As He was hanging on the cross, Jesus, during the last moments of His life was concerned about His mother. And what He did in John 19 verses 26 and 27 was give her to John to take care of. Why? Well, she was most likely a widow. Joseph had no doubt died before this. Jesus was no longer there to take care of her. His own half-brothers did not believe in Him. He turns His mother over to John.

When a woman obviously still has children at home, her primary obligation is to them. If she has no children or they are grown, she has a responsibility to help teach the younger women and share the insights and wisdom she’s gained from her own walk with the Lord. She should invest her time when she’s older and her children are grown not in working in the world, hopefully sometimes that may have to happen, but investing in younger women.

Now, I realize having said what I’ve said to you tonight, I’m giving you the standard of Scripture. There are a lot of cases that you could bring up. What about this? What about this? What about this? All I can tell you is what the Bible says. You have to use your own wisdom. There may be a situation where a widow has to be employed because the care of her children is not provided by anybody. And frankly, most churches don’t come to the aid of these kinds of people. I thank the Lord that our church does in many, many cases.

There may be a situation where your children are in school and without any compromise to your children or your husband; you can do some part-time work. Many women have become very fruitful working out of their own homes and doing that, much like the Proverbs 31 woman.

But the standard is very clear in Scripture. The sphere of a woman’s influence is to be found in the home. The obvious things, of course, are when mothers go to work when they still have children young, even infants, babies, children who haven’t even gone to school yet, living in their home and they abandon them and turn them over to the care of someone else. Even churches sometimes foster that by starting day care centers for children under school age. Many times women work because they want to maintain a certain economic standard. The sacrifice of children and family for that economic standard is a bad decision.

You say, “What about that woman who is very capable, and competent, and energized, who has an industrious attitude, who’s a very gifted person? She can take care of her household responsibilities because we live in a day when there’s so many great appliances and you’re not out there on a rock beating your dirty clothes out. We have all of that, and she’s got time on her hands, can’t she develop some enterprise?” Of course, that’s what the Proverbs 31 woman did, of course.

The focal point: she provides for her husband expressions of love and care. She provides the same for her children. She leads and guides and teaches her children so that they can become godly children. She is in the home, secure, and protected, and kept from the influence of evil men and potentially wicked relationships. She lodges strangers. She humbly washes saints’ feet. She shows hospitality. She devotes herself to every good work. And that’s her domain.

Obviously, this is wondrously accommodated by a godly husband, right? It becomes very difficult when you don’t have a faithful husband. It is at that point the extended family steps in to help. If there’s no extended family to help, at that point the church steps in to help so that having lost a father, the children don’t also lose a mother. This is the church’s responsibility.

Vivian Gornick, a feminist author, writes, “Being a housewife is an illegitimate profession. The choice to serve and be protected and planned toward being a family maker is a choice that shouldn’t exist, and the heart of radical feminism is to change that.” End quote. Of course. Whatever God says, they want to unsay.

In New Testament times, as in Old Testament times, a woman in a home had to grind flour, bake everything from scratch, launder, cook, nurse and care for children, make beds, spin, weave, keep house, care for guests. And in the same time and with the full energy and commitment, devote herself to express her love to her husband, to her children and to God Himself. A tremendous assignment.

You say, “Why in the world does God want women to be so busy?” At the risk of sounding trite, it keeps them out of sin. Proverbs 7:11 gives a startling picture of a harlot. It says this about a harlot: “She is boisterous and rebellious, and her feet do not remain at home.” She doesn’t find her home sufficiently fulfilling. She needs something else, and that leads her into sin.

To most of our society, this is all absolutely ridiculous stuff. And we get so engulfed in this kind of thinking because of the society around us that it may even seem a little strange to us, but this is the Word of God. Godly women are to be content at home, and to be content to love their children and love their husbands and serve their families in their homes and serve the Lord.

One of the most wonderful things that the church has ever experienced is the ministry of women. All of the tests and the studies and surveys indicate that about 60 percent of all church life is cared for by women. Evangelical churches are populated by women. They say about 37 percent of evangelical churches are men. The church has always benefited by godly women who work in the home, and when they have time they minister on behalf of the church. And as women abandon the home for the world, they also abandon the church.

12 thoughts on “The Sphere of a Woman’s Life”