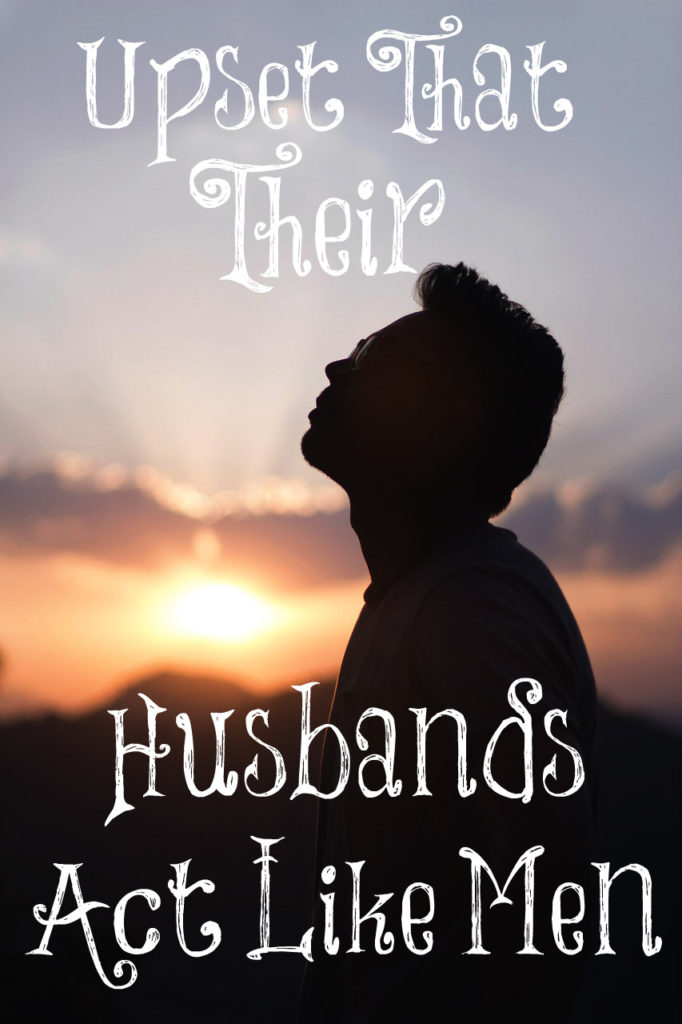 Many women are continually upset at their husbands because their husbands act like men instead of women. Once women understand that men are different than them, they will be more content with their husbands but they sure aren’t being taught this important truth these days.

An article titled Women Aren’t Nags – We’re Just Fed Up explains clearly the faulty thinking of women today. First, the author wanted her husband to take care of all of the details of hiring the best housekeeper possible and was frustrated that he didn’t do this. “What I wanted was for him to ask friends on Facebook for a recommendation, call four or five more services, do the emotional labor I would have done if the job had fallen to me.”

She asked this from her husband for a Mother’s Day gift but was disappointed that he wasn’t the one finding a housekeeper. I would have encouraged her to simply find one herself and stop being upset with her husband. This gives Satan a foothold in the marriage. Love shows grace and mercy freely.

“The gendered assumption is that ‘men are the problem solvers because women are too emotional,'” she explains. “But who is really solving the bulk of the world’s problems at home and in the office?”

Then there was a box in the way yet she refused to tell him that it needed to be moved so she responded to him:“That’s the point,” I said, now in tears, “I don’t want to have to ask.”

Men can’t read our minds. If we need something to be done, we need to ask them kindly. Women wanting men to read their minds has led to so much destruction within marriages. Men aren’t mind readers. They aren’t women. They don’t think like women. Homes will always be a woman’s domain no matter how much women don’t want it this way.

“‘In general, we gender emotions in our society by continuing to reinforce the false idea that women are always, naturally and biologically able to feel, express, and manage our emotions better than men,’ says Dr. Lisa Huebner, a sociologist of gender, who both publishes and teaches on the subject of emotional labor at West Chester University of Pennsylvania…’but I would argue that we still have no firm evidence that this ability is biologically determined by sex.'”

“He restated that all I ever needed to do was ask him for help, but therein lies the problem. I don’t want to micromanage housework. I want a partner with equal initiative.”

Her job from our Creator is to micromanage housework. She married a man and most men aren’t housework-oriented like women. It’s in our DNA. It’s not in men’s since they were created to be providers and protectors and women were the ones created to be nurturers and keepers at home.

“However, it’s not as easy as telling him that. My husband, despite his good nature and admirable intentions, still responds to criticism in a very patriarchal way.”

The contentions of a wife are a continual dropping (Proverbs 19:13) From reading this article, we can see that she is extremely critical and unhappy with her husband. Placing unfair expectations upon our husbands is the quickest route to an unhappy marriage. Men are not created to be bossed around or criticized by their wives and they instinctively know it. They will either fight back or take flight.

“Bearing the brunt of all this emotional labor in a household is frustrating. It’s the word I hear most commonly when talking to friends about the subject of all the behind-the-scenes work they do. It’s frustrating to be saddled with all of these responsibilities, no one to acknowledge the work you are doing, and no way to change it without a major confrontation.”

It’s frustrating for these women because they are fighting against God’s ordained role for them. They are trying to force their role upon their husbands and a lot of husbands aren’t taking too kindly to it. Women’s work is to be “saddled with all of these responsibilities” (keepers at home), find their praise in knowing they are doing exactly what God has called them to do even if they receive no praise from others, and not try to change their husbands with confrontation since this never builds up a marriage. No, it tears it down.

“My husband does a lot. He does dishes every night habitually. He often makes dinner. He will handle bedtime for the kids when I am working. If I ask him to take on extra chores, he will, without complaint. It feels greedy, at times, to want more from him. Yet I find myself worrying about how the mental load born almost exclusively by women translates into a deep gender inequality that is hard to shake on the personal level.”

Instead of appreciating all of the good things about her husband and what he does to lighten her load, she worries about things that can’t be fixed. Men and women are DIFFERENT. They always will be because God created them this way, yet feminists continue to fight against it until they have destroyed everything good in their lives. Feminism is fighting against the ways of God. They are fighting God. Period.

Do you see how confusing life and marriage becomes when we leave the clearly defined roles the Lord has given to us? It’s not worth it, women. Don’t nag your husbands to help with the housework. Do it cheerfully, as unto the Lord. Just because women have left their homes in pursuit of careers doesn’t automatically mean that men want to take over the work at homes that women have left. All it has done is cause destruction in its path.

10 thoughts on “Upset That Their Husbands Act Like Men”