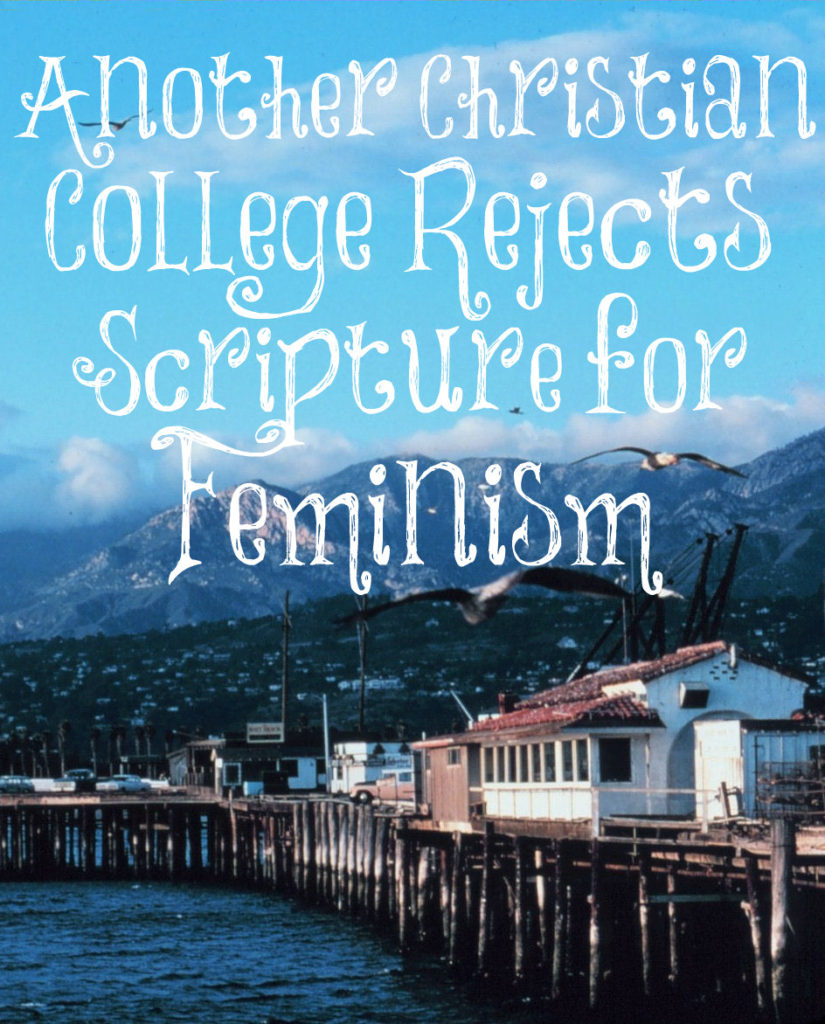 My husband and I graduated from Westmont College in 1980. During our time as students, there were no female Bible professors. Robert Gundry was our Bible teacher at the time and was very well known. His position has just been filled by a woman named Sandra Richter. She wrote a post against what John Piper had to say concerning women professors at seminaries. Here is what she wrote. (Now, remember, she is going to be teaching the Bible at a Christian University.):

“I keep finding my name posted all over Facebook in response to John Piper’s latest presentation on why women are not allowed to pursue their gifting to teach and preach. I have a lot of respect for John Piper. He has accomplished some amazing things for the Kingdom. But his exegesis on this point has been shaped (and distorted) by his culture, not the cultures of the New or Old Testaments. Reality is, that the Holy Spirit is the head of the Church–not any organization designed by humanity. And according to 1 Corinthians 12 and Ephesians 4, it is the Lord Holy Spirit who gets to choose to gift whomever he pleases–Jew or Greek, slave or free, male or female. I am grateful for the accountability that ordination boards keep in our systems. I am grateful for John Piper’s high view of Scripture. And I thank God that there is gate keeping going on as regards who moves into the role of shepherd.”

First of all, women not speaking in the church has nothing to do with cultures. It comes from the beginning of time since the reasons for these commands were that Adam was created first and the woman was deceived. The Bible is clear concerning who shall teach men and be in authority over them in 1 Corinthians 14:34, 35 and 1 Timothy 2:11-14. The Holy Spirit would never act contrary to the principles in God’s Word nor override them. When Paul wrote about Jew, Greek, slave, male, and female, he was referring to the fact that ALL who believe on the Lord Jesus Christ shall be saved.

“But Brother Piper, I’ll take you on any day on this topic. Deborah was not a mistake. Huldah was Prophet. Junia was not a man. Romans 16 is not an anomaly. Priscilla was a preacher. And the women prophesying in 1 Corinthians 11 were exercising the most treasured and authoritative gift of their known covenant. This all in a culture where dowries and bride prices were the norm, women were still required to cover their heads, children belonged to their fathers, and the legal and economic systems rarely recognized a woman’s right to any voice or influence. If she is called and gifted, Church, it is your job to recognize that gift, develop that gift, and deploy that gift. This isn’t your Kingdom, it is His.”

Now, I’ve not attended any theological seminaries nor do I have a doctorate like Richter does but her assessments are wrong. Deborah was not teaching men the Word of God in a church since the Church wasn’t established yet. She was a woman in the Old Testament during a time when Israel was rebellious to the ways of the Lord. She’s not a prescription for the women in the Church age. Deborah was a description of a judge thousands of years ago.

Huldah was a prophetess in the Old Testament. She didn’t teach doctrine to men nor was she in authority over them. She gave King Josiah a special word from the Lord. We are never told in the New Testament to try to become a Deborah nor a Huldah.

Junia was a man according to my Bible. “Salute Andronicus and Junia, my kinsmen, and my fellow-prisoners, who are of note among the apostles, who also were in Christ before me” (Romans 16:7). I believe the word “kinsmen” means that Junia was indeed a man. Even if he was a woman, as Richter claims, he was “of note among the apostles” NOT an apostle. God didn’t choose any female apostles.

The Bible does not say that Priscilla was a preacher. This is such an unbelievable stretch of the Word of God. There’s nowhere that she is recorded as preaching a sermon, teaching men (except one man that was mentioned when she was with her husband who most likely did the teaching), nor being in authority over men. She was married to Aquila and their names are often mentioned together. They helped the Apostle Paul in his ministry.

The women in 1 Corinthians 11 are not instructed to preach or teach men nor be in authority over them. They aren’t to prophesy in the church since this is forbidden and just a few chapters after this, Paul wrote: “Let your women keep silence in the churches: for it is not permitted unto them to speak; but they are commanded to be under obedience, as also saith the law. And if they will learn any thing, let them ask their husbands at home: for it is a shame for women to speak in the church” (1 Corinthians 14:34, 35). He would not have contradicted himself in such a way as Richter claims.

My husband, Ken, responded personally to Richter this way: I wish you would take Piper on in an in-depth discussion of this topic instead of appealing to a weak string of examples of women in ministry to overturn the clear precepts against women teaching in the church, as is clearly given in Scriptures. “I do not permit a woman to teach or to exercise authority over a man; rather, she is to remain quiet” (1 Timothy 2:12); and that an elder is to be “the husband of one wife,” etc. The actual mandates are many, yet you want to destroy them with a few crumbs of examples?

Is it possible that God wants Christian women in teaching ministry in the church? If so, you will not find this from anything written in the Word, but to the contrary, it is found in a new feminist culture. It is not Piper whose interpretation is lost in culture, but you are.

You and others have proposed a dangerous hypothesis that goes contrary to all of Church teaching and history until now, and goes against what the Word actually says. You postulate that because God can do anything He chooses He will go against His own Word on the matter. That the apostles’ instructions to the church were only cultural; a relic of the early NT times that God somehow thought best to keep in place in His church until now.

And where is your basis for knowledge and truth? A simple presupposition, an argument from silence, with zero proof, which goes against what God’s Word actually says.

What a coincidence that it comes just as feminism takes its roots in our culture. Is the Church to influence culture or is culture to influence the Church? I believe that question was settled long ago by Jesus himself when He said, “If you were of the world, the world would love you as its own; but because you are not of the world, but I chose you out of the world, therefore the world hates you” (John 15:19). Hmm… given the accolades it seems the world is loving this now.

For I testify unto every man that heareth the words of the prophecy of this book, If any man shall add unto these things, God shall add unto him the plagues that are written in this book: And if any man shall take away from the words of the book of this prophecy, God shall take away his part out of the book of life, and out of the holy city, and fromthe things which are written in this book.
Revelation 22:18, 19

38 thoughts on “Another Christian College Rejects Scripture for Feminism”