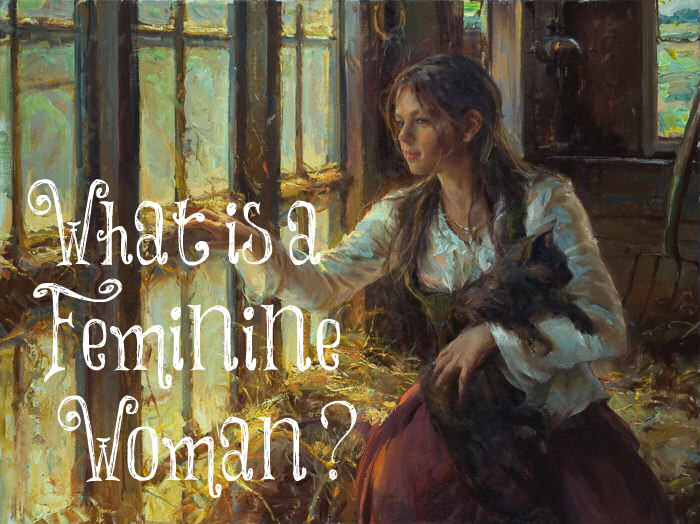 A feminine woman is motivated by love of husband and children. She is the heart of the family, devoted to her husband and children’s well being. This is her career. A woman who is preoccupied with another demanding career cannot pay attention to her family. Love is mainly paying attention. There is a New Yorker cartoon where a child is wearing a welder’s mask and using a blowtorch to write, “I need love” on the living room wall. His mother says to her friend: “He’s just doing that to get attention.”

Career is a feminist lie. Since when are careers the source of human fulfillment? What is so great about being an Assistant Loan Manager at a bank? Is society expected to provide legions of eager feminists with “fulfilling” careers to compensate for their loveless lives?

Feminists are teaching women to be “strong and independent.” This is not feminine. Men respond to a woman’s need. We want to rescue the damsel in distress and to win her favors. This archetype is also innate in women. She wants to be enlisted by a man.

A feminine woman DEPENDS on a man. This doesn’t mean she is an emotional waif. She is competent but she doesn’t pretend to be independent. Men and women need each other to be whole. As long as I have my wife, I am self-sufficient. So is she.

Just as the woman is the heart of the family, the man is the head and shoulders. A feminine woman is her husband’s partner (I would change it to “help meet”). They make decisions together but he has the last word (I would add that the wife lives in submission to her husband’s leadership). Men must be the visionaries, captains and navigators. A woman’s most important decision is the man she chooses to love and marry.

A feminine woman is modest. She wants a man to pay attention to “her” so she doesn’t flaunt her sexuality. A woman wants to be loved more than anything in the world. She wants to be “known” in all her divinity. This happens when she is truly loved. Is it a coincidence the Bible uses the word “know” as in Abraham “knew” Sarah, to speak of sexual intercourse? All women are beautiful when they are loved. Women’s liberation has taught women to pursue sex for its own sake, as though they were men. This is not feminine. If a man prefers a new car, why would he marry a “used” woman? He doesn’t want a car that’s been driven by a lot of men. He doesn’t know where it’s been, what damage has been done. He will choose a brand new car. In my wife’s words: “A man wants to be a woman’s first lover; a woman wants to be his last.”

If men chose wives with the same attention as cars, more marriages would succeed. Women are the vehicles to the future, in terms of emotional fulfillment and family. If men knew where they wanted to go, they would choose women who would get them there. They would not be blinded by sex.

A feminine woman tries to please the man she loves. No, this has not been outlawed, it just seems that way. A feminine woman generates love by giving love. She empowers her man by believing in him. Love is expressed in actions and effort. Baking a pie is an act of love. So is making the home beautiful. Are we so blind, impoverished and demoralized that we cannot appreciate this? Why have we allowed feminists to stigmatize homemaking? Women would be more than happy to be homemakers if it received the recognition and appreciation that it deserves.

A feminine woman has grace, beauty and wisdom. These all come from staying in touch with her spirit and not pursuing an exhausting career that requires masculine qualities.

**I don’t know anything about this author, if he is a Christian or not, and I did add and delete a few things that I disagreed with but overall, I believe he wrote a lot of truth that we can learn from!

6 thoughts on “What is a Feminine Woman?”