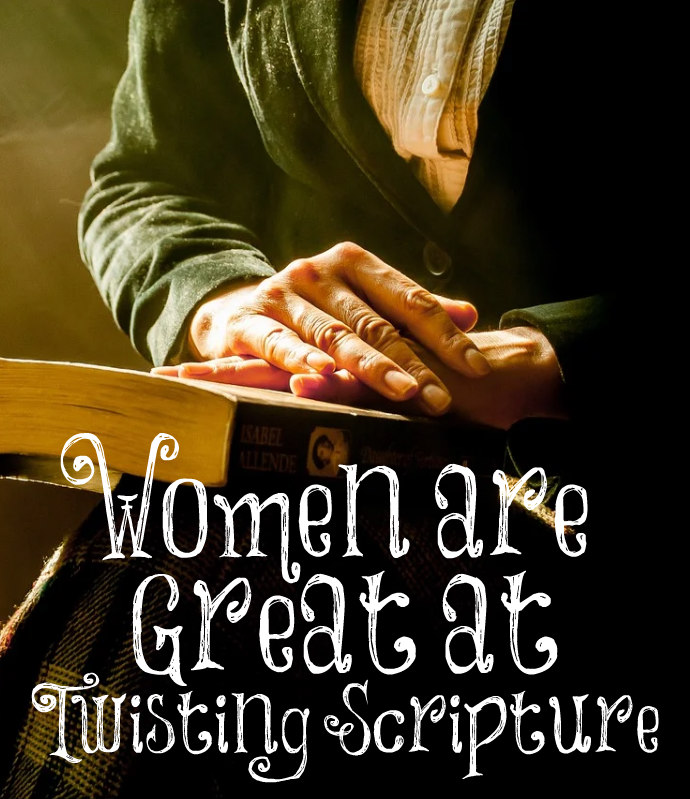 One of the reasons God gives for women learning in silence with all subjection in 1 Timothy is that Eve was deceived. The perfect first woman was deceived, and this is why women are not to preach/teach in the churches. If the perfect woman Eve was deceived, then all women can be deceived IF they are not careful but instead disregard God’s teachings to them.

If women are not to teach in the churches because they are more easily deceived, then I don’t think they should be teaching the Bible except for how it pertains to biblical womanhood. God does command wise, older women to teach the younger women biblical womanhood.

How are women more easily deceived? It’s easy to tell by listening to female preachers. Instead of interpreting Scripture as is, they twist it to mean what they want it to mean. “Women are to learn in silence with all subjection.” They don’t agree with this verse so they give a laundry list of why this verse and other verses that back it up aren’t applicable today. Throughout my past teachings on this topic, I have shown how each of those exceptions weren’t exceptions at all. They just want to preach and many women want to listen and learn from female preachers.

I have also noticed that once these female preachers compromise on the issue of learning in silence with all subjection, they begin compromising on other areas in the Bible too. They begin accepting things that God clearly calls sin. It’s not a good path to be on, women. Stick to what God’s Word plainly teaches. Eve was deceived because she questioned what God had commanded her. Women are easily deceived because they question God’s commands to them. Don’t be one of them.

Many women try to twist submission to one’s husband and being a keeper at home. They don’t want to obey their husbands like Sarah obeyed Abraham. No, they want to have it their own way. They also don’t want to be a keeper at home. “It doesn’t really mean a woman must be a keeper at home full time,” they will say. Oh, really? Keeper AT home seems like God wants women’s work to revolve around their home as the Proverbs 31 woman’s did; for she was known for looking well to the ways of her household, NOT having a career.

Why doesn’t God command husbands to ask their wives at home or for women to go to Women’s Bible Study if they have a question? Because God made men the heads of the homes, and wives are to submit to their leadership. If women aren’t to teach in the churches because they are more easily deceived, who gives them the authority to teach other women God’s Word while completely neglecting what God specifically commands they teach, namely biblical womanhood? Don’t be led astray by false female teachers/preachers.

Most Women’s Bible studies are worthless in my opinion. If a Women’s Bible study doesn’t teach biblical womanhood, I encourage you to not support nor attend it. Besides, they are usually studying female preachers’ material. This is why Christian marriages and homes aren’t any better than ungodly homes. Learn God’s Word from godly preachers like John MacArthur or Michael Pearl. Learn from your pastor at church. If you have a question, ask your husband at home. If he’s not a strong believer, asking him might just get him into the Word and want to study more. God’s ways are perfect.

For God is not the author of confusion, but of peace, as in all churches of the saints. Let your women keep silence in the churches: for it is not permitted unto them to speak; but they are commanded to be under obedience as also saith the law. And if they will learn any thing, let them ask their husbands at home: for it is a shame for women to speak in the church.
1 Corinthians 14:33-35

57 thoughts on “Women are Great at Twisting Scripture”