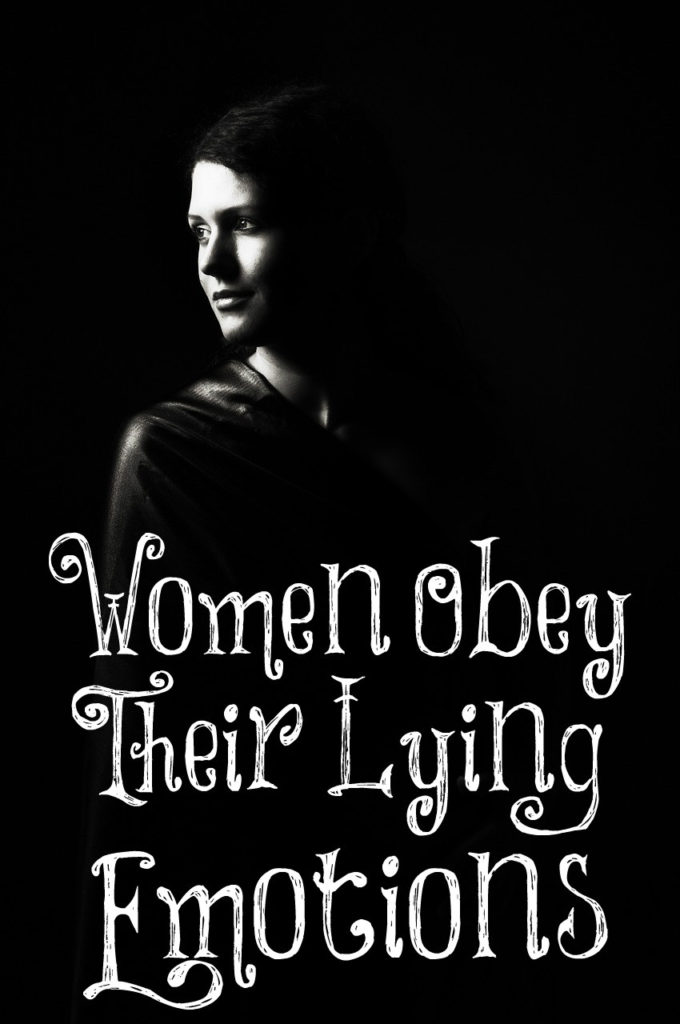 Dennis Prager states on his radio program frequently that men’s battle is with their sexual nature and women’s battle is with their emotional nature and I believe their desire to control. Douglas Wilson has written an absolutely brilliant piece about this titled Miserable Wives. I was once a miserable wife. I allowed my emotions and feelings to be the authority in my life instead of my husband and I see many women destroying their marriages doing the same thing.

Women are 70% more likely to divorce their husbands than husbands divorcing their wives. Their husbands aren’t meeting up to the expectations they have created and these false expectations are tearing apart their families. Many women don’t believe they need men in their lives anymore and can do it on their own but sadly, they find out quickly that it’s not that easy. Douglas Wilson wrote this article about an entirely fictitious person but I can tell you that it fits me almost to a tee and I am sure it does many of you as well.

“You say that you know Jon loves you, but then you say in the next breath that you feel unloved. And in every battle between your knowledge and your feelings, which one wins? You take the word of your lying feelings over the word of your accurate assessment, over against your knowledge. Your feelings are your authority, even when you know they are being deceitful. Worse yet, Jon takes them as authoritative as well.”

From the day Ken married me, I knew he loved me but he didn’t show it to me in the way I wanted him to show it. Therefore, I would be continually upset with him when he wasn’t acting like I wanted him to act and I wasn’t getting my way. These feelings would swirl in my mind until I made a mountain out of a molehill and spewed my irrational contempt towards him in a fit of anger. Then I would give him the silent treatment until he apologized appropriately. I was allowing my lying emotions to destroy our relationship.

Ken tried to speak truth into my life but for some reason I was deaf to what he said. He would say the same things over and over again but my emotions and feelings blinded me to my sin so we would continually argue about them. He was a good man. He worked hard. He was faithful to me. He deeply loved his children and was very involved in their lives but I all I could see were his faults and my emotional lies.

“But not only is he up against you—and you are, remember, kind of a force of nature—he is also up against the entire secular world and most of the Christian world. He is up against all your marriage counselors to date. He is up against the medical profession, including your doctor who prescribed your anti-depressants. In short, he is pretty close to being the soldier trying to explain to his drill sergeant how it is actually the rest of the army that is out of step. He is in a difficult place.”

No one spoke truth into my life other than Ken but he was “just” my husband and he didn’t understand how I “felt” because he wasn’t a woman. Yes, we went to counseling and they usually looked at Ken and told him to love me more or tried to figure out my childhood interferences. He sought out older and wiser men’s advice and they told him to love me more so he tried but it never worked because he always fell short of the expectations I placed upon him.

This is why I believe God has commanded older women to teach the younger women to love and obey their husbands (Titus 2:4, 5), not counselors and psychologists. Older women understand the struggles younger women have with their emotions and desire to control and can tell them plainly what God commands them to do instead.

“Now here is what you can do, and I am afraid it is an unpleasant prescription. You can submit to your husband, entirely and with a whole heart. You can determine that you are going to follow and obey him. He is good man. He is not going to take advantage of you. He is no jerk. His one great failing is not one that places him anywhere in the neighborhood of being an abuser. On top of this, your deliberate withholding of a submissive spirit is why things can never be smooth between you.”

After I read Debi Pearl’s book Created to Be His Helpmeet and I was no longer blinded to my sin in our marriage mess, I knew that I had to learn to become a submissive wife who reverenced my husband. The first thing I did was apologize to him for my behavior and allowing my emotions and feelings to hurt our marriage so badly. I had to begin treating him with kindness and warmth. I had to learn to trust him because he was trustworthy. He was my head; the head that the Lord had given me and I chose to marry. My unsubmissive and rebellious spirit had caused havoc on our marriage for way too many years so I had to give it up and obey God.

You need to go to Jon and seek his forgiveness for being so disrespectful of his efforts, apologize heartily, and tell him that you have resolved before God to obey him in everything. Ask him to help you to do that. I am quite aware that giving this kind of counsel is probably illegal in all fifty states, so I would be obliged if you didn’t post this on the Internet. I have enough troubles.”

If you aren’t taking your thoughts captive to the obedience of Christ and renewing your mind with God’s truth, you are allowing the lies of our culture and your own emotional nature to control your behavior. Instead of doing this any longer, determine to begin obeying your husband even when you don’t feel like it. We don’t obey God just when we feel like it but because it is right. Yes, I asked Ken to help me learn to respect him, not argue with him anymore, and submit to his leadership. I not only didn’t hide this, I wrote a book about it (that all those who hate truth and God’s ways love to speak evil about and slander me but it’s to be expected so I rejoice!).

“Men and women are God’s invention. He designed us, and He designed us to function in a particular way. When we abandon that way, we lose our way, we lose our grip. Deserting our assigned sex roles is like painters abandoning paint, brushes, canvas, and going in big for conceptual art. The results just get increasingly silly and incoherent. The greatest accomplishment of feminism as such conceptual art is to make women miserable. Many of them have figured out that the promise ‘you can have it all’ is a lie, and have blamed feminism for lying to them, and have turned away from feminism. Other women, including many Christians, and I would place you in this category, have blamed their husbands for feminism’s failures.”

Begin obeying God by obeying your husband. Make your husband your authority instead of your lying emotions. You will one day find that you are no longer a miserable wife but one that enjoys being married to the man you chose as your husband until death do you part. Let this be no longer be said about you: