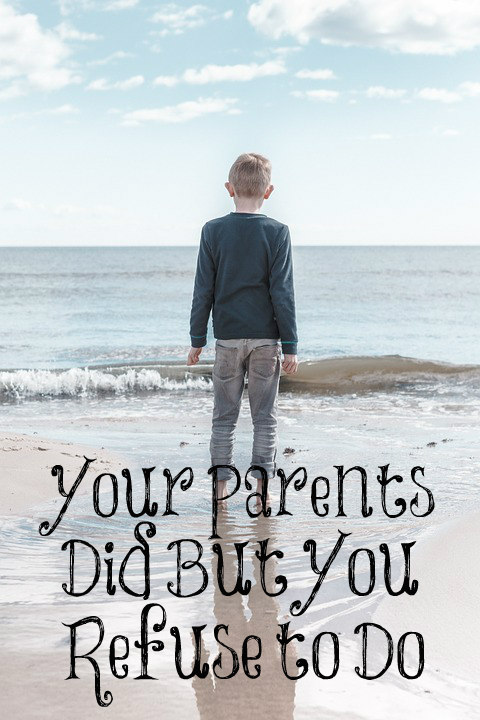 What are some things your parents did but you refuse to do? My parents argued frequently in front of us as we were growing up. I refused to do this to my children. My mom loved soap operas so I did, too, as I was growing up but as soon as my oldest daughter turned five years old and began watching them with me, I quit cold turkey along with all other immoral TV shows and movies. My parents didn’t have many boundaries for us as teenagers. We wanted boundaries for our teenagers. Boundaries are protection and they have thanked us as adults.

I asked the women in the chat room this question and here are some of their answers. Some of what these women endured as children will break your heart.

“There won’t be sleepovers. We won’t drink alcohol around our children. We will never cuss, will never push college on her children, and have limited screen time.”

One sadly wrote this, “Hit/beat out of anger. Make a child choose who is right when mom and dad fight. Tell kids financial struggles. Tell kids how much in-laws are despised. Ask kids to hide mail/bills, keep infidelity secrets, have sleepovers, let kids ride in cars with drunks, make kids pay for their own birthday parties with money they received as gifts, leave them home alone and responsible for siblings at a young age, roam the neighborhood and go into people’s homes unsupervised, etc. The kids will not be allowed to physically fight each other or spread lies about each other.”

Another one wrote, ” Tell them they were an accident, push careers/college/feminism. Tell them they are too fat when they are a healthy weight. Convince them they have health problems they don’t have. Call them names. Hit out of anger and for every offense. Tell them they’re the reason for their parents’ failed relationship. Say they won’t forgive them. Steal their money. Leave them alone with evil men. Make them hug those evil men. Leave them home alone to take care of their younger siblings at five years old. I could go on…”

“I will never tell my children they were a mistake or unwanted. I will never put my children against each other, while quietly watching bitterness grow. I will not play favorites to my children or future grandchildren. I will not allow sleepovers or sleep away at summer camps so that hubby and I can get a break. I will not push my girls to ‘have it all’ by getting a successful career, so they never have to depend on a man. I will not leave my children to be raised by daycares/public school systems so that I can work for more stuff/nicer cars/etc. I will not allow my teens to be out all night and unaccounted for. I will not drink in front of them (nor will I drink when they are not around). I will not pick on them about their weight or compare them to a sibling/friend/etc.”

“I will never pretend about Santa Claus, Easter bunny, and the tooth fairy.”

“If I can no longer homeschool for whatever reason, I will do everything I can to ensure my children are not placed in a public school. If my children ask to sit with me during church, I will not insist they join their own age group’s service. If my children disappoint me by not choosing to follow my dreams for them, I will not put them down or go on an emotional tirade in order to make them feel guilty and less than. If my children come to me with a health concern, I will not brush it off as nothing because it is too scary for me to think about. I will also not insist on college being the only path to achieving financial success. My parents gave my sisters and me a great childhood, but like all parents, they weren’t perfect.”

“I won’t let them play outside all day unsupervised without knowing where they are or what they are doing.”

” I won’t negatively compare my kids to other children whenever they’re not doing exactly what I want them to do (move the proverbial goalposts like giving a list of chores to do and then being upset when they didn’t do additional things not on the list without being told). I won’t teach them that God will ‘get them’ if they misbehave and refuse to apologize/admit to being wrong. I will not teach my girls to ‘get an education, have a career, and never depend on a man.’ I will never teach them (or my son) that men are ‘stupid, stupid, stupid.’ I will not tear down my husband and in-laws to my children. I will not vent my frustrations about my husband or other people to my children, even as adults.”

“My parents complained about each other in front of us, one parent much more so than the other. I have never and will never do that. Another thing was the instruction I received, ‘Do as I say, not as I do.’ I found it hypocritical and an attempt to excuse bad behavior. When I pointed it out, the response I got was ‘I’m an adult; you’re a child.’ As a result, I do not do anything I do not want my children to do. My husband and I apply the same standards to ourselves and strive to be examples to the children.”

“My mom allowed us to watch almost anything on TV and movies. She banned very few (the Goonies being one of those) but Dirty Dancing and Pretty Woman was totally fine 😳. My mom also allowed us to disrespect each other, therefore,disrespecting her eventually. And that’s putting it politely. I was more of an observer. I did not want to be like my sisters.”

“They let me ‘choose to explore my own faith.’ I also had unrestricted access to TV and internet (when it came out). I didn’t have any household chores and that was really hard to overcome as an adult. We lived on a farm so I wasn’t lazy but I was certainly sloppy. We never went to church and God was something I was left to discover on my own.”

43 thoughts on “Your Parents Did But You Refuse to Do”