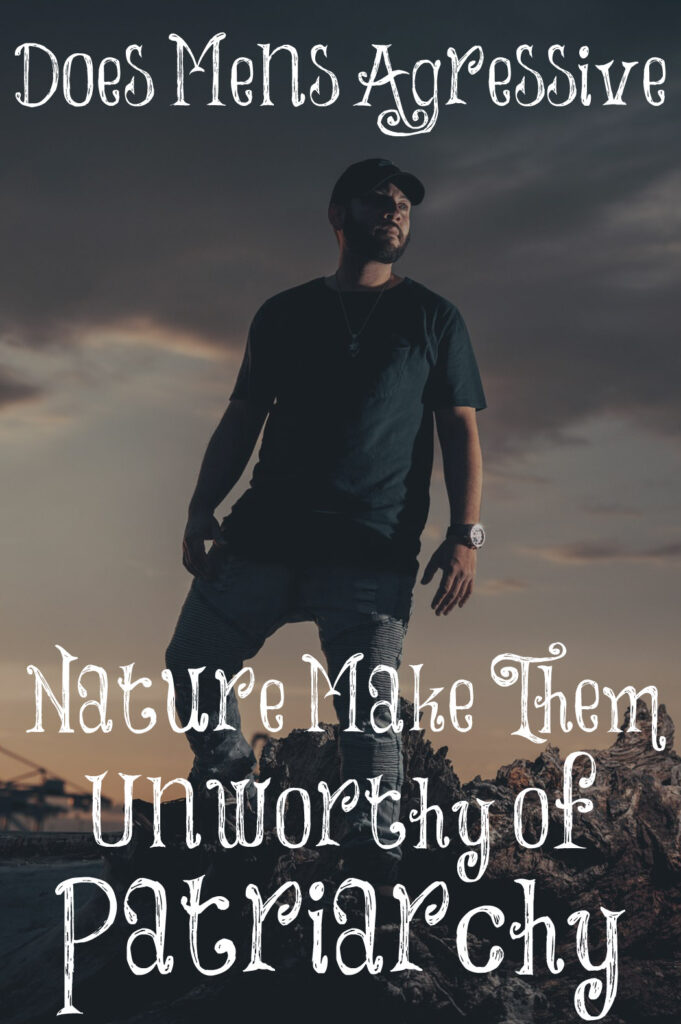 “Dear Lori, I have found your blog in recent weeks and have spent a great deal of time going through it. I think your doctrine is sound but sometimes I just can’t fathom how to live this way. I am a man, turned 21 and in flight school, and men are very wicked.

“Do you know how many men in the world beat their wives mercilessly? Men rape and steal and kill. Our nature is aggressive, and it causes us to do the most horrific crimes. This is why I have a hard time having faith in Patriarchy. You say a lot about the victim mentality of women but most of the time they ARE the victims. They did nothing wrong. They have no control over what happens to them.

“God created females and made them lovely and sensitive. The man was supposed to honor that. He didn’t. Even though I haven’t done crimes like this personally, I am still associated. Because I am a man, it is in my nature and I can’t escape it. I would never be worthy of a submissive wife no matter how much I try to pursue God.

“I feel like young innocent women will read your post only to be taken advantage of. It’s a horrible reality. It makes me ashamed, but it’s how we are.”

I don’t know one man personally in my 63 years who has ever beat his wife mercilessly. Yes, I know there are some cruel and wicked men out there, but I have never known any. I have only known men throughout my life who are kind to women. Maybe not always kind, but never cruel nor physically harm them. If a woman is married to a wicked man who is beating his wife mercilessly, she needs to seek a way of escape, but I do not believe this is the majority of men.

However, with the breakdown of the family and fatherlessness exploding, it will cause men to more cruel and angry and women to be less protected. This is why teaching Patriarchy and God’s will for men and women is vital. Most women aren’t taught how to be godly wives and mothers. They are only taught feminism and how to fight against the men in their lives. They are contentious and tearing their homes down. This is why women initiate up to 80 percent of the divorces. Many will claim their husbands abuse them because they aren’t meeting their “emotional needs.” This isn’t abuse!

Yes, most of the people in prisons are men, but as I stated, this is due to fatherlessness and the breakdown of the family. God made men to be aggressive so they would go out and make a living for their families and protect their families and culture from harm. Patriarchy is a good thing! It protects women and children. It’s the breakdown of Patriarchy that is destroying families, men, women, and children. Feminism is what has caused the great harm to our nation. Our nation was a MUCH safer place when the men were the leaders and in authority.

You wrote that God created women lovely and sensitive. Feminism has destroyed femininity and the loveliness of women. I am sure you have noticed this. It has made many women angry and bitter. They now fight against men rather than respecting them. Feminism has hurt men and women greatly! You can’t blame God’s will on this. Blame Satan and sin on this! God’s will is perfect. Satan is the one who kills, steals, and destroys, not God.

It’s good and godly men who will protect and provide for their families. These are Patriarchs. Evil men are simply evil. They have allowed Satan control of their lives. This is why young women need to be very careful whom they marry. They need to be wise. They need to marry a man who loves the Lord and His way.

Be watchful, stand firm in the faith, act like men, be strong.
1 Corinthians 16:13

***This post put me into Facebook jail for 30 days due to what the young man asked me and that the words “wicked men” were in his question! Lindsay Harold read it and then wrote me some wise words about men’s aggressive nature. Here they are:

The aggression of men is a designed feature, not a defect. Men need to be aggressive in order to protect the innocent and have a drive to provide for their families. Aggression can certainly be misused, but so can any good thing. Aggression misused leads to abusive husbands, bar fights, and unjust wars.

Aggression used properly leads to policemen stopping criminals, fathers protecting their children, soldiers protecting their homeland, and the building of entire civilizations through the drive of millions of men to wrest a living from the earth and build a safe place for their families.

Men’s aggression is a good thing. They were given high testosterone levels for a reason. They were given a drive to fight and build and protect for a reason. We can’t let the misuses of this good thing lead us to hate men of their God-given design or to deny them the leadership role God gave them. Aggression is an important reason that men are designed to be leaders. Good leaders have to protect those under their care.

A woman doesn’t make a good leader, in part, because she doesn’t have the aggressive impulse to drive off the wolves – whether literal or metaphorical. It is the masculine drive to fight those who would cause harm and protect the vulnerable that is so necessary in leadership. In our safe and prosperous society, built by many men over many generations, we have too often forgotten how much we depend on the aggression of men.

Thus, it is not true that the aggressive instincts of men makes them poor leaders. Nor is this is reason to avoid placing men in leadership in their homes and churches. We must be careful to make wise choices of who will lead us so that we choose men of good character. But we can’t condemn all men for the evil actions of a few. Aggression is not a reason to deny the leadership of men. Aggression is not a moral failure. It is a tool given to men that, when used properly, is a benefit for all society.