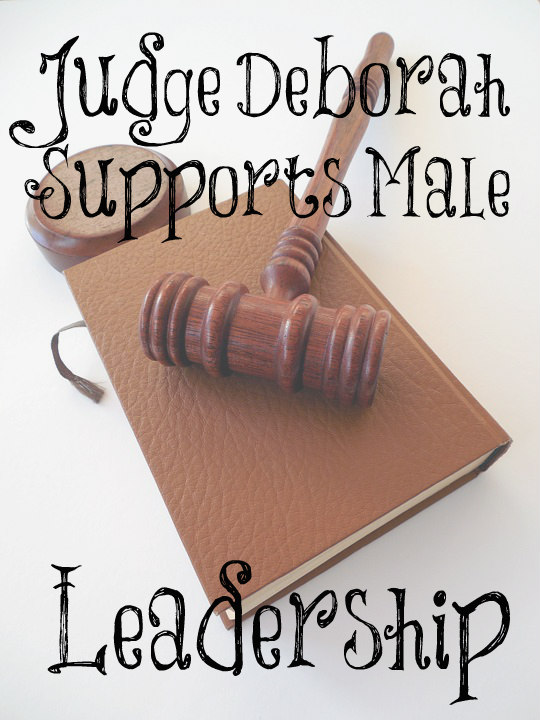 In almost every post I write about God ordaining men to be those in authority, women will use the example of Deborah in the Old Testament. Here is a great response to this argument written by Scott LaPierre.

Judges were Israel’s primary rulers for almost three-and-a-half centuries. They also commanded armies, making them some of Scripture’s strongest leaders. So why did Deborah serve as judge? Her position is often the first mentioned to support female leadership. Does she conflict with God’s pattern of male leadership? Let’s take a look!

1. There’s no mention of Deborah being appointed by God

Throughout the book of Judges, as men rise to leadership, verses identify them as chosen or empowered by God:

But with Deborah there is no recognition of God’s appointing. Judges 4:4 simply says, “Now Deborah, a prophetess, the wife of Lapidoth, was judging Israel at that time.” Her introduction emphasizes that she is female, but in a negative light. Wayne Grudem, co-founder of the Council on Biblical Manhood and Womanhood, explains in Evangelical Feminism & Biblical Truth (p. 134):

“Judges 4:4 suggests some amazement at the unusual nature of the situation in which a woman actually has to judge Israel, because it piles up a string of redundant words to emphasize that Deborah is a woman. Translating the Hebrew text literally, the verse says, ‘And Deborah, a woman, a prophetess, the wife of Lapidoth, she was judging Israel at the time.’ Something is abnormal, something is wrong—there are no men to function as judge! This impression is confirmed when we read of Barak’s timidity and the rebuke he receives as well as the loss of glory he could have received.”

2. Deborah’s ministry was private versus public

Judges 4:5 says Deborah “would sit under the palm tree . . . And the children of Israel came up to her for judgment.” The nation approached her privately. She didn’t publicly teach God’s Word. Like Huldah and other prophetesses, she is another example of a woman limited to private and individual instruction. Even when Deborah calls for Barak, Judges 4:6–7 shows her speaking to him privately:

“Then she sent and called for Barak the son of Abinoam from Kedesh in Naphtali, and said to him, ‘Has not the Lord God of Israel commanded, ‘Go and deploy troops at Mount Tabor; take with you ten thousand men of the sons of Naphtali and of the sons of Zebulun; and against you I will deploy Sisera, the commander of Jabin’s army, with his chariots and his multitude at the River Kishon; and I will deliver him into your hand?'”

Notice several phrases in the above verses:

The statement “Has not the Lord God of Israel commanded?” shouldn’t be understood as Deborah giving orders to Barak. As a prophetess, she received a word from God and passed it along to Barak. She confirmed what he already should have known, that God commanded him to lead the army.

The directive, “Go and deploy troops,” is particularly significant because Deborah was judge at the time. She was in the position typically occupied by Israel’s commander. But rather than summon the troops herself, she let Barak know that God called him to command them.

The phrase, “against you I will deploy Sisera,” reveals God’s plan for Sisera to attack Barak, not Deborah.

“I will deliver him into your hand” indicates God wanted Barak, and not Deborah, to claim victory over Sisera.

All this shows that even while serving as judge, Deborah affirmed the rightness of male leadership, not only looking to Barak to lead but letting him know this was what God wanted. Sadly, Barak didn’t step up but instead told Deborah, “If you will go with me, then I will go; but if you will not go with me, I will not go” (Judges 4:8). We recognize something isn’t right when a man tells a woman, “I won’t go to battle unless you go with me.”

Not surprisingly, Deborah confronted Barak about his reluctance: “I will surely go with you; nevertheless there will be no glory for you in the journey you are taking, for the Lord will sell Sisera into the hand of a woman” (Judges 4:9). Deborah’s prophecy came true. God routed Sisera’s army before Barak, but it was a woman, Jael, who ended up defeating the enemy commander (Judges 4:17–22). Barak should not have insisted Deborah accompany him but instead taken leadership himself.

This entire account is not advocating for female leadership but is instead presented as a criticism of Barak. The book of Judges records some of Israel’s worst days, and the absence of male leadership is a strong reflection of the time. Deborah’s judgeship actually served as a rebuke to the nation regarding the absence of male leadership. Later, during another dark period in Israel’s history, the prophet Isaiah asserted that women ruling was a sign of God’s judgment: “As for My people, children are their oppressors, and women rule over them. O My people! Those who lead you cause you to err, and destroy the way of your paths” (Isaiah 3:12).

5. Deborah and Barak are descriptive, not prescriptive

The book of Judges describes the breakdown of leadership among God’s people: “In those days there was no king in Israel; everyone did what was right in his own eyes” (Judges 17:6, 18:1, 19:1, 21:25). In general the book of Judges is presented as an example not to follow; it is not prescriptive.

Is there application for today? Definitely:

When men need their wives to tell them to take the family to church, pray, or read the Word, they are acting like Barak.

When a wife is urging her husband to lead and a husband resists or prefers that his wife take charge instead, he is following Barak’s example.

If there is an example to be followed here, it is Deborah. She encouraged Barak to lead, told him what God desired of him, and rebuked him when he would not take charge. It is also worth noticing what she did not do. When Barak refused to lead, she did not take control of the situation herself but rather let God direct Barak’s steps and victory. Her story should motivate women to do what she did, and Barak’s failure should motivate men to avoid the mistakes he made.