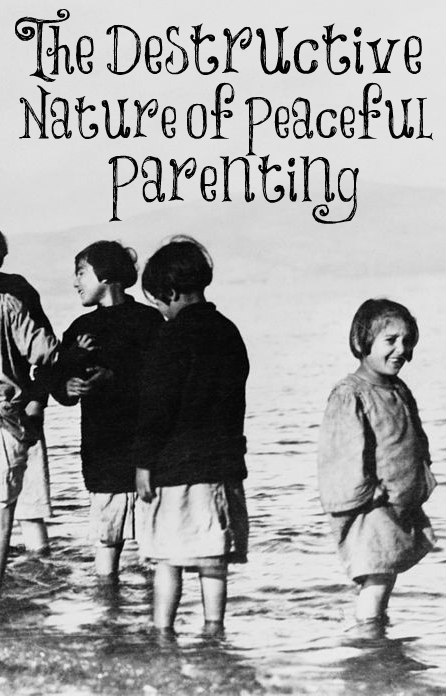 No one would say that children are better behaved than they were generations ago when parents weren’t afraid to discipline their children and say “no” to them. Now, there are a bunch of entitled adults running around acting as if the world revolves around them and feeling entitled to having anything they want when they want.

A man who believes that “peaceful parenting” is the best way to raise his son wrote this on Facebook:

“I have no interest in raising my son to be obedient or compliant with my demands.

Therefore, the questions I ask myself are things like: Is he happy? Is he feeling connected with me? Is he satisfied with life?

The questions I don’t ask are: How do I get him to behave? Why doesn’t he listen to me? How can I stop his whining or, how do I just make him leave me alone?

And when that kind of contentious attitude comes up in myself, I don’t try to fix him or change his behavior as the solution.

Instead, I look within myself to see where it is that I need the attitude adjustment.

When we adults learn to change our attitude first, is when everything else works out with our children. As simplistic as that may sound, it is the way it works.

What we are really after is our own inner peace, our own inner wisdom and our own well being, and from that place of wholeness, we are then better able to take care of our children, lovingly, peacefully, joyously.”

He has decided to be a friend to his child instead of parent him, sadly. Here are responses to him from the wise women in the chat room:

Verna: “It sounds like he will be raising a selfish person who expects everyone to cater to them. Which is not how I want my children to behave. Furthermore, this child will likely have problems obeying and surrendering his will to God, since it wasn’t a concept available to him as a child. I would be very concerned for his soul.”

Sarah: “Honestly, I feel teaching your children how to mind and be obedient/compliant IS in their best interest and for their well-being.”

Lindsay: “It is in the best interest of children to obey their parents. Children don’t know what is best for them. That’s why God gave them parents to make decisions for them and to train them in what is right.

There are certainly times that we parents need to change our own behavior and attitudes. We are imperfect, after all. But if we approach every conflict with our child as if we are the ones who need to change, we are simply incorrect. Children are not born perfect. We shouldn’t treat them as if they are. They need parents to train and guide them, not to worship them as if they are little gods.

Treating children as if they are correct and we are the ones who are wrong is basically worship of the children and is not only misguided, but not good for the child either. A child who grows up worshiped by his parents will have no respect for others and will be dependent on others to stroke his ego. This makes for very unhappy children who also are not inclined to obey or worship God because they think they are the ones worthy of worship.

If you want your children to grow up to be happy, healthy, well-balanced, and properly understand their relationship to the world and to God, you must train them and discipline them, not treat yourself as the problem that needs to be fixed.”

Samantha: “This kind of parenting leads to spoiled rotten brats that have no respect for anyone or anything in my opinion. I am appalled at some of the behavior some parents allow their children. When my husband and I were waiting on a table at the Olive garden there were four boys with their parents and all four were just yelling at the top of their lungs and the mother just gave them a pouty face and never once told them to be quiet. I get complimented quite a bit by how well behaved my kids are when eating out. I would of pulled my hair out years ago if I had allowed my kids to act like that.”

Brooke: “I feel like a lot of this parenting is a direct result of the first generation of real daycare kids now becoming parents. So many people in my generation have been left with gaping holes in their heart and development because they were raised by daycare while both parents worked full time. They KNOW something was missing from their life, and they often don’t want to blame their parents, so they think if they do something different than how they were raised, their children won’t have this emptiness they feel.

This happens at the same time as my generation was raised during the evolutionary boom of technology. Instead of searching within themselves and identifying the problem, it’s easy to go online and find ‘studies’ to prove how things should be done differently. You can support any side of an argument off the Internet, but that doesn’t mean any of them are correct.

A generation of parents were dropped off at six weeks old to be raised by the industry. Then sent to school and overwhelmed with extra curricular activities so they weren’t considered ‘latch key’ and those whose mothers were too busy working the feminist agenda to care for them. Now feeling sad, hurt, neglected and empty and trying to raise their own children without the same hurt they experienced.”

13 thoughts on “The Destructive Nature of Peaceful Parenting”