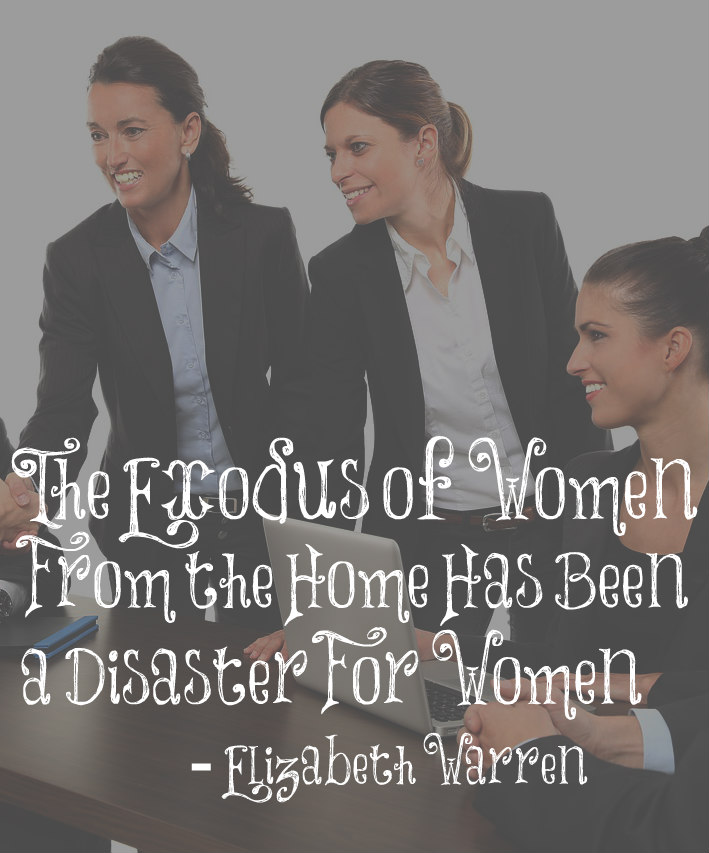 In an article called The Forgotten Reactionary Elizabeth Warren, the author wrote this about Ms. Warren’s book The Two Income Trap: “Its wide-ranging conclusions are too numerous to summarize here, but the central one is that, generally speaking, the exodus of women from the home into the workforce that began in the 1970s has been a disaster for women, who find the infinite responsibilities of child-rearing compounded with the drudgery of wage labor; for families, who are now twice as vulnerable to the pitfalls to unemployment — a disaster for everyone, in fact, except corporations who have benefited from the vast pool of cheap and readily exploitable labor provided by women over the last four or so decades: ‘As millions of mothers poured in the workplace,’ Warren writes, ‘it became increasingly difficult to put together a middle-class life on a single income. The combination has taken these women out of the home away from their children and simultaneously made family life less, not more, financially secure. Today’s middle-class mother is trapped: She can’t afford to work and she can’t afford to quit.'”

What is her solution to this problem? “…a generous financial subsidy for stay-at-home mothers…” She, along with many others, fail to see that high and higher taxes simply puts more burdens upon families not less. No, the solution is to drastically cut taxes and allow families to keep a lot more of their own money. But Democrats solution to everything is bigger and more intrusive government that is destroying our nation and causing more and more people to have an entitlement attitude as if they are owed stuff without working hard for it.

It’s refreshing to see, however, that a left-learning Democrat like Elizabeth Warren at least is honest enough to see that mothers are needed in their homes. That the “out there” that women were promised isn’t so great after all. Working for a boss, a time clock, and a paycheck can’t compare with being in one’s own home nurturing one’s own children with a husband who provides and the security the home gives to the family.

Mothers leaving their homes has ended up making it harder for mothers to be home full time. I can tell you that nothing that goes against God’s will for us ends up doing anything good. Even a leftist Democrat can see that mothers leaving their homes was a very bad idea, yet I can’t convince the thousands of women who read what I write that mothers at home with their children is a very good thing.

I want to dispel the notion that a middle class mother is trapped, however. There are many middle class mothers who are making it on their husband’s income. They live frugally and simply because they know their value at home far surpasses any paycheck they could bring home. Their children need them more than they need stuff, vacations, or other luxuries in life.

Many of the women in the chat room are middle class families but are content at home with their children. They are wise women who are building their homes up. They do without so they can have what truly matters. Their eyes are set on eternity and their children’s eternal souls instead of the latest and greatest new technological gadget. Plus, they understand that what God commands He provides. They know God wants them home with their children. They know that God is their ultimate Provider so they live in trust of Him; for with Him NOTHING is impossible.

To be discreet, chaste, keepers at home, good, obedient to their own husbands, that the word of God be not blasphemed.
Titus 2:5