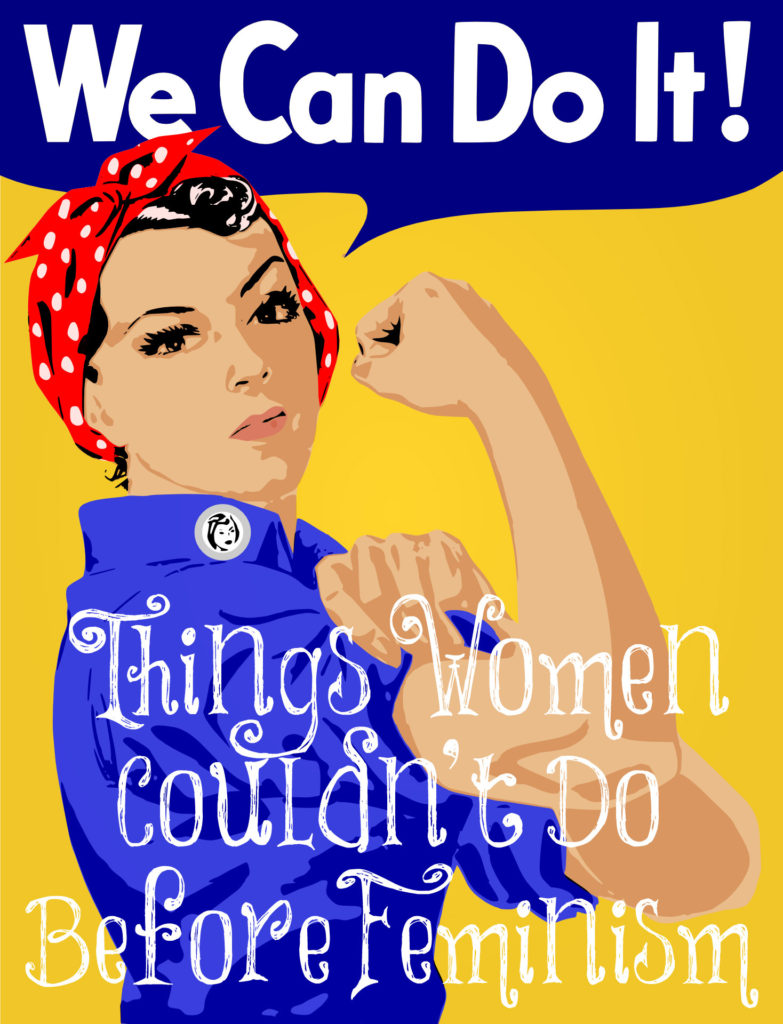 Everyone seems to rave about what feminism has done for women and how great it is for them. I happened upon an article called 11 Ordinary Things Women Weren’t Allowed to Do in the 50s and 60s. As you can imagine, I was curious to see what great things feminism has accomplished.

Number one: Open a bank account. Okay, this is an okay one, although I would have been fine without it. My dad supported me until I got married for the most part and then Ken took over so for me, this wouldn’t have made a huge difference in my life. I will give feminism a point for this one.

Number two: Serve Jury Duty. Blech! It was feminists who accomplished this for us? No thanks. I am always trying to get out of this one since I want to stay home and keep to my duties here instead of going to jury duty, plus I have struggled with my health for many years. I am not sure many women love going to jury duty. A point taken away for feminism in this one, in my opinion.

Number three: Practice Law. Nope. Men can do a fine job doing this. What have women lawyers fought for that was worth much except for more freedom to abortion, free daycare, and things of this nature? I know there are some great women lawyers who are fighting for good things like the life of a baby but some wise men could do just as well. Besides, being a lawyer makes women much less feminine because they have to be argumentative and loud to state their case. It would be difficult for them to have a meek and quiet spirit as the Lord calls women to have. No points for this one.

Number four: Take birth control pills. Horrible! This has led to the slaughter of over 54 millions babies in the womb since women can now decide to control their fertility. Once women could take control of their fertility, it has led to more sexual immorality, terrible side effects, and less children. Minus 54 million points on this one.

Number five: Go on maternity leave. Yes, make it easier for women to leave their jobs for a few months to be with their children who they will then leave in the hands of strangers to raise. No thanks. Negative points. (Remember, it was feminists who fought so hard for women to leave their homes so they could have careers. Now, they have to fight for many other things that makes the government bigger and taxes higher to support them in this cause. Next, all of the tax payers are going to have pay for child care. All have been terrible for children and society since they need and want their mothers home full time.)

Number six: Breastfeed in public. If it means that a woman can breastfeed with her breasts completely exposed, it is a bad victory but if it allows for a woman to breastfeed covered up, it’s a great one. It’s a draw on this one, depending on what they were fighting for.

Number seven: Attend an Ivy League University. These are full of humanistic teachings, anti-God, feminist’s teachings, and nothing about what God desires women to do and be. Negative points.

Number eight: Attend a military academy. In the Bible, everyone that went to war were men at least 20 years of age (Numbers 1:45). This is how God planned it to be and it should have always stayed this way. Fighting wars is not a place for women. Period. Negative points.

Number nine: Run the Boston Marathon. This one doesn’t matter to me. I see no harm in women running that long if that is what they want to do but for Christian women to spend so much time in preparing for this seems a waste of time to me. They get a point for this one.

Number ten: Serve in combat. See number eight. Blech! To me, this is wicked, especially since they are thinking about drafting women. Thanks a lot, feminists. Multiple negative points on this one.

Number eleven: Become an astronaut. I am not sure why a Christian woman would want to pursue this since it has nothing to do with what God has called women to do and it ministers to no one but if a woman wants to do this, so be it. Feminism gets a point for this.

Feminists get a few points for things I don’t care about at all and I am sure God doesn’t care about any of these things. Did you notice at the beginning of the article, the author wrote, “seeing the things my mother and grandmother were forced to endure.” It’s as if women were beaten, stoned, and treated like slaves before feminism came on the scene. I have heard this a lot. They act as if feminism has been a woman’s savior, but in my mind, it has been a woman’s demise. The world’s ways are not God’s ways.

They also claimed that a wife was “legally classified as subordinate to her husband.” Wives being under the authority of their husbands is a good thing since all of God’s commands for us are the best for us, but God uses the word “submission” and not subordinate. Feminism likes to use this word to twist what God has commanded. Submission brings harmony to a home, if the husband is not an evil and abusive husband. (Submission of a wife does not cause a man to be abusive contrary to popular opinion. An abusive man has an evil heart.) All this means is that women and men have different but valuable roles in marriage.

Stop listening to the lies of feminism and the supposed “triumphs” they have gained. They have only gained them because men have let them. It’s nothing they could have done without men stepping aside and allowing it.  (I am very sad they stepped aside in all things having to do with the military and protection of our country. What were they thinking?) You can see from this list that the negatives far outweigh the positives and the negatives have been exceedingly detrimental to this culture, especially for the least among us, the children. Nothing that they have accomplished is important to the Lord and this is all that is important to me.

Wherefore I was grieved with that generation, and said,
They do always err in their heart; and they have not known my ways.
Hebrews 3:10

19 thoughts on “Things Women Couldn’t Do Before Feminism”