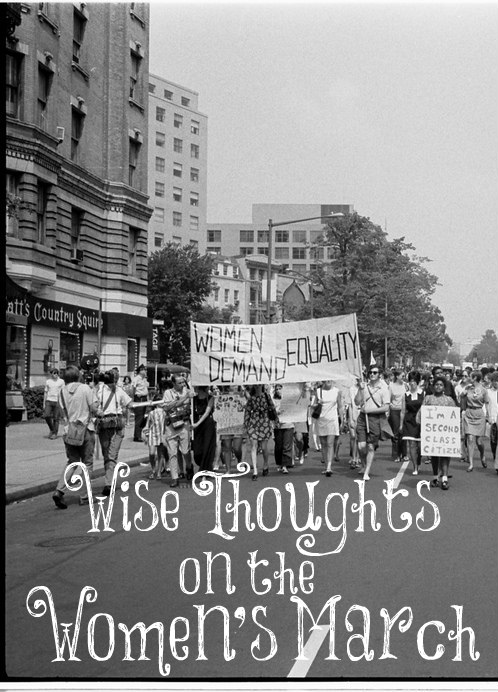 As many of you watched the many feminist women march on Saturday for the murder of unborn babies and the “end of patriarchy” whatever that means, the women in the chat room were discussing it and had very wise thoughts concerning it. I want to share some of them with you, but first I wanted to share what I thought about Madonna’s speech since she was one of the main, famous speakers.

“Welcome to the revolution of love. To the rebellion…” with some vile language afterwards. Love and rebellion never go together in the Word of God. “Where not just women are in danger but all marginalized people.” Oh yeah, Madonna, go to any of the Islamic countries and see what real marginalization and danger of woman looks like. You are a rich woman who lives the high life and lacks NOTHING. “The revolution starts here. The fight for the right to be free, to be who we are, to be equal. Let’s march together through this darkness and with each step.” She is living in darkness but she doesn’t even see it because she is blinded by the prince of the power of the air and believes wrong is right. Women will never be equal (the same) as men because God created us male and female. “Yes, I have thought an awful lot of blowing up the White House, but I know that this won’t change anything…I choose love. Are you with me? Say this with me: We choose love. We choose love. We choose love. Love…thinks no evil (1 Corinthians 13:5). Love does no wrong to a neighbor (Romans 13:10).

And if you think it was a peaceful march by good women to protest President Trump’s behavior, why didn’t they protest President Obama when he fully support the murder of full-term babies, same-sex marriage, and all types of perversions. He didn’t support Israel, the police, or the military. Where were they then? Why didn’t they allow those women who were pro-life to march with them if it were for ALL women? Because this is a tweet from the Planned Parenthood President: 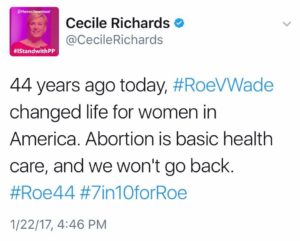 No, Cecile Richards, abortion is murder plain and simple. This is why you fight sonograms being given to pregnant women who come into your clinics. You don’t want them to see the life that is growing inside of their womb so you can sell the “blob of tissue” parts for a lot of money. There are six things which the LORD hates, Yes, seven which are an abomination to Him: Haughty eyes, a lying tongue, And hands that shed innocent blood. (Proverbs 6:16, 17)

Now for some wisdom from godly women who are in the chat room.

“I think that on some level, women who vehemently and aggressively fight for ‘women’s rights’ in the form of free health care for anything having to do with abortions, birth control, periods, etc. are mad because they are the sex that has to bear children. Instead of being honored at that amazing gift God has given our bodies, the liberal feminist mindset has ultimately begun to see and preach children as a burden in every sense: periods aren’t fair (even though getting them is a necessary part of our bodies’ ability to bear children), birth control needs to be provided because one should always be able to have sex without any ‘consequences’ just like men because they never have to bear children, and abortions must be provided because women need another option to be ‘consequence’-free. I think they believe men have it so much better because they can live life and never have to be affected by having a child, which they see as a burden. If only people could follow God’s ways! Wait until marriage, stay faithful, and welcome children as blessings!”

“Quite frankly, Lori said it perfect….FREE IS NOT FREE!! Just because you get cheaper deductibles and premiums, low or no cost prescriptions and free screenings/exams, does NOT mean they are free. You can bet your last dollar that the provider CHARGES for those. That means, someone has to pay it. It’s us, the overtaxed and underpaid. It’s my husband who works six days a week, 52 weeks a year, 45 mins away from home. It’s me who scrimps and saves every penny. It’s my kids who I have to weigh if I want to take them to the doctor because I have to pay the first $3,000 each for them. It’s us who pays 15% of our income to premiums that still mean I’ll be paying out of pocket every single time we go to the doctor. It’s my kids who have second hand clothing and don’t participate in any paid clubs. It’s the burdened middle class who pays for this. I cannot afford it, but I don’t have a choice. It’s taken from me and redistributed regardless.

I understand it’s hard to know the weight of these financial responsibilities. But, it’s still not others responsibility to provide for me as it SHOULD not be mine for them. Free is not free.

I saw a great analogy. When you are in a nature preserve, there are signs that say do not feed the animals. Why? Because then the animals will never learn to fend for themselves.

Big government redistributing my husbands earned income is not FREE.”

He that walks with wise men shall be wise:
but a companion of fools shall be destroyed.
Proverbs 13:20

In order to join the chat room, you must be a Christian woman and you must fill out the application as requested. Thank you!

3 thoughts on “Wise Thoughts on the Women’s March”