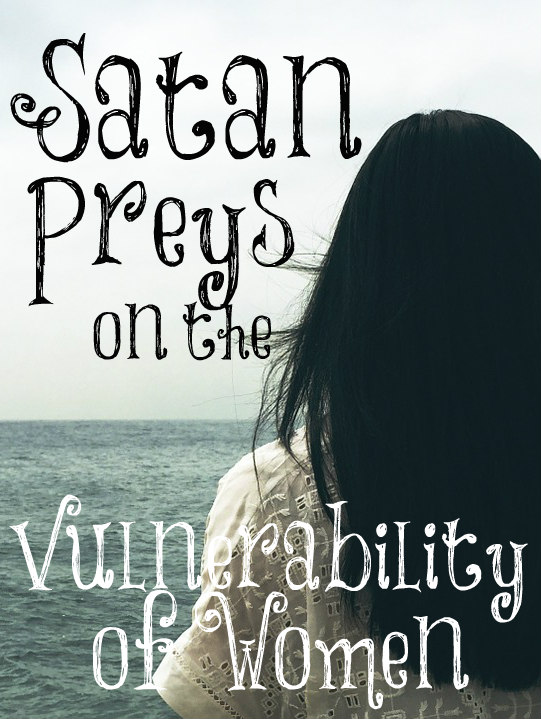 A woman wrote me this letter recently and I thought many of you would enjoy reading it. I do love receiving letters from wise women who read my blog because they give a different perspective.

Interesting circumstance yesterday morning in doing some on-line research for my husband, I came across a blog posting on “Why Your Pastor Should Say ‘No More to Beth Moore.” With hundreds of comments listed, I began reading. Whew! Took a while. As I read, I realized anew why God has NOT “ordained” women to teach the scriptures; they are EASILY deceived, persuaded, with the emotions playing a huge part in the processing! The last post, posted just this week, (by a man! ha) pretty much sums up all the previous ones, the major
portion being written by women:

“After reading through a majority of these comments, I am convinced that this sums up the entire state of American Christianity in 2017. I can’t believe how many people want to twist and spin Scripture around to make it say what they want it to say. One person even went as far to say something along the lines of  ‘Don’t allow the Bible to tell you how to reach people!’ which I am not even sure how someone could physically type those words.

I mean I totally understand someone who claims to be an unbeliever having a problem with what the Bible says, but I just can’t wrap my head around someone who claims to be a follower of Christ yet completely ignores what scripture clearly states. I can’t explain how many times I’ve had a discussion with someone and they have replied ‘God would never say that’ when I have directly quoted Scripture to them.

Josh, thank you for this article. I appreciate anyone who firmly stands on the truth of Scripture and wants to honor Him above any man or woman, especially when it comes to calling out a popular false teacher. May God bless you and continue to give you strength as you further His kingdom through this ministry.”

After reading that article/comments, I sat back, tried to get my mind back in focus, and thought, “Oh, I haven’t yet read Lori’s blog for today.” So imagine my utmost surprise when I read the title “Why Don’t Women’s Bible Studies Teach Submission.” And then I checked out Timothy Hammon’s article. I believe the Lord allowed the timing of my reading to, once again, show that HIS word is true….always. We just need to obey. Nothing MORE, nothing LESS! It’s really pretty simple (but very difficult to put in practice?). I guess that’s why, as human beings/sinners, we think there is always something “more” we should be “doing.” In the end, we really don’t believe God, or His word, is sufficient/enough.

My husband and I were discussing this “women’s” issue once again. Interesting, isn’t it, that Satan went first to Eve, who, at this point, was still sinless/perfect. According to what the scripture says, Adam may have been right there beside her. Why didn’t Satan go to Adam? Did Satan sense vulnerability in Eve’s God-created “emotional” make-up?…..as well as in Adam’s “ego?”

You know, “Women’s Bible studies” (as known today) haven’t always been. I remember when they came into vogue (late 70’s/80’s) in the local church, especially the larger churches (having been a part of one of those larger “bible” churches during that time. I remember well the discussions for/against).

Growing up in a Bible-expositing church in the 60’s/early 70’s, wives/women generally practiced/modeled the truths of Titus 2. (Of course, there were/are always exceptions. As I was thinking through this, interestingly, I realized that almost all of my high school friends’/200 classmates’ moms, most probably unsaved, did also….very few exceptions!!) Anyway, the women felt no need for “extra” bible studies.; too “busy” at home putting Titus 2 into practice? …. taking care of my husband, children, home? I do remember a Ladies Missionary group, that met once a month to help missionaries in a practical way (or even church people, elderly/neighbors/community) i.e. making blankets, preparing some foods, cleaning homes, etc. etc. During the summers, I’d get to
accompany my mother and help also.

So, what happened? While studying women’s issues over some years, it became clear to me, that, when (Christian?) women in the church began listening to, and being educated by, the world’s philosophy (college/women’s lib/etc.), forsaking (deciding for and by themselves) submission to their husbands, not bearing children (or just “a few”), putting the ones they
did have in day-care, leaving their home for the work-place, becoming “equal” with their husbands in providing, “status,” etc….. that they then, sub-consciously(?) began feeling a void, lack of inner satisfaction/fulfillment, possibly even some sort of guilt and began searching for something that might fill the void. And, not being challenged/encouraged/reprimanded(?) by the church pastor/leaders to get back to doing what the scriptures teach, the “emptiness” was rationalized away by….oh!…doing a “spiritual” thing…..“let’s get together/socialize/talk, encourage each other (in our ‘woes), but we’ll justify it by doing something ‘spiritual’…by studying the BIBLE!”

But would Titus 2, Ephesians 5, and Colossians 3 be the first passages to search out? Of course not! The “doctrinal/heavy” issues are of most importance to we “thinking/educated/knowledgeable/wise” women! And we don’t need a man to teach us either. We have the Holy Spirit! Sunday morning teaching is just not enough to “minister” to us (emotional, many-faceted) women. We are a “separate” class; a man can not know all that pertains to us! (facetious-ness off)

And Women’s Bible studies became a structured (“cemented!”) part of the church to “help” our women become “true” women of God. Hence, the question of your blog of  January 6! You see, however, Titus 2 et al. “CAN’T” be taught, because it was “discarded” in the first place to get where they are now! (Teachers in front of large audiences, conferences, in pulpits, “revered” as “women of the Word,” a.k.a. Beth Moore, etc.)

As my husband has often said just as Satan went to the woman in the garden (the “Achilles heel” of the marriage relationship?), so he has captivated emotional, un-discerning, un-submissive women today. And, in the process, God’s word is blasphemed. God is not seen as HOLY! It does bring tears to my eyes/heart.

I appreciated your response on the blog to Tami. VERY sad to say, but her thoughts speak pretty much for the majority of women in the Church today who would call themselves genuine believers! AND…on the blogs. (huge sigh, sometimes it IS despairing)

It’s become the biggest straw man; the most-used EXCUSE for casting blame/responsibility onto others. And for trying to establish/rationalize disobedience to the scriptures. The EXCEPTION has now become the rule. Unfortunately, church leaders have fallen for the exception, instead of standing firm on God’s word. Biblical standards and principles are not considered, and emotionalism has once more become the barometer of any counselling taking place. Would it not be an “insightful” conclusion that “Women’s Bible studies” play/have played a MAJOR part in this scenario? I am UTTERLY ASTOUNDED at times at the audacity, arrogance, and the down-right supreme selfishness of so-called Christian women these days.

I like very much the in-put of “Dave.” 🙂 If I didn’t know otherwise, I’d think it’d be my husband. ha (It’s not) What he shared today, though, my husband has been saying for years. What he says would not have raised an eye-brow 70/100 yrs ago. Hmmmm, so, what’s changed? God’s Word? I think it’d be to a Pastor’s advantage to remind his congregation every now and then, and do what they did in Nehemiah 8:9. He gathered ALL the people together and Ezra read, from the beginning, the book. And reminded the people of history from God’s hand. Would WE weep, when we’d hear the words of the “law” like they did?

Thanks for being firm on God’s Word, Lori, and for being a blessing.

Then Nehemiah, who was the governor, and Ezra the priest and scribe, and the Levites who taught the people said to all the people, “This day is holy to the LORD your God; do not mourn or weep.” For all the people were weeping when they heard the words of the law.
Nehemiah 8:9

12 thoughts on “Satan Preys on the Vulnerability of Women”