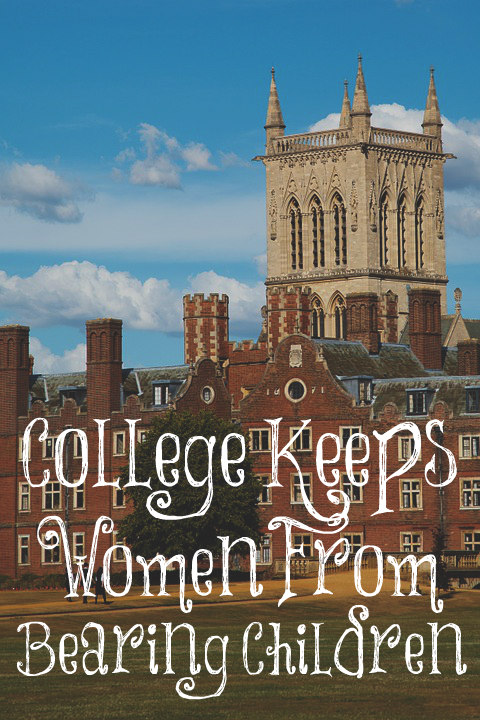 Since my viral post, I find that some women are angriest when I teach that women should carefully ponder whether or not they should go to college and that they should be keepers at home since they seem to love their careers so much. As many of you know, I have a hard time with college for women for numerous reasons. The biggest reason is that it’s opposite of what God calls young women to do and may even keep them from doing what God calls them to do. Colleges’ main goal is to prepare women for careers.

According to this article in The New York Times, I am spot on about this. “The difference in when women start families cuts along many of the same lines that divide the country in other ways, and the biggest one is education. Women with college degrees have children an average of seven years later than those without — and often use the years in between to finish school and build their careers and incomes.” Sadly, the Church has fallen for this hook, line, and sinker.

One man named Kevin wrote: “Getting an education by reading and doing research yourself, is far better in my opinion than going to college …..or as I call them indoctrination centers into the liberal leftist mindset.” I don’t remember anything I learned in college. All that I know and teach today was learned by listening and learning from godly preachers of the Word, godly older women, and studying the Word for myself.

God tells us NOTHING about women being highly educated (the wisdom of this world is foolishness to Him), having careers, or providing for their families. He gave this job to men. Even part of the man’s curse was having to do with providing for their families and a man who doesn’t provide for his family is worse than an “infidel” (unbeliever) according to the LORD (1 Timothy 5:8).

But God does command that young women marry, bear children, and guide the home (1 Timothy 5:14). He calls children a blessing and wants us to raise godly offspring. (“Happy is the man who has a quiver full of children” – Psalm 127:5.) He wants women spending their lives in producing godly, eternal beings which is a full-time job. As I clearly explained in this post, birth control and women having careers is NOT from the LORD. Raising hard working, godly children is what changes cultures for good, not having most mothers leaving their homes all day and their children in the care of others. God intends mothers to raise their own children!

You may want to seriously consider this: Are you causing your daughters to maybe blaspheme the word of God (Titus 2:5) by encouraging them to go to college thus putting off marriage and bearing children and accruing a large debt that will keep them from having children and if they do have children, preventing them from being keepers at home? As believers in Jesus Christ, we must begin pondering the paths that we are directing our daughters on. Are we going with the flow of our culture or are we basing our lives upon the Word of God and obeying Him even when it seems “ignorant” and against what everyone else is doing?

No, most men do not prefer women who are dominate, loud, and feminists. Godly men prefer feminine women with meek and quiet spirits. College does not mold women into feminine women of God. The argument that women need to go to college to find a husband is false, too. Many generations of women found their husbands without spending large amounts of money to be educated in the ways of the world.

I polled the women in the chat room on where they first met their husbands and most of them found their husbands by mutual friends. The second way was online, then church, then work, and fifth was college. We don’t need to go to college to find our husbands! God doesn’t need us to spend a ton of money on ourselves or our daughters and go deeply into debt to find husbands. I don’t see anything in His Word that tells us this. Let’s begin trusting the Lord and living our lives the way He commands; for His ways are good, and acceptable, and perfect!