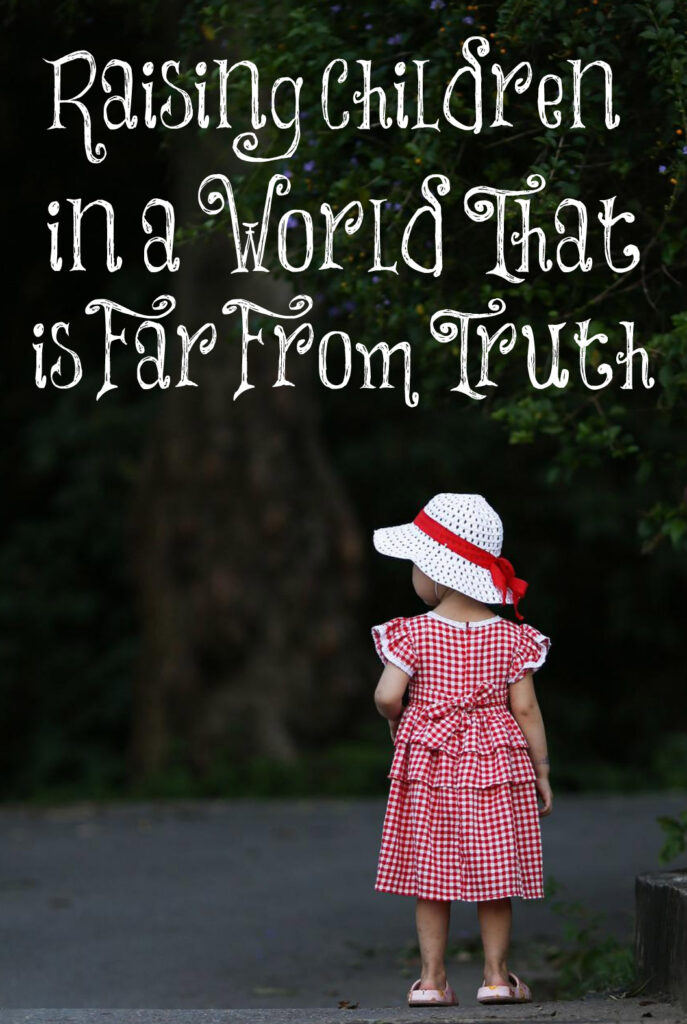 Recently, I was asked this question by Jessica: “I am curious on your thoughts on a topic regarding raising children. I am fairly traditional and a conservative Christian. I plan to homeschool my children, keep them away from secular television, books, and off social media. However, I don’t want to raise kids that grow up to be outcasts since entertainment is such a big topic of conversation. Or, I know several religious families who’s kids grew up to be rebellious and reject the biblical foundation that their parents tried to instill in them.

“I am fairly outgoing, so I don’t foresee my kids being too sheltered. But as an adult, I am not quite as susceptible to being formed by the world around me (the point being how easily influenced a kid is, not that I am not affected by seeing worldly things). I’m not sure how well I am putting my concerns into words very well but how do you suggest raising children in a world that has strayed so far from the truth?”

God commands that we raise our children in the nurture and the admonition of the Lord. He commands women to be keepers at home. There is a lot about using a “rod” in Proverbs to discipline your children and steer them in the right direction. With all of this being clear, I will tell you how we raised our children who all walk in truth as adults.

They attended elementary school in public schools. Homeschooling wasn’t that well know back in the 80s and 90s. I did begin homeschooling them through junior high, then they attended a small, Christian high school. I did my best to keep them away from secular television and books. We didn’t let them read books like Harry Potter or others just because they were popular. I didn’t care if they didn’t know who was popular in the entertainment industry. This didn’t concern me at all. I wanted them to dwell on the true, honest, just, pure, and lovely as God commands in Philippians 4:8.

There was no social media when I was raising them, so I didn’t have to even think about that but no, my children would not have smart phones until after they graduated from high school and could afford to pay for them themselves. They did have a dumb phone for emergencies only.

Don’t be concerned about your children being “too sheltered.” It’s good and wise to shelter your children from the wickedness in our culture. I shelter myself! We are to hate what is evil and cling to what is good. If you are teaching and training your children in God’s Word, they will know all about the evil in our world since it’s all mentioned in His Word. They don’t need to see it for themselves nor experience it. It only causes destruction. We are to be in the world but not of the world. We are commanded to not conform ourselves to the world but be transformed by His Word. This applies to how we raise our children as well.

There are several reasons why children “jump ship” and leave their parents’ faith to conform to the world:

One, their parents didn’t live out what they taught and said they believed. They were hypocrites.

Two, their parents didn’t make living for Jesus look appealing. There was no joy in their home. There was very little laughter. The children saw a lot more people having fun in the world than they did in their own home.

Three, their parents were legalistic in many things. Rather than teaching their children what God tells us is right from wrong, they made up their own rules.

Four, Scripture wasn’t taught clearly and often in their homes. Children need to know Scripture and hide it in their hearts.

Five, the children weren’t disciplined properly when they were young. They weren’t taught to obey, and their parents weren’t consistent. This causes rebellion in children.

Six, there was very little love given or shown. Children need a lot of love and affection from their parents.

Seventh, the parents sent their children off to be taught in godless, humanistic institutions their entire childhoods. Thus, the children were thoroughly indoctrinated into the ways of the world.

I am sure there are more reasons, but these are the ones that come to my mind and what I have witnessed through the years.

Shelter your children from evil, women. Shelter yourself as well. Don’t allow evil to invade your home or your lives. Walk with Jesus. Walk in truth. Walk in love. Show your children how wonderful living for Jesus is! In this way, they won’t be attracted to the things of this world.