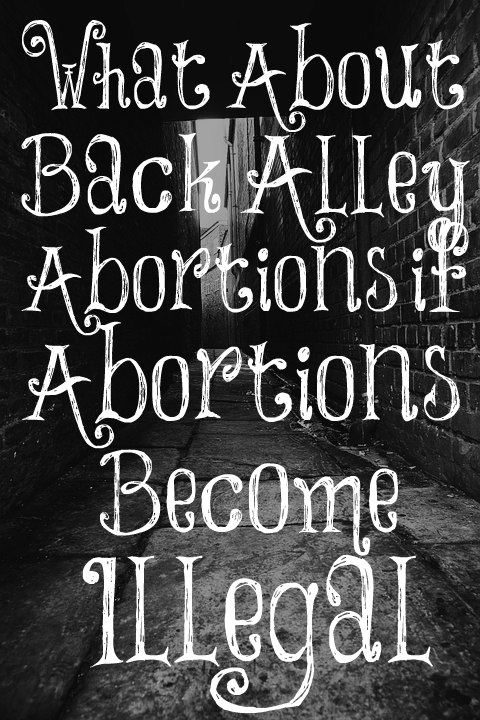 Going back to back alley abortions is almost always given when one speaks out against abortion and making it illegal. Yesterday, I shared a handwritten post on my Facebook page about making abortions illegal. If abortions are murder (which they are), then abortions should be illegal. As long as women falsely believe that abortions aren’t murder, they will continue to get them but if we call a spade a spade, then they would know exactly what they are doing (which they probably do know).

There were some good conversations going on about this topic on my Facebook page that I wanted to share with you. We must all have a good defense for truth and against the arguments against the truth. This was written by Rachel, “It will still occur if it is legal or illegal. And the back alley methods often result in death. This is a big problem. I hate abortion. I do not support it. My mom wanted me to ‘get rid of it,’ exact words, and my son will be 11 yrs old this year. Her words changed my pro-choice view immediately.”

Lindsey responded to her this way, “Sure, people still do things that are illegal. That’s why we still have murder and rape and theft and all kinds of evil behaviors that are illegal. But we have a lot less of them when they are illegal than if the government allows them without any penalty. So if we want fewer murders, rapes, thefts, and so on, we have to make such things illegal to protect the victims. The fact that the law doesn’t prevent all evil is not a reason to make evil accepted and legal in our society.

“As for women getting back alley abortions that may threaten their lives, it should be dangerous to kill someone. That’s part of the prevention. I want prospective burglars to be afraid to break into my house lest I shoot them. I want prospective murderers to fear to murder me lest they receive the death penalty. I want to use people’s natural self-preservation instinct to encourage them not to harm the innocent. If we make it safe to commit crimes, we are guaranteed to get more of those crimes. We can’t make it safe and convenient to murder children by abortion without encouraging women to do so.”

Renee wrote, “‘And the back alley methods often result in death.’ EVERY abortion results in death.”

Here’s a woman who disagreed with what I wrote, “Banning abortion won’t make it stop happening. It’ll just take away the SAFE ones causing more deaths.”

Amanda responded to her, “This is fascinating – so you believe that if abortion had been illegal all along, no Roe v Wade at all, that not only would 61 million babies be dead but also a swath of women as well? Sorry, that doesn’t add up. I can imagine a tiny percentage of illegal abortions taking place with some resulting in the death of both baby and mother. But that would be those mothers accepting that risk in addition to killing their unborn child. I don’t want ANYONE to choose death, but I cannot accept your premise that MORE than 61 million would be dead with illegal abortion.”

Finally, The Chivalrous Disciple wrote, “One of the biggest things to know about the Bible and infanticide, the Bible clearly lays out God’s plan for humanity. Save yourself for marriage, then, be fruitful and multiply. God does not talk about when infanticide is okay, for good reason. It’s not in any part of His plan. Look at all the problems we encounter when we think we know better than Him. Infanticide can never be a sanctioned act by God because it’s an act that is self serving. Everything God talks about in the scriptures is about self-sacrifice, serving others, and treating others the way we want to be treated. I’m certain that if you are reading this, you are glad you were born.

“If you are reading this and have made this decision in the past. The Bible offers hope and forgiveness through Christ Jesus. He is willing to forgive. All he requires is that we recognize our sin and turn away from it in our life.”

For You formed my inward parts; You wove me in my mother’s womb.
Psalm 139:13

6 thoughts on “What About Back Alley Abortions if Abortion Becomes Illegal?”