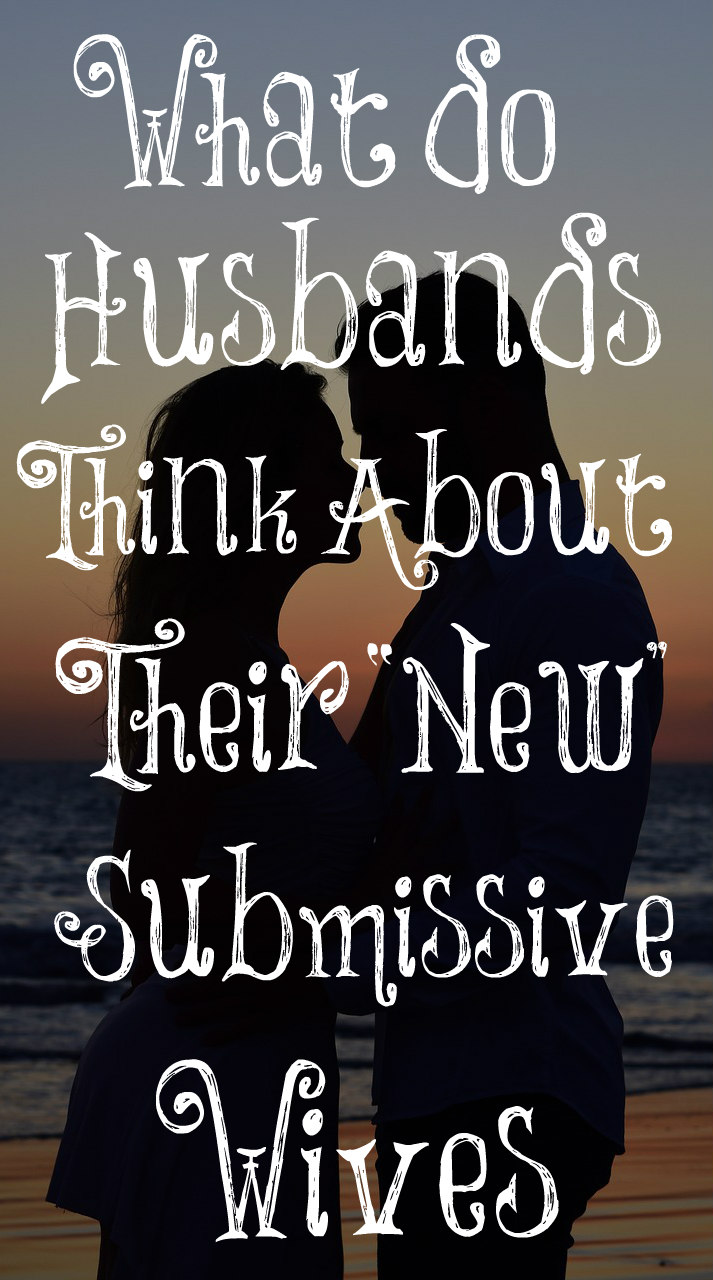 What do husbands who have wives who have become submissive wives think about their wives now? Do they like the “new” wife or do they miss the old one? A woman asked this question on my Facebook page so I decided to ask the women in the chat room to ask their husbands. Ken answered the woman on Facebook:

“I can tell you that my marriage has been revolutionized since Lori has chosen to be a submissive wife. No more arguing, peace in my home and in my own skin, love where I know that she desires to put me first now instead of last. I used to be stressed out constantly hoping I would not upset my wife by saying or doing things she didn’t like. It wasn’t overt so much as a frown on her face, a snide remark, or becoming distant and aloof. I don’t have to fear that anymore and she is so much happier knowing she doesn’t have to be in control of my and our lives. Instead, harmony reigns.”

Maggie wrote: “My husband would say that he gets to eat dinner at home. Years back I never considered starting dinner until after he arrived, then he would eat dinner at his mom’s every night before he came home and I’d be livid. It put a wedge between my MIL and him and me. Now that I know my role, he comes home to a hot meal and he doesn’t take it for granted.”

Evie: “I’ll ask him when he wakes up (still on his night shift schedule) but the main thing he always mentions is how the arguing is now nonexistent. We have literally nothing to fight about thus far because most of our past arguments derived from household chores and decisions being made.”

Molly: “My husband said out of the blue that I was much more ‘live and let live’ instead of bossy. I was really happy to hear that.”

Kayla: “’Smoother, not so much stress, and hardly any fighting’ is what my husband said. Man of few words but I’d never really asked him if he noticed a change and it’s nice to know he has.”

Michelle: “My dear husband says that there is more peace in the house. There is rarely any arguments between us. I also demonstrate my role as a wife and mother by being more joyful.”

Debbie: “He said I don’t get upset or mad very easily anymore. He likes that I get ‘upset’ now if he doesn’t let me get his food or drink refills. Being open with all things financial (purchases, etc), asking him for permission instead of just going out on my own about everything.”

Libby: “He told me our home is more enjoyable. He said before I found this group, he knew I was trying to let him lead, but he said once I found y’all I have really stepped into my proper place. He also said he is enjoying that I am teaching this to our daughter as well; that we need to take care of dad, and be happy to see him.”

Rayma: “Mine says he doesn’t believe it yet…(looks like he needs some time…I only asked for his forgiveness for my rebellious, disrespectful, unsubmissive behavior a few months ago, at which point he said he can’t forgive me, because I couldn’t change the past). BUT I can see in his actions that he is actually simply enjoying being home more. He talks to me. He has moved back into our shared room. He lets me know what his work schedule is like. He spends time with me and the kids taking day trips – things that never happened before! The BIG WALL OF BITTERNESS we both built to distance ourselves is finally cracking!!!”

Cassie: “He said that I don’t think I am in charge of the marriage any more.”

Some men have responded on my blog that they don’t want submissive wives. They don’t know what they are missing!

7 thoughts on “What Do Husbands Think About Their “New” Submissive Wives?”